As a Kashmiri, I ask, will my scars ever heal? 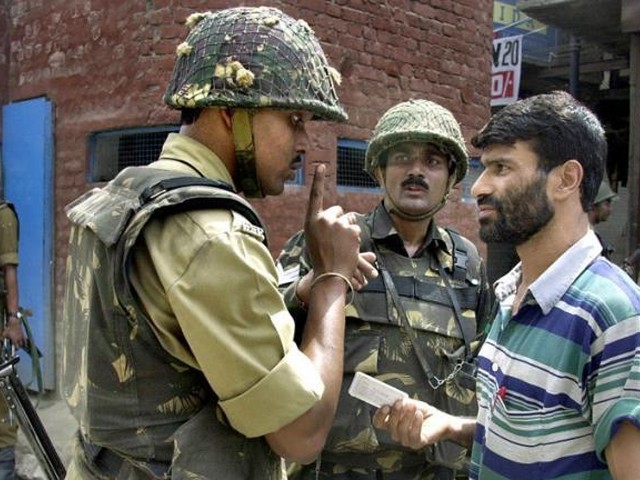 When people talk about the effects of conflict on the psyche of the youth in Kashmir, I automatically recall my experiences in a conflict-ridden Kashmir as well. With every passing murder of innocent youths in the area – such as the recent killing of Khalid Muzaffar in the North-Kashmir area of Tral, or the earlier case of the Pathribal and Machil fake encounter –  I wonder how I could have been in their place or could have ended up taking arms against the perpetrators to avenge the pain inflicted upon us.

So here I am, writing my story, a story which nearly every Kashmiri can relate to. I had never imagined that I too one day would experience what my relatives and friends had already experienced. They would often sit together and recall heart-rending narratives of their daily encounters with the government forces. During the 25 years of the on-going armed conflict, old anecdotes of Raja Rani (King and Queen) or the fabulous tales of Kashmir and its rich history were slowly replaced by daily horrendous encounters.

It was during the summer of 2007 when I used to go for tuition in the wee hours of the morning to attend a class at Karanagar, which was a few kilometres from Lal Chowk, Srinagar. Since I was always under the constant fear of being reprimanded for coming in late by my chemistry teacher, famously known as ‘Bashir Chemistry’, I would wake up at the crack of dawn. However, one particular day, I woke up late, got ready and headed out hastily, forgetting my identity card at home in the process.

With the biting morning cold gnawing at me while riding on my bike, early morning strollers on the roads could be seen and the loud and clear recitation of Darood Shareef could be heard from the loud speakers of the nearby masjid. I was lost in my reveries as usual, up until the frightful dogs started barking, snapping me out of my trance-like state. Reaching the Nawab bazaar bridge, which is less than half a kilometre away from the tuition centre, I was stopped by some Central Reserve Police Force (CRPF) men, who are stationed to keep a vigilant eye on the movement of militants. I felt my heart beat increase, as was the case whenever I would be intercepted by government forces.

The gun wielding men stopped me and shouted,

(Get off your bike and show us your identity card)

Nervous and jittery, I put my bike on its stand and started fumbling in my pockets in search for the card. Even though I knew I had forgotten my card at home, I kept checking my pockets in pretence. I knew I was in big trouble; this would either cost me a flogging or I might get away with some verbal abuse. There were eight armed personnel, and no civilians in sight. There was hardly any traffic, making the entire scenario even more petrifying. I was trembling, and somehow mustered enough courage to speak up.

“Sir, I forgot the card at home since I was in a hurry to reach the tuition centre. I am sorry, this won’t happen again,” I said in hushed tones with my head bowed down, as if guilty of a crime.

A tall and dark CRPF man approached me and started searching my bag.

“Why were you riding so fast? What’s in your bag?” he asked.

“There are books in the bag and I’m in a rush because I have to go for tuitions nearby, please let me go.”

The CRPF man shouted at me in a harsh tone,

His spine chilling tone shot down my spine and left me quivering with fear. Showing him every corner of my bag and opening every zip possible, I replied

“Look, there are only books Sir. I’m a student.”

All I got in response was a hard slap. I could feel the tingling sensation on my right cheek. I was shaking and my heart was beating fast. This gave way to the anger rising in me and I replied in a loud and firm tone,

(What have I even done? Why did you slap me?)

I stared into his petrifying eyes, keeping my head high. I told them that they had no right to use abusive language for no reason, which angered them even further since they started abusing my parents. This angered me even more and thus began a heated quarrel, during which I was showered with kicks and hits with the butts of their guns. I was trying my best to guard my head, in case of sustaining a fatal injury, but eventually I gave up resisting. A hard hit on my head left me partly unconscious for a while after which they pulled me by my hair and dragged me towards the wall.

I could hear them abusing more profusely now. The fear inside me grew more after I heard one of the CRPF men saying,

(Let’s kill him this bloody jihadi)

His voice still echoes in my ear till today. They were raging mad and looked brutal. I honestly thought this was the end for me. Regaining partial consciousness, I started crying,

One of the CRPF men kicked me hard in the abdominal area. I screamed in pain,

At this point, fortunately, a woman passing by stopped, and seeing the entire scenario, she started wailing,

Beating her chest, she screamed loudly,

Her screams began attracting some locals nearby. Before I knew it, a crowd surrounded me and one of the young boys helped me to my feet. As I got up, I was stumbling and my whole body was aching.

The locals got into a clash with the CRPF men, but as more and more people began joining in, the CRPF men eventually left, since the crowd had gotten too large for eight men to handle.

No matter how hard I try, I can never forget that incident. Everyone was looking at me and I burst into tears, not because I was in pain, but because I couldn’t believe that I was alive. The joy of being saved overshadowed my pain.

One of the spectators in the crowd was holding my bag. I still remember some of them saying,

“The boy is very lucky to be alive; otherwise they would have killed him and put weapons on his chest to show him as a militant.”

One of the locals present even suggested reporting it to police, to which someone replied,

I never told my parents about this incident, as my anxiety-prone mother would never have let me out of my house afterwards.

Many innocent youngsters leave their home to never return. They are victims of enforced disappearances. Some parents are lucky enough to receive their dead bodies, but most parents of the disappeared persons are still in search of the whereabouts of their ‘missing’ children.

My brutal experience has made me psychologically ill. The incident remains with me like a deep scar which will never heal. The incident changed me. My hopes and aspirations were crushed, my dream of becoming a scientist quashed and I lost all sense of direction.

The next day, I deliberately chose the same route but this time, my day-dreaming was predominantly taken over by thoughts such as wearing a suicide vest and blowing myself up, killing them all in the encounter. I was filled with venom and the urge for revenge was killing me from the inside.

Luckily, I opted for the pen to fight against injustice. Whenever I see men in uniform, I freeze from the inside and start feeling apprehensive. The bruises I received from these outsiders in my own home are yet to heal. The scar on me knee will heal one day; however, the deep scar on my sense of dignity refuses to heal.

The author is a Delhi based Kashmiri journalist, activist and a former students union president. He is the present chairman of Jammu and Kashmir Youth Civil Society.