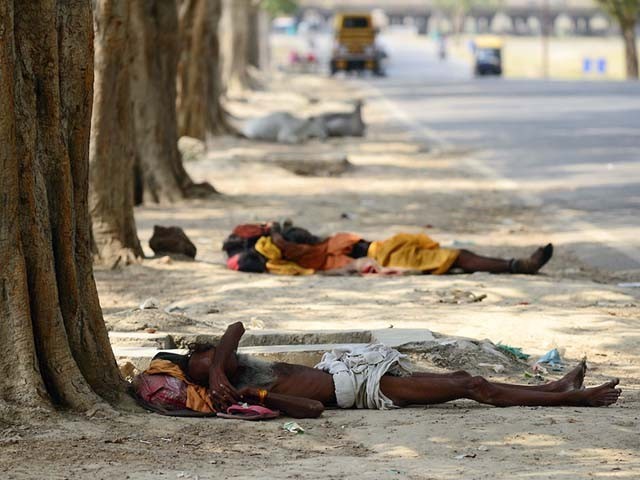 The heat wave that killed more than 1,300 people in Karachi seems like a long time ago. Concerned citizens, in the heat of the moment, promised to plant trees, but very little has been said regarding when and how this can be done.

As time is passing and cool monsoon winds are blowing away painful memories of the heat wave, the promises seem to be dissipating. Where memories are short lived, long-term efforts to mitigate a recurrence of the same catastrophe seem nowhere in sight.

That is the problem with climate change – the cause and effect, both take place over extended periods of time. In a world of instant gratifications, both individuals and governments seem to have no patience to invest in something that will not show results instantaneously.

Trees are an integral part of the environment, a part sorely missing in mega cities such as Karachi. Trees have a cooling effect as they transpire water from the ground, through the roots and out from their leaves. In addition, trees provide shade. For those who experience Karachi heat on the streets and have compared the temperature in shade and in open air know the difference.

Planting trees in this concrete jungle is the real way we can stop this from happening again. However, few people recognise the impact of planting a tree today that could potentially save lives decades later. Those who are seriously inclined towards it, often end up planting the wrong trees at the wrong places due to a lack of awareness. Other than experts, like the unsung heroes of the ‘Mera Karachi’ (My Karachi) drives for tree plantation, people may be planting trees in Karachi but are planting them wrong.

First and foremost, not every tree can bear Karachi’s temperament – what to plant should be a primary consideration. In Karachi, one thing to bear in mind is that anything we plant will have to be watered by us, as rains are a rarity and the city is already suffering from water shortage even for human consumption.

For that, water conservation and recycling is important. However, this should not be the only consideration. The Corynocarpus is hassle free, fast growing, adaptable to even high salt content, economical when it comes to watering, and is the most popular choice of Karachiites since recent years.

However, it does not provide shade as it grows almost straight and vertically. There have been studies that point in the direction that Corynocarpus causes allergies in humans who live nearby. Most importantly, its roots, when they grow deep underground in search of water, break or clog Karachi’s sewage and water lines.

In this, it resembles the harm the Eucalyptus trees caused the city earlier. The city realised 25 years later what the Eucalyptus had done. As a result, an unnecessary effort was put into cutting out Eucalyptus trees in the city, and we lost out on the city’s greenery as well. While it has the advantage of providing cheap wood and grows fast, it literally throws toxins at other plants and does not allow other plants and trees to grow close by.

A recent trend is to plant Khujoor (date) trees with full grown tree implants. However, the tree and its fruit are prone to fungal attacks due to the humid weather here. The date tree is therefore a less than ideal choice.

The best trees for the city are those that take less water and provide shade. The best example is Neem, a very smart life form, which sucks in water from underground and provides cool shade. Other sensible choices are Gulmohar (Flame of the forest), and Amaltas (Indian Laburnum). These are deciduous trees that shed leaves, which proves to be very useful for Karachi.

Indigenous varieties like Laal Badaam (Indian almond) and Jaamun (Syzygium cumini /jambolan) are also useful fruit-giving trees that give shade. Lignum is also a good option; it looks pretty, and uses less water, but takes time to become a shade giving tree. As it is a mid-sized tree, it is good to plant in areas where there are electricity wires above.

The choice of the tree you plant also depends on where you plant it and the space available. This brings us to the second consideration – where should one plant trees?

For starters, if you are planting in a place other than your lawn, make sure you have permission to do so. Make sure the tree, once it has fully grown, will not interrupt electrical wires or obstruct underground sewage or water lines, or damage any walls. A good place is dividers or the place between your boundary wall and the road. Those living in apartments will have to be more creative, and settle mostly for plants that can be grown in pots on the roof. Yet, the important role green roofs can play must not be undermined.

The ideal planting season for trees is mid-February to mid-March and mid-July to mid-August. Trees can be planted at other times too but extremely hot or cold months should be avoided. This means that it is best not to plant in April, May, June, and October.