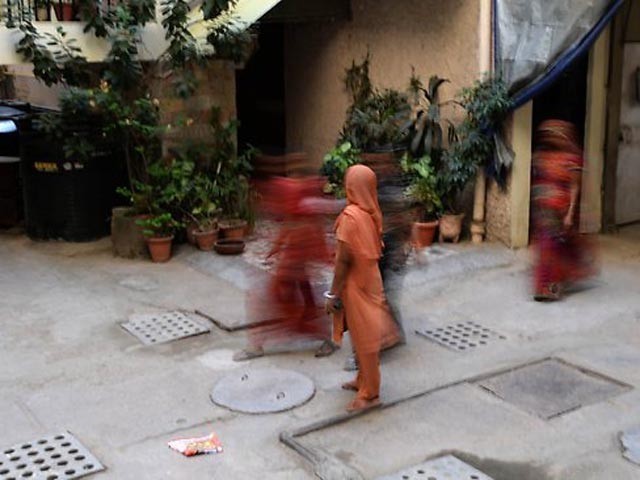 The case was the latest in a string of reports of impoverished domestic servants being abused by wealthy employers. PHOTO: AFP

Three months ago, an 11-year-old Maryam sat in my friend’s drawing room, weeping incessantly. My friend and I asked her if there was anything we could do for her, we inquired if she wanted to talk to her mother. All we got in return were confused, big black eyes staring right back at us. Maryam curled herself into a tiny ball and continued sobbing.

I felt immensely grieved because the little girl had made a long arduous journey from her village to this new house alone. My friend’s mother had asked a former driver to look for a female domestic helper; one who could help with household chores, is mature and a resident of the city so she could meet her family periodically. What she did not know was that someone completely opposite of the specified requirements would turn up.

The driver was inquired about his choice, to which he just said that the child’s parents wanted her to work because they were poor and desperately needed a source of income. There was no way she was going to go back to her parents; if not here, she would be employed somewhere else.

Now, three months later, the same girl is happy and seems to have buried all her grievances. I never see Maryam upset; she is always smiling and willing to work. One day while chatting with her, I learned something so heart-breaking it sickened me. While nothing extraordinary I believe, the underlying reality that I discovered was what was really gloomy. And the surprising thing was that she related the incidents in a tone which was carefree while laughing, rocking back and forth at times, as if it was all something really normal.

“My former employer used to beat me so much without reason and her children loathed me as well. They would tell their mother wrong things about me and she would start slapping me. Baji, I used to get so angry from the inside, but what could I do?”

Then, in a very matter of fact tone, she said,

“It’s all right, it’s the way of life. I am lower than them so obviously they could treat me like that, what else is there to expect?’’

She sounded like she was born to be treated harshly.

The physical abuse wasn’t alarming. What stung me was that these children have no hope, and what is life’s purpose if one can’t hope that someday they will be someone different from what they are today, someone better.

Wild imagination is the essence of childhood, and children grow up thinking they will become a pilot, engineer, an architect, a scientist and what not. I never really knew what I wanted, but having a life like Mr Gatsby was my childhood dream. Pretty silly, yes! Many of us come to realise that achieving all our dreams might not be possible when we step into the real world, but for these children, there is no daydreaming to be done, no fantasies to indulge in, as these children have invisible opportunities on their plate. Thinking of living the same day every day of your life must be horrifying.

Moreover, the belief that it is okay to be treated like lesser beings is heart-wrenching. Just notice the difference. I was interning at an elite summer camp and one day, a mother came towards me fuming, wanting to have a word with the administration because the music teacher had scolded her child, whereas on the other hand, a child gets beaten frequently and never complains believing that it’s what they are born for. A child so young, so naïve and so energetic comes to learn about class differences and succumbs to the inequalities imposed on them.

Treating a child with discrimination is like extracting the essence out of a flower, and one cannot expect help to be treated this way, because those employing them are literate, educated, and well-aware. Why do we even blame the government for not spreading awareness, for this is something one learns just by virtue of being a human.

I don’t know what Maryam must have been going through during her former employment, because when she came back after a week’s long vacation, she was crying once again and in between her tears, she managed to say,

“I have fallen sick, now I won’t be able to work and my baji will scold me.”

To which she was assured that she does not have to feel scared anymore, instead she will be taken care of. So scarce is the love they receive that these children are expected to work even when sick.

I hope people will eventually realise that they should treat domestic help with respect and eliminate all class differences especially when talking about children. And with the education that Maryam is now getting, I hope she starts dreaming of becoming someone who matters and is respected.

The author is an undergraduate student at LUMS. She's an environmentalist by heart and a dreamer by soul.