Five reasons not to miss the Ashes clash 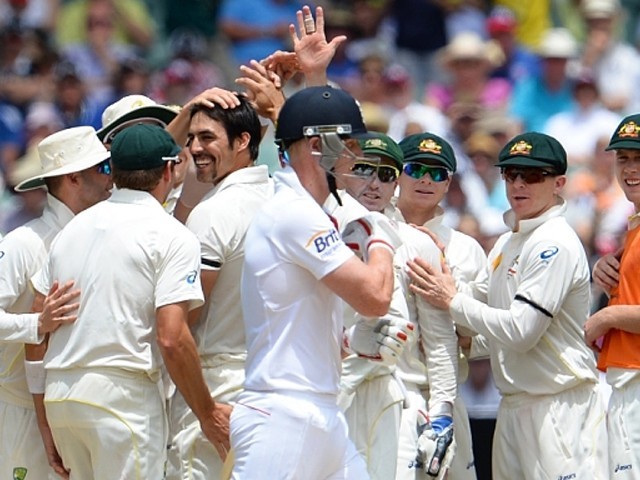 Ben Stokes is given some choice words of farewell by Australia during the 2013/14 Ashes. PHOTO: AFP

Cricket is a cranky game. It does not get along with anyone, not even the best. Australia can relate to that more than anyone else. Stepping into England with all the momentum, they were the favourites, full of aplomb.

And then they landed in Cardiff. Since then onwards, it has been a spectacular series, a roller-coaster ride indeed. It has defied what most of us had prophesied at the start – England at Cardiff, Australia at Lord’s, England at Edgbaston.

This is Ashes at its best.

So it stands at two-one in England’s favour and it is down to the Trent Bridge or Oval, if it goes that far.

Will England come out of Nottingham smiling or will it be the Aussies squaring it up? Will Michael Clarke turn the tables and bring life into the series, or will Alastair Cook display that bewitching smile of his in the post-match press conference?

Here are five reasons why you must stick to your TV screens while the two arch rivals clash today at 3pm (PST).

1. It is do-or-die for Australia

Square it up or give it up – this is the conundrum Clarke’s men find themselves in. If they’re still dreaming of pocketing that tiny trophy, they would have to put their best foot forward. Else it will jump out of their pocket.

Do-or-die – this quandary ensures that they will come out with guns blazing. But the question is, do they have enough bullets left in their armoury?

2.  No James Anderson this time

If there is any sign of relief for Australia, it would be the absence of England’s ace-man, Jimmy Anderson, the name that continues to haunt Aussie batsmen, especially after the Edgbaston debacle. Anderson plucked six wickets in the first innings, setting the tone for a hefty triumph.

Adding to the ironies of England is his record at Trent Bridge – 53 wickets in just eight Test matches at an average of 19.24. These figures suggest that England cannot find a bloke of his quality, and his absence has left them with the responsibility of filling extremely big shoes. Thus, it would be quite interesting to see how England wrestles this hiccup when they step on to the field.

No Anderson? No problem.

Steven Finn, man of the match in Edgbaston, would be the go-to man for Cook at Trent Bridge.

Eight wickets in Test cricket after a sabbatical of 18 months, he just could not have asked for a more assuaging return to Test cricket. If Steven Smith, the world’s number one Test batsman, was hand-ridden by his pace and accuracy, can be there be any other batsman to play Finn’s bullets?

Will he be able to carry his behemoth form at Trent Bridge? Will he take the on the onus in an Anderson-less attack? Let your TV screens answer these questions today.

The significance of a crowd cannot go unheeded in cricket, especially in Ashes. If it can make Mitchell Johnson bowl two yards behind the wicket, is there anything the crowd in England cannot do? The England captain said,

“This was up there with the loudest I can remember at certain moments,” says England’s captain. “Even the guys who have played a fair bit were looking at each other and realising how special it was.”

He even went on to challenge the crowd at Trent Bridge by saying,

“I suppose the challenge is can Trent Bridge be louder?”

It is up to the gaggles now, if they take up the challenge of their captain.

The Ashes series is known to be a podium where careers are defined or jettisoned. There are a number of players in this series as well who have shown chinks in their armours:

Although Bell was sagacious enough to pull his socks up at Edgbaston, all eyes will be set on the aforementioned players to see how they dictate their own demons.

Considering the meandering outcomes so far, I would not be surprised to see another cracker of a match.

Cricket is a cranky game, at last. It does not get along with anyone, not even the best.

The author is an undergraduate student at LUMS and an avid acolyte of cricket.

With his stellar skills and “explosive” celebrations, Hasan Ali has shown the cricket world what Pakistan is capable of

Should Ahmad Shahzad really be dancing with such inconsistent performances?