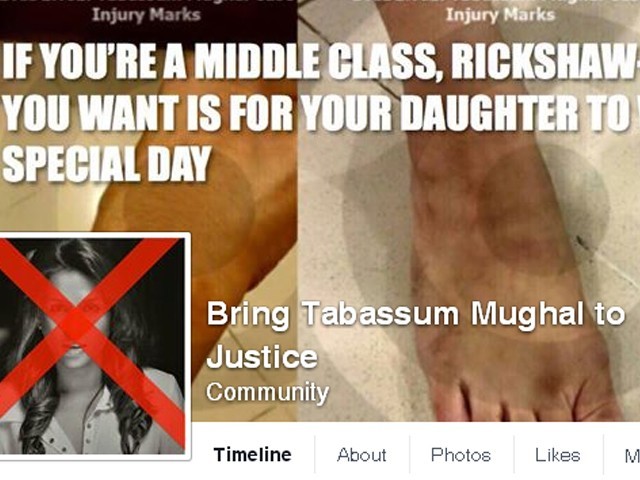 People leapt to condemn and condone the actions of those involved. PHOTO: FACEBOOK

The recent allegations surrounding designer Tabassum Mughal are widely known. She is accused of ‘beating up’ and verbally abusing a client’s mother, Shagufta Noor, when she visited the studio at the day on which the delivery of the dresses was due, and was supposedly not shown the dresses, which propelled her to demand an immediate cash refund.

Like most Pakistani saas-bahu (mother-in-law/daughter-in-law) dramas, the story is remarkably twisted. It became murkier when a complete stranger, Hira Haroon, read the client’s friend’s post on a Facebook group, and decided to help.

Daughter of a retired Army major officer, Hira approached the client’s (namely Adeeba Ahtesham) family. After pulling some strings, Hira’s father was able to register an FIR against Tabassum, which the police had allegedly refused to register earlier when Adeeba’s family had visited the station. When Hira’s father reached Tabassum’s studio with an arrest warrant and a police escort, a new side to this story emerged, the details of which you can read here.

The incident triggered massive outrage on social media when the client’s friend, Maryam Waqar, posted the entire scenario on Facebook, leaving out the ‘facts’ that were later revealed upon the intervention of Hira’s father.

As per one of the narratives, the client had ordered three outfits from the designer for her daughter’s wedding, out of which one did not meet the client’s expectations. The client, whose daughter’s wedding was apparently called off, demanded a refund for all three outfits, Rs8.5 lakhs. When Tabassum refused to give a refund as the other two outfits were ready and as per the client’s order, the enraged client started to verbally and physically abuse the manager to which Tabassum intervened.

People leapt to condemn and condone the actions of those involved. Accusations were hurled and offensive remarks were exchanged. The post was shared over a thousand times, and a state of heightened frenzy was created over Facebook as people flocked to comment and pass their verdicts.

At this point, it is hard to believe who is right. There are so many accounts offered, and all so contradictory in nature, that it is impossible to come to any conclusion. We can only wait for the intervention of the police, and hope that proper, thorough enquiry will yield the truth.

Having said that, it is tragic to see the direction this nation is headed. There were many on Facebook who were ranting about how the dresses were too expensive and Rs8.5 lakhs was extravagant madness. But that should be the least of our troubles. After all, consumerism drives the economy. And although I’ll admit I’d never spend so much on dresses girls hardly wear after their wedding events, it is a personal choice and, no, you don’t have the right to berate it.

It is the deeper issue of how there was so little tolerance demonstrated by the customer and the business alike that should bother us. If a successful designer with all the ostensible refinement of the elite couldn’t handle an errant customer, should we expect the three-quarters of the Pakistani population living under $2 a day to even think about the finer virtues such as patience, kindness and forbearance?

We shudder at the ruthless patriarchal culture prevailing in its most ugly form in Pakistan’s rural areas. If a woman’s self-respect is at risk in one of Karachi’s most chic and elegant designer studios, wouldn’t it be ridiculous to want feminism to prosper in Pakistan?

Where is civility? Why is humanity missing from the ‘land of the pure’? Supposing Shagufta Noor did physically abuse a female worker first by throwing a shoe, does that justify the reaction of Tabassum Mughal’s team in any way? Why did her throng of workers and kaarigars (craftsmen) not restrain the woman or call the police? I am not implying that the client was not at fault, she clearly crossed the line. And yet, going by the designer’s response, must we all practise the ‘eye for an eye’ law of retaliation in polite, urban settings?

We are permanently marred. As a nation, we’ve been through so much in such a short span of time – a mere decade or two – that we are left shaken and devastated. The violence this country has witnessed, the terrorism Pakistan was and is plagued with – all of it has reduced our frustrated tempers to a simmering boil. A little spark, and we flare.

You see it on roads when you’re a second too late to start the car after the signal turns from red to green and there is an angry, protesting blast of honking. You see it at wedding buffets where people jostle and elbow each other, and wrestle over the serving spoon. You see it at restaurants where people yell at waiters for any slight delay or mistake. You see it at lawn exhibitions where women fight over the dress that was the last of the season’s collection. You experience it standing in a queue where people keep pressing against you, the queue which is formed after tremendous difficulty in the first place.

In events such as these, there’s a profound sense of disillusionment. Where do notions of right and wrong disappear when the waters get slightly turbulent? Hopelessness sets in heavily. One wonders at this monotony of dread. Where is the quest for higher aspirations for revolution? How can we move on to more significant issues such as inter-sect harmony, if we fail so drastically at tackling trivial issues such as a designer dress fiasco?

It is high time we think about it. Maybe it’s time we stop the blame-game we excel at, and try to individually correct ourselves. If you lie, try not to. If you’ve ever hurt someone, apologise. If your teacher is giving a lecture, listen politely. If you mock people or crack jokes at the expense of others, quit the habit. If you can’t keep a promise, don’t make one. Show compassion, be kind to children and be gentle with elders. Courtesy matters.

You might think this stuff is trivial and insignificant in the grand scheme of things, but sustainable change begins from the bottom. As for Tabassum Mughal’s case, the truth will come out eventually, and the internet will forget about it and move on to more interesting stories as it always does. But for once, let us not forget so soon. Let us take heed and learn a lesson, before humanity and social etiquette completely collapse in our ailing society.