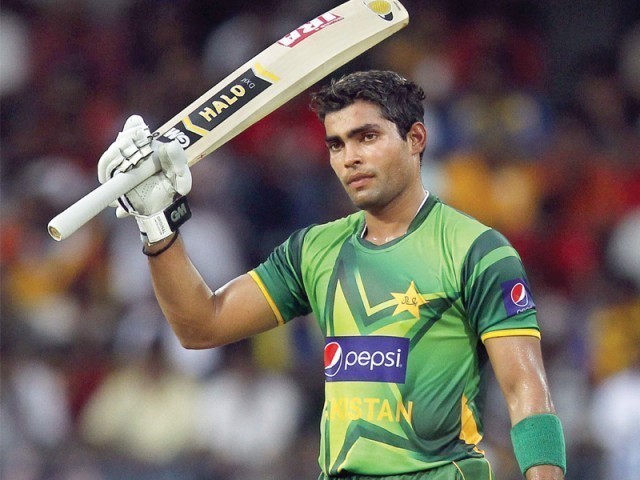 Why has he not been given the treatment he deserves by Pakistan?PHOTO: REUTERS

Manzoor, Zahoor and Saleem Elahi. Imran and Humayun Farhat. Moin and Nadeem Khan. Hanif, Mushtaq, Sadiq and Wazir Mohammad. Wasim and Ramiz Raja. This is not a listicle of the cricketing families of Pakistan, otherwise it would have also included Imran Khan, Javed Burki, Majid Khan, Anil Dalpat, and Danish Kaneria (who are cousins, by the way).

If this list is not enough, a simple Google search will yield nearly 162 families in the realm of world cricket. And the reason for mentioning all of this you ask?

Well, it is to ask a simple question: Why are only the Akmal brothers considered as being the perennial symbol of one of the greatest cricketing failure?

And more importantly, what is it about Umar Akmal that people don’t understand?

A recent article poised a question, ‘Umm Just who is this guy Umar Akmal anyway?’

Well to answer a few of their queries, he is a right-hand batsman, ‘part-time’ wicket-keeper and bats at the fifth and sixth spot most of the time – actually always.But surely, we Pakistanis, even after being a ‘cricket-loving’ nation, love to hate.

I guess Osman Samiuddin was right when he wrote in a 2014 article for ESPNcricinfo,

“Umar is cursed twice over not just because of who he is – a Pakistani batsman – but especially what he is. Which is the most utterly modern batsman Pakistan has. He is their first true batsman of the post-Sehwag age, where clear-headed intent in shot-making is a far bigger commodity in batting than many other attributes.”

I guess Samiuddin’s thought process was a little cloudy when he attributed the trait of a ‘clear-headed intent in shot-making’ to Umar. Well, why did he praise him so much? There must be something cooking for the controversy theorists’ thoughts.

Umar’s statistics, in all three formats, boast both quality and quantity, if seen as a whole.

A 129 and 75 in his first Test, 46 and 52 in the second and a naught followed by 77 in the third Test in New Zealand, against the likes of Shane Bond and Daniel Vettori, speaks volumes about the skill that Umar possessed in the early stages of his career. Unfortunately, he only played 16 Tests for his country. He was sacked for his desperation to score runs quickly than expected in Tests and admitted,

“I don’t think I should hold back my shots in Tests. If I do that, I’ll get confused and start declining.”

And so he did.

He only not held back in the longest format, the third of the three Akmal brothers made a swashbuckling appearance in the ODI format with 102 off just 72 balls with a strike rate of 141.66 in his third ODI against the Lankans.

Some will say, yeah well, what did he do after that? The answer is, out of the 111 ODIs he has played, Pakistan won 54 and in those, he averaged 42.39. Not bad for a person who bats at number five and six, eh?

And as far as the shortest format is concerned, T20, his average of 27.32 might not be great, but it is nearly equal to another specialist batsman Ahmed Shehzad (28.16). Meanwhile, in a total of 62 T20s played, Pakistan won 33 and he averaged a 33.70 in them, better than his normal average.

We can safely call him a match-winner for this, right?

Apart from his quantitative prowess with the bat, the quality of shots and his untainted ability to produce something out of nothing left his domestic coach, Mansoor Rana, awe-inspired, when he scored 855 runs in his maiden first-class season.

“One innings from Umar can change everything. He can demolish, he can win the game in ten overs,” said Rana back in 2008, who I guess was exaggerating Umar’s aptitude. Or let’s just say, for controversy theory’s sake, Rana was forced into praising Umar by the batsman’s father-in-law Abdul Qadir.

Moreover, Samiuddin did not start following Umar when he had become a regular in the Pakistan team. In 2009, just after his debut, the well-known writer had already hinted towards the greatness of one the Akmals.

“At the risk of being a product of this age, has there been a better, more rounded batsman to come through in Pakistan in the last decade? Mohammad Yousuf and Younus Khan, around the turn of the century, were the last batsmen Pakistan produced and both took time to settle in, and neither looked, initially, as settled, or as pure as does Akmal.”

This time even I am out of ideas for a controversy. Someone please suggest something regarding this. Oh wait! *the light bulb tings*, the author is quoting the same pundit again and again.

Who else has praised this still-very-young lad?

“As a batsman, he is technically complete, possessing the skill to play orthodox and unorthodox shots all around the wicket with equal flair and command.”

And no, this didn’t come from Samiuddin; instead, it came from another Karachi-based cricket pundit, Saad Shafqat.

So, the question that still looms in one’s mind is, why is Umar not able to convert his pure potential into something tangible, like centuries or double tons for that matter?

His plea to let him play towards the upper order, where he can settle in and translate 50s into centuries, has been heard on only six occasions – once at one-down and five times at the number four spot. His average at those positions (28 and 14) might not claim him to be a perfect upper middle-order batsman, but it is equally not enough evidence to declare him a failure at those positions.

Conclusively, a batsman who promised so much at the start of his career with great numbers and for someone who still shows stark glimpses of his great shot-play on occasions, the question remains, why has he not been given the treatment he deserves by Pakistan?

Is it the lack of the wow factor of ‘boom boom’ or is it because of his belonging to the Akmal clan?