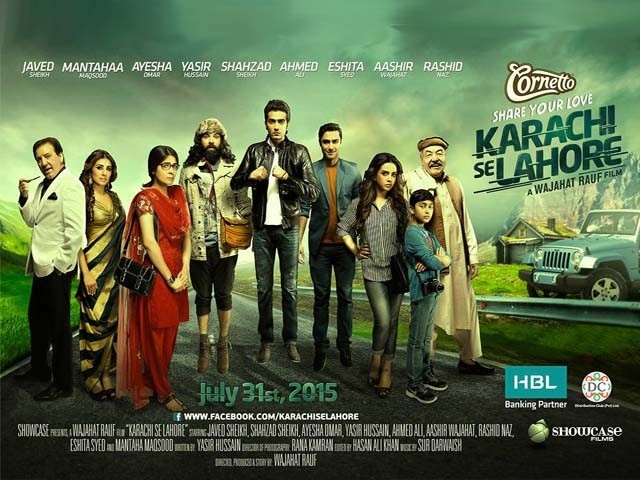 After Na Maloom Afraad, this movie stood out the most for me, as compared to all the recent releases. PHOTO: KARACHI SE LAHORE FACEBOOK PAGE

Karachi Se Lahore is another comedy flick from the back to back line-up in Pakistani cinema. It is directed and produced by Wajahat Rauf and the screenplay was written by Yasir Hussain.

The story kicks off with the introduction of Zaheem (Shahzad Sheikh) and Maryam (Ayesha Omar) who are neighbours constantly arguing and fighting on senseless issues.

Zaheem is seen living alone in an apartment (no mention of his family) and is a banker at Habib Bank Limited (HBL) (too much branding, as expected) who is clearly not happy with his current situation. Being the lead in the film, his acting on the big screen did not impress at all as he definitely missed the right notes.

On the other hand, Maryam is Tiwana’s (Javed Sheikh) daughter. She also has a younger brother named Zeezo (Aashir Wajahat), who is too cool to be a younger brother (I would definitely love to adopt him). No other details regarding Maryam’s character have been revealed, apart from the fact that she is single and always cranky. She is shown as a laidback, lazy, stubborn, tom-boyish girl who swears and watches cricket, as if girls on an average don’t do that. Also, if she really is a tom-boy, then what’s with the pink shalwar kameez? In my opinion, her role appropriately falls under the supporting cast category, rather than the female lead.

Eshita Syed plays the role of Aisha, Zaheem’s nagging and bad-tempered girlfriend, whose parents are nowhere to be seen in the movie, not even at her own wedding.

Hussain also plays the role of Moti, Zaheem’s stuttering friend who usually gives brilliant ideas, despite not being taken seriously most of the time. Also starring in the movie is Ahmed Ali, who plays the role of Zaheem’s friend, Sam, who is constantly trying to impress ladies with his not-so-charming personality.

The story begins when Aisha is sick and tired of waiting for Zaheem to make something out of his life and decides to take matters into her own hands. Hence she goes off to Lahore to marry her Canada-returned cousin, who by the way does a horrible job with the accent. With the help of Maryam, Zeezo and his two friends, Zaheem decides to go to Lahore to stop her from marrying her cousin and convince her to give him a second chance. The rest of the story revolves around their road trip from Karachi to Lahore and the hurdles faced on the way.

Yasir’s acting has been brilliant throughout the movie. None of his dialogues or punch-lines seemed unnecessary. There wasn’t a dull moment in his presence as he kept the viewers entertained and laughing. The entire cinema was applauding his jokes and one-liners throughout the movie. For me, he was the star of the show. If the movie manages to win an award that will solely be because of Yasir’s acting and dialogues as Moti.

The rest of the characters were pretty weak and failed to make an impression. You will know what I mean once you watch the movie. I would surely watch it five times again, only for Yasir’s acting.

The locations chosen for the movie were outstanding. However, I would have preferred some more of scenic views keeping in mind the movie is about a road trip from Karachi to Lahore.

You can’t help noticing the Cornetto and HBL branding, which can test one’s patience and make the person want to throw something at the screen. The brands must have spent a huge chunk of their marketing budget for sponsoring the movie, so stock up on some patience when going to watch it.

Ayesha’s item number, Tutti frutti, is a hit and has a catchy tune. It is our very own version of Baby Doll.  Aaja Re is another melodious track which was very much liked by the audience.

“Rabbi Ralli”, another item number featuring Mantahaa Maqsood, who plays the role of Mr Tiwana’s courtesan, is not to be missed if you love listening to up-beat desi numbers. Also try listening to Lahoriya a few times, and then tell me if you are not hooked to the beat.

Noori, Shiraz Uppal and Sur Darvesh have done a brilliant job with the music. I have already added a few songs to my playlist. It’s always a feast to finally listen to some nice music, especially when it’s a production of your very own industry.

Overall, the movie was a fun ride. Despite being a low budget production and an almost three-hour long movie, the movie did create some magic. After Na Maloom Afraad, this movie stood out the most for me, as compared to all the recent releases. Have to give that much credit to Wajahat and Yasir.

Two thumbs up to Yasir for his contribution towards a brilliant script and such fine acting, something I have seen after a long time. If you’re looking for a heavy dose of laughter, Karachi Se Lahore should do the trick. It’s a total paisa wasool (worth your money).

I would rate the movie:

Music: Four out of five

Eye candy: Three out of five

Direction: Four out of five

The author loves to read and write about lifestyle, fashion, and entertainment. Foodie by heart and a Marketer by profession. She tweets as @SadiyaAzhar and blogs at www.sadiyazhar.wordpress.com

Cooked with Bollywood masalas, ‘Wrong No.’ is definitely worth your money

Five reasons why you should (or should not) watch Bin Roye