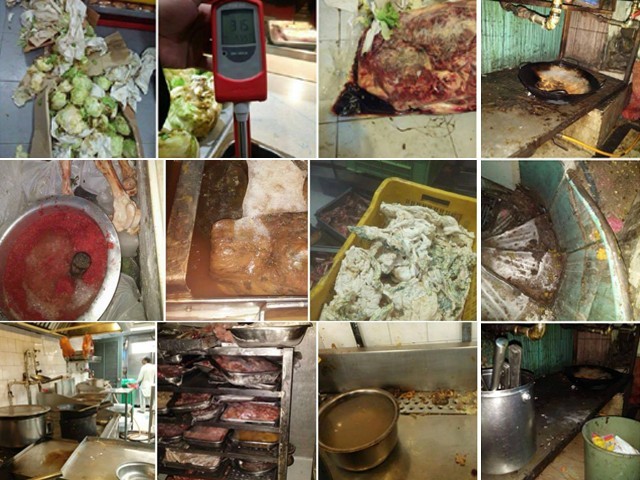 Examined: 5,500 is the approximate number of food outlets the PFA has inspected in the on-going campaign. PHOTO: PFA FACEBOOK PAGE

The Punjab Food Authority (PFA) Facebook page has become the new talk of the town as on an average, every second day they are providing updates accompanied with shocking images of restaurants, bakeries and food vendors being sealed or fined due to unhygienic conditions.

The PFA might have been set up in 2011 by Chief Minister Shahbaz Sharif to ensure that clean and hygienic food is made available for the people living in the province, but it really sprang into action since Ayesha Mumtaz has taken over its command a few months ago. Her actions have stirred up a debate about hygiene at food outlets mainly in the social media and it is about time that concrete actions are taken in this regard by the three main stakeholders involved: government, food outlets’ management, and customers.

According to the officials at the PFA, a total of 5,500 food outlets have been inspected in this short period, out of which 250 have been sealed and 2,500 have been given a notice to improve their hygiene standards.

Unfortunately, in line with Sharif’s governance style, the actions of the PFA to date have been Lahore centric and based on taking radical actions upon surprise visits (better captured by the Urdu word chappa) on these food outlets. Firstly, this initiative should spread to other parts of Punjab and also other provinces in the country, mainly Karachi and other parts of Sindh.

Secondly, Mumtaz and her team should make the process of getting licenses to operate these food outlets more stringent and follow-up inspections should be carried out at regular intervals to make sure that hygiene standards are met in a systematic way. The downside of the present chappa approach is that these eateries might easily go back to their old ways after paying off the fines. Once they reopen, they need to make sure that they also start training and initiate awareness programs, especially for small food vendors who might not be very well-versed with the hygiene standards they need to comply with.

In addition, at present, the Facebook page is causing severe harm to the reputation of different restaurants and bakeries in Lahore. Hence, down the road, the PFA should also start a campaign which acknowledges and even rewards the food outlets that have an acceptable hygiene standard.

Maintaining an acceptable hygiene standard requires a significant and continual financial investment by the management of food outlets. This is especially challenging for those outlets that have difficulty in staying afloat in the present business environment prevalent in the country. This is aptly highlighted by the plight of kitchens shown on the American reality television series, Kitchen Nightmares. They are mainly showing restaurants which are deep in debt or their business is not financially performing well.

On the other side of the spectrum, some food outlets stay away from investing sufficient financial resources in food hygiene simply because of the handsome profits they are making, thus they let the status quo prevail by not taking on additional costs. This is why it is not surprising those five-star hotels and restaurants managed by multinational companies are also being penalised by the PFA. The only way these food outlets can be forced to do so is if their profits are impacted. This brings into the equation the customers, who can act as a strong pressure group for these food outlets, to make investments that make sure that hygiene standards are met.

Customers are the sole source of revenue for food outlets, their threat of boycott or pressure to take actions on hygiene standards can be more productive than the measures being taken by the government. As a resident of Lahore, I was not surprised upon discovering the names of some food outlets that were penalised. Unfortunately, I had been eating from those restaurants despite knowing deep down that the food was unhygienic. The taste of food in such outlets makes most of us willing to take risks with our health and have often sadly paid the price for this gamble.

Hence, we need to make a decision – do we want to continue eating at these food outlets?

Customers are beginning to say no, an estimated 50 per cent decline in sales has been witnessed in food outlets that have been penalised by the PFA. The outcome of this decision will most likely guarantee the success of this hygiene campaign at the food outlets, and we the customers need to join hands with the government and ask the management to make hygiene a key priority. If this pattern continues in the long run, our support will also bolster Mumtaz and her team since they fear that they might lose steam in the long run, as it is difficult to stand up against a group of prominent restaurant owners.