The question remains, why was Yakub Memon hanged? 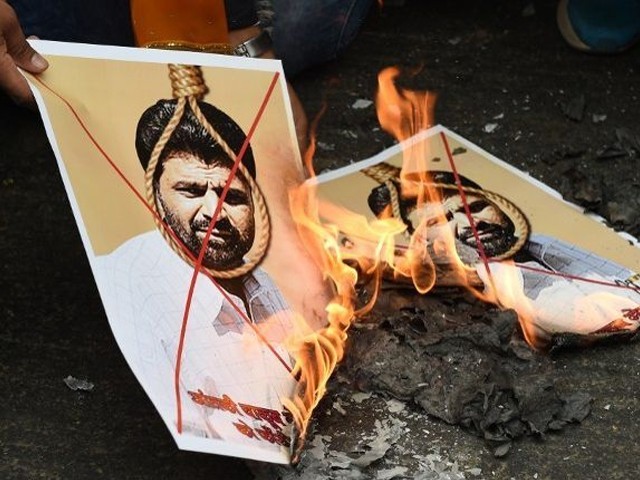 Activists of Indian right-wing Hindu organization Hindu Sena burn photographs of Yakub Memon, a key plotter of the Mumbai bomb attacks which killed hundreds of people in 1993, during a protest demanding capital punishment for him in New Delhi. PHOTO: AFP

The Supreme Court is an institution of the state. An independent Supreme Court does not mean that judges would not be cognisant of the political implications of their decisions. As the products of the society they live in, it would be unrealistic to expect the judges to make decisions devoid of any political, religious, or social influences.

Memon was pronounced guilty on September 12h, 2006 for his involvement in the 1993 Mumbai blasts by the Terrorist and Disruptive Activities (TADA) court. As the verdict was handed out to him, Memon proclaimed,

“Innocent people are being called terrorists.”

After any terrorist activity takes place, the lust for blood resonates amongst the population and the people want vengeance. Terrorism is the perfect antidote of democracy. It brings out the worst in us, and the worst is simply amplified when the majority is vying for blood.

Weak governments cave in to this pressure and channelise the hate of the masses towards the ‘others’. It was the Arabs for America after 9/11, Pakhtuns for Pakistan after the Army Public School (APS) tragedy and it was the Muslims for Mumbai after 1993.

However, the state does not deal with revenge and retribution. The state does not act out of vengeance. The vanguard of a state is justice, the state ensures justice. This is why I cringe anytime a politician or security official in Pakistan vows to take revenge after a tragedy. It simply perpetuates the circle of violence we are all caught up in.

Echoing this sentiment, Shashi Tharoor, two-time member of Parliament from Thiruvananthapuram, and the chairman of the Parliamentary Standing Committee on External Affairs in India, argues that the hanging of Memon turns the entire nation into murderers as well. Tharoor makes an impassioned plea against death penalty when he writes,

“Innocent, reformed and reformable people have been given the death penalty even though they no longer pose any serious danger to society.”

Whereas there was little criticism of the numerous hangings and extra-judicial killings of suspected terrorists after the APS tragedy in Pakistan, some salient voices have come out against the death penalty in India. Yesterday, the editorial in The Hindu on July 30th called it ‘inhuman and unconscionable’.

How much of the decision was influenced by Shiv Shena’s aggressive campaign to call for the hanging?  The emotions felt by the people during the Mumbai attacks were conveniently used to sway the public opinion against Memon.

Memon was in jail for 21 years, he was hardly a danger to the Indian society. Which brings us to the crucial question, why was Yakub Memon hanged?

The Supreme Court heard a mercy petition from Yakub at 3am, seemingly heralding itself as the vanguard of justice, but in the end, it all turned out to be a facade as the court caved in to the political pressure and rejected the mercy petition.

If we are to factor in the human element of the judgment and the political factors, it could be because he was Muslim. The outspoken Muslim politician Asaduddin Owaisi and Hurriyat Chairman Syed Ali Shah Geelani certainly seem to think so.

Even if we are to dismiss their statements on the basis of their political affiliations, the fact is that nobody has been hanged over the Babri Masjid riots. The recent editorial in The Nation on summarises it perfectly,

“The crux of the issue is this: while Indian authorities steam forward with this execution, cases of terrorist attacks against Muslim targets – such as Melagaon, Modassa, Samjhauta Express and Ajmer Sharif – all languish.”

The same Supreme Court has taken a much more lenient approach in dealing with Hindu extremists. For a Supreme Court to be truly independent, it has to factor in all of its political influences and offset them by being cognisant of their decisions. No judge can truly decide under a veil of ignorance but every effort should be made to do so.

Many of you reading this in Pakistan might find this blog post easy to agree with because of its criticism towards the Indian Supreme Court and pro-Muslim stance. However, I do recommend reading this again and switching India with Pakistan.

The principle remains the same, courts in Pakistan are reluctant to punish Muslim extremists and afraid to rule in favour of the accused in blasphemy cases. Many judges have been personally targeted for being lenient in blasphemy cases.

If our Supreme Court is also to be truly independent, the faith of the victim should not be an influential factor in the decision making process. It is about time the people of India and Pakistan move beyond the Hindu-Muslim differences and see terrorists as terrorists rather than Muslim terrorists or Hindu terrorists.