In Sindh, our children’s lives are not as valuable as that of a politician’s 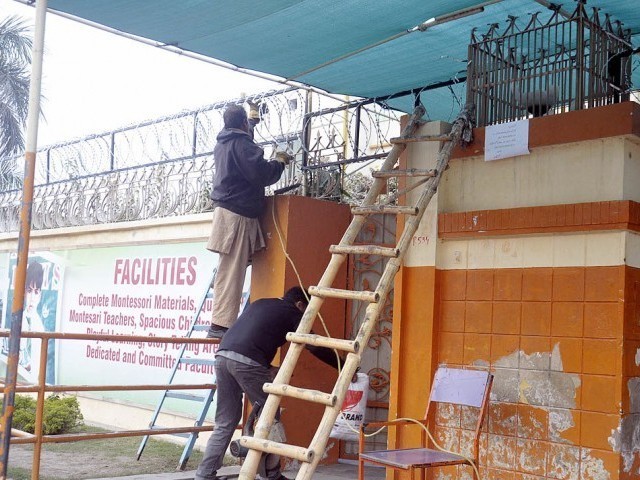 After the Army Public School (APS) Peshawar carnage, schools throughout the country were under constant threat. Most vulnerable were the schools of Karachi where there were a few instances of letters, coffins and even bullets thrown in schools in order to intimidate the authorities and school owners and create an environment of fear and paranoia.

However, the government did not mobilise its security apparatus to secure the schools and instead relied heavily on the schools to take care of their own security. Instead of withdrawing police from VIP protocols and deputing them in sensitive areas, the provincial government displayed insensitivity by asking the schools to beef up their security by employing the services of private security guards who are by no means a match to the ruthlessness and sophistication of the terror networks operating throughout the country.

The city of Karachi is witnessing an unregulated mushroom growth of settlements by individuals and families heading from Khyber-Pakhtunkhwa (K-P), Punjab and interior of Sindh to the port city in search of jobs. The government is least concerned regarding proper registration of all such immigrants which is resulting in massive infiltrations by hardened militants. Such elements are easily utilised by terror cells operating in the city and investigations revealed such a nexus after revelations were made by the terrorists who caused the Safoora Goth massacre.

Some background interviews with a few prominent school owners revealed that the only measure taken by the Government of Sindh was sharing of contact details of law enforcement agencies which even failed to connect in times of need. The helpline numbers shared by Sindh Rangers were unattended and once again, the owners of private schools were left helpless relying heavily on their underpaid and ill-equipped private security guards.

As per a recent news story in the Express Tribune, the provincial government spends Rs220 million monthly for the security of 600 VIPs, including ministers and foreign diplomats. It was also mentioned that over 1,675 police personnel were deployed in VIP zones, whereas only one security personnel was available for 6,000 citizens in the city whose estimated population was beyond 18 million.

The sitting government of the Pakistan People’s Party (PPP) has been in power for more than seven years now and from time to time, the chief minister of Sindh has expressed helplessness in maintaining law and order through the existing police structure citing an acute shortage of policemen in the province as a reason.

Yet there are no steps taken by the government in this connection and the only segment of the society that enjoys complete police protocol and protection are the VIPs and all of this remains at the cost of hard earned tax payer’s money. The life of a school going child is much precious than the life of the PPP co-chairman’s sister who enjoys fool-proof security just for being an influential figure in the politics of Sindh and a close relative of the head honcho. The entire cabinet of Syed Qaim Ali Shah, his battery of advisors and the bureaucrats serving in different departments of the Government of Sindh travel in complete security cover while the school going children stay unprotected and vulnerable to all sorts of terrorist attacks.

The Sindh High Court (SHC) recently took to task the provincial chief secretary of Sindh for ignoring the court’s order to identify those schools exposed to risks of terror attacks and adopt security measures there. This is indeed a ray of hope towards the resolution of a crucial issue that has been ignored by the government for long. The honourable judges of the SHC are the only authority who can get it done and if all else fails, it shall be the suo motu on part of the court that will eventually mobilise the security apparatus and protect the precious young lives before it gets too late.