He went from being her uncle to the father of her child, and no one saved her 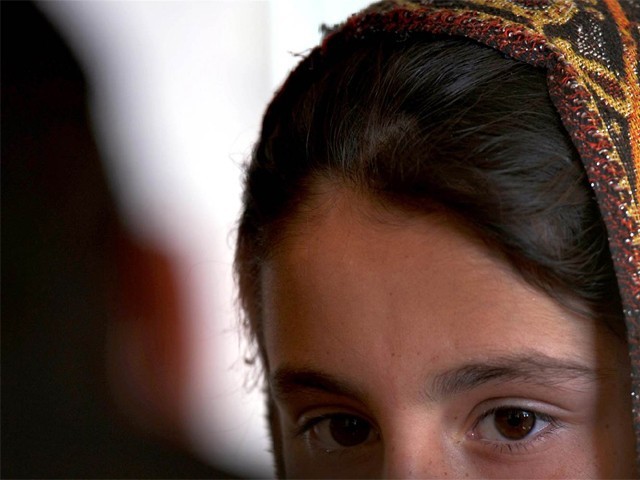 Pakistani girl Saneeda, who escaped a forced marriage, tells her story to a journalist in December 2013. PHOTO: AFP

Saima was 10-years-old when she was taken from her school located in a small town in Mitiari by her khaalu (maternal aunt’s husband). He told the teacher that Saima’s mother was very sick and she needed to be taken to her at the earliest.

“Ami (mother) must be very sick, maybe that’s why the doctor has kept her at the hospital.”

Days kept passing by, and she was getting used to living with her uncle. She even started liking it. After all, she did not have to do any work or did not have to go to school. She only had to play with her toys and be with her khaalu.

Time was flying by, as if it had to catch something very important.

Khaalu was the only family Saima was left with. As time flew by, the hope of seeing her parents slowly diminished. One day, her khaalu brought home a maulvi sahab and got married to Saima. She could not comprehend the meaning of marriage at such a tender age, but she was happy being a bride, because up until that day, she was only used to dressing her dolls as brides.

Now, Saima is an 11-year-old and is not the lively child she used to be. She does not like going out. She does not like playing with her khaalu, who is now her husband. She does not like talking to anyone about anything. The events that unfolded within a short span of a year had completely transformed her. Her life has changed as she is now expecting a child.

She is not even sure what is happening to her.

She doesn’t even know what it would feel like to have a child when she’s a child herself.

She feels weak, emotionally, and physically. It is too much for her little mind to absorb. But then again, isn’t it too much for anybody to absorb – a child having a child?

Saima is a victim of forced child marriage. Her betrothal to her khaalu was to settle a loan which her parents could not repay. Child marriages occur when one or both of the spouses are below the age of 18 years. While boys may also be victim to this issue, in Pakistan, girls are more vulnerable and impacted by this.

The primary causes of child marriages are due to a various reasons – traditional and customary practices, tribal and feudal structure of society, extremely weak legislation, lack of implementation of existing laws, and lack of awareness in the public about the harmful effects of child marriages.

Then there are exploitative practices like bride price – a monetary payment or quantity of goods given to the bride’s family by the groom. Swara marriages wherein girls are given to settle disputes, loans that the family cannot repay, to settle murders, abductions, adultery, and kidnapping committed by the men of the family. Watta Satta – bride exchange or the simultaneous marriage of a brother-sister pair (in some cases, it could involve a pair of cousins or an uncle-niece) from two households.

According to the Pakistan Demographic and Health Survey (2006-2007), almost one-third of young girls in the country are married before the age of 18 years. One out of 10 girls between the ages of 15 to 19 is already a mother or is pregnant. The statistics are still feared to be the same after eight years of the lapse.

Despite the physical damage to young girls, little progress has been made towards ending the practice of child marriage. Passing bills and making laws will not end such a practice, making sure those bills and laws are implemented without discrimination would, however, help. But in Pakistan, waiting for laws and bills to be implemented is like the people in Thar waiting for the year-long famine to end. When the government cannot even provide security to schools, considering the APS attack that shook the very foundation of this nation, how can we expect them to put an end to a ‘tradition’ that is plaguing our children and our beloved country.

*Names have been changed to protect the identity of the individual.

The author is pursuing her MBA. She is a philanthropist working with a local NGO and likes to learn about new people, new places, and new food. She tweets as @saba_hsh

5 classic national songs every patriotic Pakistani can relate to today