Southpaw: When revenge is a dish best served cold 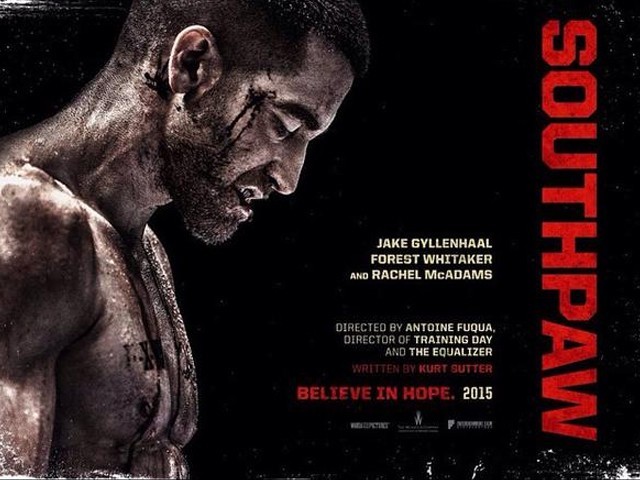 Southpaw is full value for every buck you pay. PHOTO:TWITTER (@YahooMoviesUK)

Hollywood cinema loves the spirit of sport. Countless works including 2005’s Coach Carter, 2011’s Moneyball and 2014’s American-football centric Draft Day, have focused on either the hardships of making a team work, or a young individuals ambition to seize the world.

But is the same cycle of repetition going to grip a highly demanding audience, time and time again? Hardly, and that is where Southpaw lands on the box office. This renewed work of passion and drama slickly breaks storyline clichés, giving ardent film lovers something to swoon over.

The plot of the film revolves around boxer Billy Hope (Jake Gyllenhaal), who lives a perfectly happy life with his wife Maureen (Rachel McAdams) and daughter Leila (Oona Laurence), in New York City. Billy’s ideal life is hit by a storm of adversity, losing his wife, finances and manager in the process.

In due time, a dim spark of light appears at the end of the tunnel, assuming the face of Tick Willis (Forest Whitaker), a veteran boxer. Tick, vehemently convinced by Billy to train him, agrees to Billy’s plead. As a result, the trainee slays opponents left, right and centre, making his way to the top spot, recovering the lost trust of his daughter too.

In brutal honesty, theatrical coverage of sporting realities can lose connection with the audience, but emotional substance guarantees a permanent effect. This is one of the key qualities of Southpaw. The film speaks outside a boxer’s frame of mind with the viewer, stressing on the subtleties of a struggling father-daughter relationship in the absence of a mother.

It also cleverly reminds the audience of a man’s helplessness once he is deprived of the basic resources. For the beginning half an hour of the film, a boxer’s transition from a newly celebrated champion to a needful soul in isolation, indicates simple and effective script writing. The in-depth direction makes sure that the circumstances depicted artfully toy with the viewer’s sentimentality, inducing more intrigue. Tell me, does another sport-drama film this year offer similar magnetism?

Keep thinking, and take your time.

What’s more is that, in all its emotional brilliance, the 123-minute long movie does not derail from the essence of boxing. Gyllenhaal’s expert acting enjoys extra vigour in the shoes of Billy Hope, who punches and hammers New York’s big names to get to his prime adversary, Miguel ‘Magic’ Escobar. Gyllenhaal also demonstrates sublime virility and ambition in a two-hour long ring of sweat and blood, as Billy seeks vengeance for his wife’s murder.

Whitaker, with his throaty voice and physical gallantry, can be seen bestowing his very best upon the film, along with McAdams, who personifies the role of a faithful, loving wife in full swing. How is so much potential possible in a film? Stupefying.

Another aspect which one cannot afford to lose out on is the soundtrack. What is a film without a solidly lined soundtrack, right? Worry not, Eminem has it all under control. The rap giant filled the movie’s audio void with the powerfully addicting Phenomenal and Kings Never Die.

If not already star-studded, Southpaw also flaunts an array of noteworthy musicians in assisting roles, including 50 Cent as Jordan Mains and British songstress Rita Ora as Maria Escobar. The film, competing with Paper Towns and Pixels this week, grossed $16.7 million in just four days, returning notable dividends off a reasonable $25 million production budget.

It is a passionately produced tale of aggression and aim, leaving out glamour to portray crude reality as closely as possible. All in all, Southpaw is full value for every buck you pay. Moving from your seats is the last thing your heart would desire.