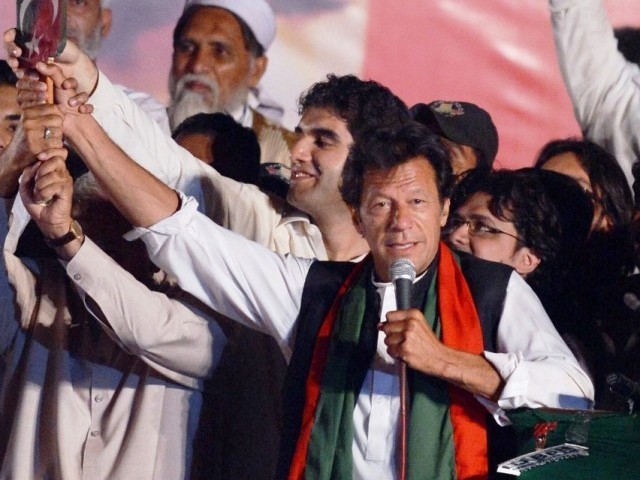 PTI leadership has fulfilled its responsibility to its voters who genuinely believed they suffered due to a fraudulent election. PHOTO: AFP

The verdict is out and it has shocked leaders, members and supporters of Pakistan Tehreek-e-Insaaf (PTI).

Yes, we are talking about the Judicial Commission (JC) report on the alleged rigging in the 2013 General Elections. While Pakistan Muslim League-Nawaz’s (PML-N) celebrations add to PTI’s wounds, anyone who thinks that the verdict is an irreparable blow to PTI may need to think again.

Believing in ‘every cloud has a silver lining’, here are my two cents why JC’s verdict may be one of the best things for PTI.

Had Nawaz Sharif resigned due to the sit-ins or after the findings of the JC validating rigging claims, he could have found excuses to hide his incompetence. PML-N’s performance is no better than Pakistan People’s Party (PPP) and it provides a great opportunity for PTI as there’s no victim card left for PML-N to play.

2. Coming clean out of allegations

When Javed Hashmi defected from PTI, he made shocking revelations about PTI having establishment’s backing and went on to claim that the judiciary was in connivance with PTI to oust Nawaz. One wonders if that was all true, why that hasn’t happened yet. Today, PTI comes clean out of all such allegations.

Most of the PTI voters were first time voters in last elections. When they felt they were cheated, they looked up to Imran Khan to secure their right. PTI leadership has fulfilled its responsibility to its voters who genuinely believed they suffered due to a fraudulent election. PTI’s leadership can proudly say that they tried their level best.

Those who saw rigging themselves have found another reason to believe in Imran. JC has not only declared elections in Punjab as fair, but also the same for parts of Sindh and Balochistan. The anti-status quo mind-set still rallies behind Imran.

5. Better bargain for next caretaker setup

PTI is the second largest party in Punjab and a key stakeholder in the National Assembly as well. Owing to the 20th amendment, an opposition leader has a huge say in the finalisation of the caretaker setup. With PTI’s Mehmoodur Rasheed as the opposition leader, PTI can bargain to bring a neutral setup to avoid the repercussions of previous election.

PTI may have lost its case in JC, but it doesn’t necessarily mean it has ceased to believe its rights were deprived. PTI and its supporters must be proud of the political awareness that has spread in the masses. How many people knew what a Form XIV or XV was before the rise of PTI. Similarly, masses have begun to debate on budget allocation for health, education, law and order and infrastructure development. All this is strengthening Pakistan’s democracy and will eventually attract voters towards PTI.

The 350 micro hydel dam projects, the Billion Tree Tsunami, the Tameer-e-School, the de-politicisation of police and health reforms projects can now have Imran’s complete attention. K-P has re-voted for PTI in the local body elections, which speaks of their performance, and Imran’s enhanced focus will impress K-P in 2018 too.

PTI has been a forerunner in demanding electoral reforms. Furthermore, it has been the demanding voting rights for overseas Pakistanis. PTI must utilise the parliament for reforms and overseas Pakistanis’ suffrage. JC’s report extensively states the poor planning and negligence of Election Commission of Pakistan (ECP) and, PTI can bring up this report in the parliament as a precursor for revamping ECP.

Imran has already started re-organising the party; we see new decision makers have been brought on-board in all provinces.  With the next elections at least three years away, PTI’s attention should be on overcoming all its weaknesses, then it will comfortably be in a position to form its own government.

Success is not final, failure is not fatal; it is the courage to continue that counts.

PTI might not be able to convince the JC of systematic rigging but its petitions of the four infamous constituencies in the Election Tribunal is still strong. It already stands vindicated in NA125. It may be a long legal battle but Imran is not ready to give it up.

The verdict may have hurt the PTI politically, but it’s certainly not all over for them. We have seen the highs and the lows of every political party and PTI will overcome this hurdle as well. Elections 2018 will be a contest of good performance and governance between PTI and PML-N, and the prototype of Naya Pakistan in K-P will be evident by then.

The author is an MBA student from IBA, he is an engineer working for a telecom firm. His interests include politics, economics and technology. He tweets as @faisalahmadj