When businesses flourish at the expense of poor hygiene standards 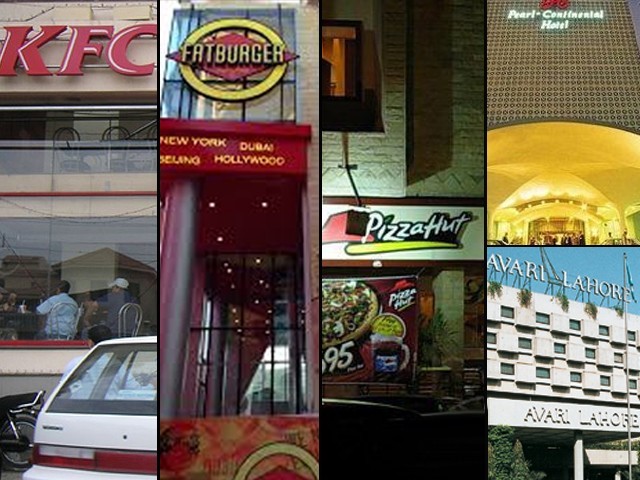 The recent raids on Pizza Hut and KFC in Peshawar and Fat burger, Pearl Continental (PC) and Avari in Lahore and the following corrective action taken by the government officials is indeed a welcome sign and deserves appreciation.

Cleanliness and hygiene are probably the least important segments to be taken seriously in our society. Be it our government-run offices, hospitals, parks and privately-owned eateries, grocery stores, and entertainment areas.

Due to a lack of awareness and absence of strict law enforcement, businesses are least bothered and easily get away by either bribing the food inspectors or paying off the little monetary penalties that the government impose on them whenever a certain concerned government official decides to do his/her job for a change.

The recent raids on Pizza Hut and KFC in Peshawar and Fat burger, Pearl Continental (PC) and Avari in Lahore and the following corrective action taken by the government officials is indeed a welcome sign and deserves appreciation. For once, it seems like some individuals have decided to take to task the people responsible for carrying out unhygienic and unsafe practices which is a criminal offence by all means.

Similar raids and stricter actions are required in the city of Karachi as well where there is a mushroom growth of eateries but zero enforcement of hygiene standards. In Sindh, the only sector that has been seen active in this respect is the electronic media which has played its role positively by carrying out surprise raids along with health officials and the concerned area administrators. This is where the discipline of food safety and a proper knowledge of the subject come in.

Food safety is a scientific discipline describing handling, preparation, and storage of food in ways that prevent foodborne illness. This involves a set protocol that should be followed to avoid potentially severe health hazards. This also includes a system of checks and balances to ensure safety between the industry and the market and then between the market and the end consumer.

When it comes to ‘industry to market’ practices, food safety concerns include the origins of food including the practices relating to food labelling, food hygiene, food additives and pesticide residues, as well as the concerned policies on biotechnology and food and guidelines for the management of governmental import and export inspection and certification systems for foods. When considering ‘market to end consumer’ practices, the rule of thumb is that the food needs to be safe in the market during the storage phase and the safe delivery and preparation of the food for the end consumer.

Food can transmit disease from person to person as well as serve as a growth medium for bacteria that can cause food poisoning. In Pakistan, we quite frequently hear of people suffering from food poisoning after eating at some restaurant. The reasons are quite evident, unsafe and unhygienic storage of food or negligence shown during the preparation.

In developed countries, there are sophisticated standards for food preparation, whereas in lesser developed countries like that of ours, the main issue is simply the availability of adequate safe water, which is usually a critical item. In a city like Karachi, where because of criminal negligence shown by the government of Sindh and corruption within the Karachi Water and Sewerage Department, the water tanker mafia rules supreme and provides unhygienic water to homes and businesses 365 days a year. This water is then used by hapless end consumers in the preparation of food resulting in the rising cases of food poisoning and contamination.

The five key principles of food hygiene, according to the World Health Organisation are:

2. Separate raw and cooked foods to prevent contaminating the cooked ones.

4. Store food at the proper temperature.

5. Use safe water and raw materials.

When it comes to enforcement of food and hygiene safety, up until now, almost all the provincial governments have shown criminal negligence with an exception of a few cases of enforcement that were in the media recently. Otherwise, the poor standard of cleanliness witnessed at government offices is a clear reflection of the state of mind the concerned officers come with.

The government will have to work on this crucial issue of food safety and hygiene on war footings and ensure the continuation of law enforcement in this respect with frequent surprise checks and implementation of the strictest penalties for a safe and healthy future for our nation. Sincere efforts are also required to provide the citizens with clean and consumable water, which is the basic necessity of every human.