Raping a 14-year-old and then refusing abortion, well done, India 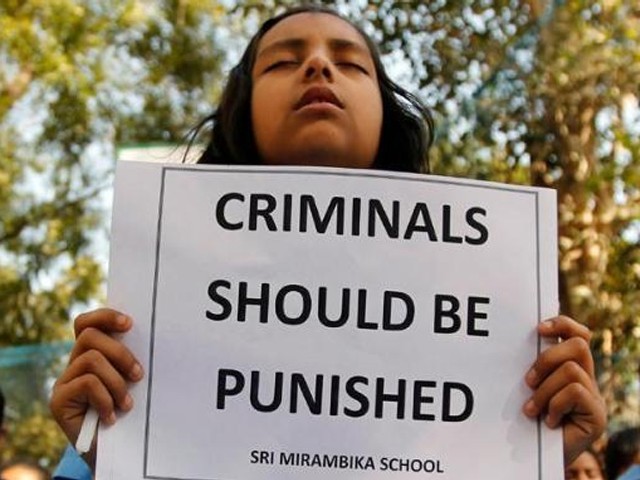 Schoolgirls pray to pay homage to a rape victim who was assaulted in New Delhi, at a school in the western Indian city of Ahmedabad. PHOTO: REUTERS

Every 20 minutes, a woman in India is raped. India has the third highest instance of rape in the world (the first is United States). While this seems to be a scary statistic, there’s something even more poignant that can be taken from these numbers – people are reporting rape.

The countries that fall under the top ranks of rapes ‘reported’ are developed countries such as Sweden, Belgium and Canada. A lot of countries are missing, not because rape does not occur there, but because rapes go unreported in those countries. It must be noted and clarified repeatedly that human rights and women protection laws are missing in the countries where rape statistics are unavailable.

Another important development that India is witnessing regarding sexual protection and sexual rights is the morning after pill. It is a critical step in tackling rape. Just recently, an Indian court refused abortion for a teenage girl who is five months pregnant. The 14-year-old girl was raped by her doctor, who is currently in police custody. The teenager, hailing from Gujarat, hails from a poor family and does not have the resources to take care of a child.

The problem with these cases is easily the social and legal framework which does not support or protect or have any measures to rehabilitate rape victims and the resultant circumstances they have to face in a patriarchal society. Ranging from stigma to the possibility and eventual pregnancy, rape victims fail to live a normal life like any other person around us. They carry many invisible scars and by no fault of their own, they become victims of their own lives.

What is imperative for countries is that they establish formal centres, raise public awareness regarding sexual health and introduce a system that helps women hailing from low income strata to not be perpetually thrown into the deepest rungs of failures.

If a woman is raped, she must have the confidence in the legal system that will protect her and will not further harass her.

She must have the knowledge and awareness of immediately finding contraceptive measures to prevent a rape pregnancy and she must not, and I reiterate must not, be judged at any cost. Raising offspring is a beautiful, wonderful experience and a serious and lifelong responsibility. For a rape victim to have to bear the burden of a child with no resources is, simply put, a disaster.