Why Slackistan and Harry Potter are not in the cinemas 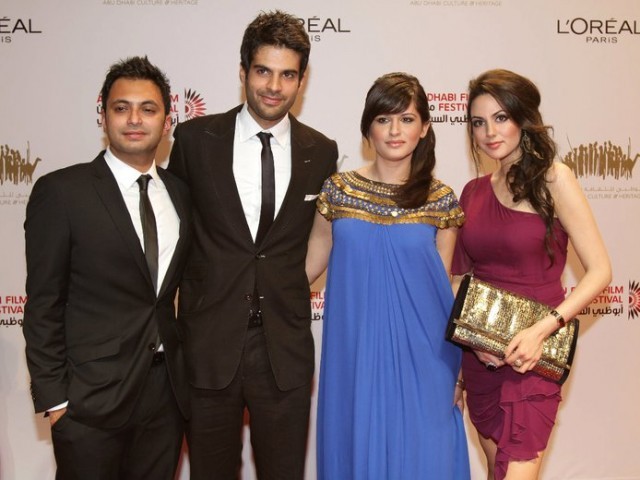 The stars of Slackistan are unlikely to grace Pakistan's big screens anytime soon.

I remember watching Dostana in the DHA cinema. I was probably the only person in the audience  grimacing more often than laughing. There were couples, groups of friends, entire families and aunties with kids in tow. A few seats away there was even a three-year-old.

I don’t hate all Bollywood movies. I usually enjoy whatever Amir Khan is in (except Ghajini). I liked Namastay London, Jab We Met, Umrao Jan (the one with Rekha) and Devdas.

Yet, I hated Dostana. Aside from the song “Desi Girl”, it did not have one redeeming quality. It represents the reason I shy away from watching Bollywood movies; the campy cheesy humour, the tacky and tawdry jokes, just the general lameness of it all. It was a three hour long gay joke which was cheap and derivative, trying to emulate the humour from TV shows like Will and Grace, Friends and Sex and the City yet failing miserably.

Here’s the part I don’t understand (aside from the fact that most of the audience was laughing) no one objected their children witnessing this reel atrocity. Pemra apparently found no problem with it either. The people who buy the distributing rights to such films find no problem with them and yet the films they do find problems with are the ones I might actually enjoy!

This is not a call for banning Indian movies or any other movie just for being lame. I understand the concept of supply and demand. But how does that explain why Harry Potter isn’t being released in Pakistan on November 15, alongside the rest of the world?

A statement on the cinema’s website citing reasons for not showing the previous film in the series, The Half Blood Prince, reads: “Please be advised that DHA Cinema does not import films. We can only exhibit what has been imported by any Distributor/Importer.”

What are distributors thinking?

It’s one of the most highly grossing movie franchises in history, but the release of the latest installment is still unconfirmed according to DHA cinema’s website just a few days before it’s set to open in cinemas worldwide. What makes this so devastating is the fact that Harry Potter is coming to an end. Fans will feel the euphoria of seeing it in cinemas at the same time as everyone else across the world. For this generation, it’s been said to be a historical event akin to Star Wars. For everyone else, it’s simply good entertainment. Pure cinematic joy.

Another reason fans are missing out is because Harry Potter has special effects which are perfect for the big screen. The experience of watching a movie like Transformers, The Lord of The Rings, Avatar, and Harry Potter is something that can’t be recreated at home. It’s just not the same.

Slackistan seems to be suffering from the same ill fate. Speaking to The Express Tribune director Hammad Khan said:

“I am trying to secure distribution partners in Pakistan…It’s ironic that the film is invited to screen around the world and nobody has made an offer in Pakistan. What makes it worse is that fans of the movie, the people who should be seeing it think that we’re choosing not to release it in Pakistan and prefer to screen it in other countries. I tell them, they chose us, we didn’t choose them.”

Every run of the mill Indian movie is being screened in Pakistan, but Slackistan, one of the few original homegrown films to be produced is being cast aside. Whether it will live up to it’s hype is another story, but it should at least be given a chance. If Pemra chooses to ban the film for depicting scenes of young adults partying in Islamabad, it would be a ridiculous and hypocritical move considering they didn’t censor any of the raunchy scenes in the last Fast and the Furious flick.

It would be a travesty if cinemas fail to show Harry Potter after showing Twilight (more aptly pronounced “toilet” by others. Just depends on one’s point of view and/or accent). They can show us Twilight, but not Harry Potter? Dostana, but not Slackistan? The question is, who are these distributors and why do they have such bad taste?