Zardari’s fool proof plan to end corruption (read: save himself) in Sindh 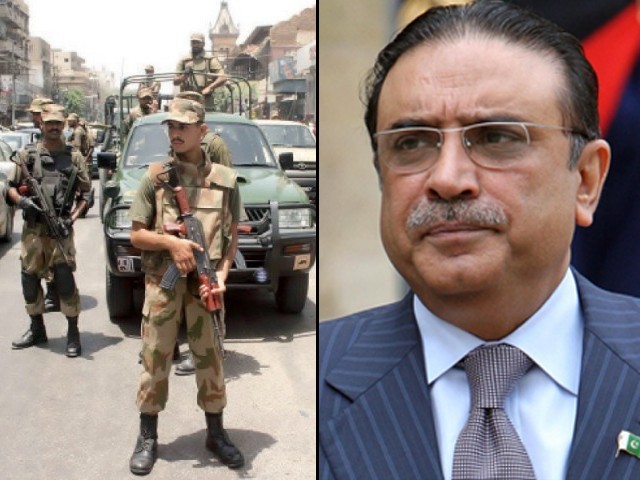 Mr Zardari is wise, or at least wiser than most in his league, he knows he is not fooling anyone into withdrawing from their stance against PPP and Sindh government's corruption.

Recently, the Chief Minister of Sindh, Qaim Ali Shah, along with some of his cabinet members travelled all the way to Dubai to attend a meeting co-chaired by the co-chairman and chairman of Pakistan People’s Party (PPP), neither of whom, by the way, hold any office of authority in the government of Sindh or Pakistan, yet are ‘powerful’ enough to have the Sindh government come to them for directions.

What were these directions that could only be given in Dubai, only in person and not via a teleconference, letter or a phone call?

Well, first off, it is an established fact that Mr Asif Ali Zardari alone is heavier than all (aik Zardari sab pe bhari), so maybe it was cheaper and more convenient for the Sindh cabinet and CM to go to him, than he, the ‘heavy one’ coming to Sindh.

Also it was during Eid and, God forbid, if these ‘popular’ leaders were forced to spend Eid amongst the people they ‘love so dearly’. So it makes sense to have a dozen people travel to Dubai instead of two travelling to Sindh to decide Sindh affairs. Any criticism on this particular aspect of the meeting is thus unjustified.

As for the agenda of this meeting, recent actions by law enforcement agencies, Rangers to be precise, in Karachi have become a cause of concern for all stakeholders. The higher your stakes in Karachi, more the concern. Ever since the Rangers have hinted upon widening the scope of their operation to ‘economic terrorism’ and that even to parties other than Muttahida Qaumi Movement (MQM), PPP has been a little edgy.

When Rangers started arresting government officers who were likely to spill the beans, PPP became defensive, then suddenly offensive and then again defensive. The bhari Zardari’s bhari outburst just before leaving the country, revealed how Rangers had touched a bhari nerve.

MQM was already a target and now PPP was a promised next. Corrupt elements within the PPP could have been exposed, tarnishing the party, its leaders, its leaders’ siblings, and their ‘adopted’ brothers. So when some powerful ‘others’ had taken notice of mammoth corruption in Sindh, the ruling party also decided that it is time to take notice of their own.

PPP decided to start taking measures against the flourishing culture of corruption in Sindh, or at least look like taking these measures. Anti-corruption and inspection teams were directed to become visible, government officials were asked to act like they were doing all they can against corrupt subordinates. Rumours were leaked of axing some ‘corrupt’ ministers from Shah ji’s cabinet.

This meeting was called to decide the fate of these ministers and their departments on the basis of ‘performance’. Basically, it was decided to make some changes and not change anything. No minister was axed, only departments were exchanged.

The portfolio of Ministry of Information has been taken from Mr Sharjeel Memon and given to Nisar Khuhro, whose portfolio of Education and literacy department has been given to Mr Mir Hazaar Khan Bijrani whose portfolio for Works and Services has been given to Sharjeel Memon. So if Memon had failed to manage the affairs of information and local governments department owing to corruption or incompetence, he will now be given an opportunity to fail at running Works and Services department.

Similar changes have also been made in Sindh’s bureaucracy. The Sindh government also recently decided to take action against corrupt government officials, and give more authority to the anti-corruption establishment. The object of all these measures seems to create the perception of fighting the menace of corruption, instead of taking any real steps in that direction.

Mr Zardari is wise, or at least wiser than most in his league, he knows he is not fooling anyone into withdrawing from their stance against PPP and Sindh government’s corruption, or from their plans to act against it. But he also knows that he only needs to fool the masses into believing that PPP is sincerely working to eradicate corruption and clean Karachi. If and when actual steps are taken by Rangers or any other, PPP can play their ever green, ever effective ‘victim’ card.