Why the floods in Chitral are not a natural calamity 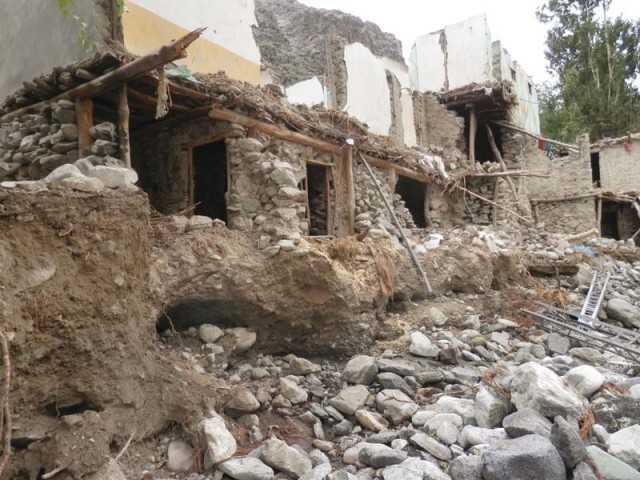 Last week marked the most devastating surge of floods in Chitral in over a decade. The destruction has been, according to the word of mouth, “everywhere and colossal”. Infrastructure has been grounded, a number of roads have almost disappeared, electricity has been out for days, and for days to come, clean drinking water will be a scarce commodity.

People living along the river bank have lost their homes and land, and economic activities in majority of the areas have been hampered. As many as 60,000 people have been displaced in 26 flood-hit villages.

While we have heard stories of unbelievably huge floods from our parents and grandparents, hardly did we believe in what they said. The latest floods, however, refreshed the memories of the elderly and jolted us to reality. This suddenly made us start believing that such instances can occur.

What led to such floods?

Back in my grandparents’ days, villages in Chitral were connected by dangerous and less-travelled roads. One would have to walk over steep mountains, sometimes leaning over the fierce Chitral River, to reach the next village. Shops were almost non-existent, let alone markets. Trade meant carrying ghee (oil), salt and tea on the back of a donkey and travelling for days over mountain terrains, village to village, to sell the products. People lived on subsistence agriculture and livestock which were grazed as herds.

Goats have historically been grazed in communally owned pastures throughout the year, whereas other livestock is seasonally grazed in pastures. During winter, herds are grazed in nearby hills, whereas during summer, they are kept in the mountains for around four to five months. People would take turns to spend nights in the mountains to look after the herds. While on duty, the caretakers of the herds would stay up all night, setting huge trees on fire to scare off predators.

People in the villages were also dependent on the trees in the mountains for fuel and timber. The burning and cutting down of the trees led to large scale deforestation in the past decades. Since the pastures were owned communally, no one bothered re-planting any tree and the forests faced the tragedy of being wiped out.

In recent years, communities had switched to Charwahas (herders) — a family employed for grazing all the goats. Charwahas also sneaked in their own herds in the mountains, which further put more pressure on the already diminishing trees. This may have contributed to flooding in two ways.

Firstly, the loss of trees means increased exposure of soil to sunlight, water and wind erosion. Water erosion on the slopes like those of Chitral is a definite source of flooding. Secondly, due to deforestation, there are very few roots left to hold the soil on the hills together. With weakly held soil, the lightest of rain or wind can trigger erosion, and thus flood the land. While the forests in the hills and mountains have disappeared, grazing still continues. Continued grazing over the now-bare hills may have also contributed to the recent surge in floods.

A cut and burnt tree atop a mountain in Reshun, Chitral.
Photo: Yaqoob Ali

Apart from these apparent reasons, there are a few less apparent and less thought-about reasons behind the floods, such as the increase in global temperatures, the changing pattern and amount of rainfalls and glacier outbursts.

It is integral for us to look into the floods and find out about this catastrophe. Without systematic understanding, we will fail to devise the right policies to deal with floods. Policies without proper research do more harm than good. Should you talk with anyone in the village of Reshun, the only thing they blame for the floods is goats.

Interestingly, the local authorities have now driven off all the herders and are even considering imposing a restriction of three goats per family. It is worth noting that livestock is still a major source of insurance and consumption smoothing for a large number of people in Chitral. I am surprised how the authorities have reached this decision without having determined if goats actually cause floods or not.

What the government can, and should, rightfully do

On his visit to Chitral on July 22nd, the premiere announced an aid of Rs500 million for the rehabilitation of families affected by the floods as well as the infrastructure. He also announced funds to build a motorway for Chitral. This is one of the typical reactive announcements which we are used to hearing after any natural calamity or incident.

The government needs to think deeply and cautiously. Right now, the affected families need quick relief. Heavy machinery is needed to stop the floods — which are still on-going in some places — to avoid further destruction of homes, agricultural lands and infrastructure. Building materials are needed to rebuild the destroyed houses.

And to do the above two, the villages need to be reconnected via roads. The government should direct its engineers to the affected areas so that roads can be rebuilt, at least temporarily. By doing so, they can make sure that material aid reaches the affected on time.

It is also worth noting that floods are not a one-time incident. They may continue hitting the areas in the coming years. If so, taking a reactive approach means a huge stream of spending from the government in the future. In a place like Chitral, which has a huge river and plenty of tributaries and valleys, a reactive approach is, no doubt, costly, ineffective, and inefficient. The government needs to take a preventive approach and to look into possible ways to prevent such large-scale floods in the future.

Preserving the remaining meagre trees and accelerating plantation on the hills and mountains is surely a great solution. The government should also invest in research in order to figure out the factors that contribute to such flooding.

It is only through research that we can find a permanent and inexpensive solution to deal with floods. Distributing aid among the affected is only temporary and perpetual.

The author hails from Chitral and is studying Economics at LUMS. He is passionate about climate change and its impact on agricultural economies. He plays tennis and likes photography. He tweets as @alipahari