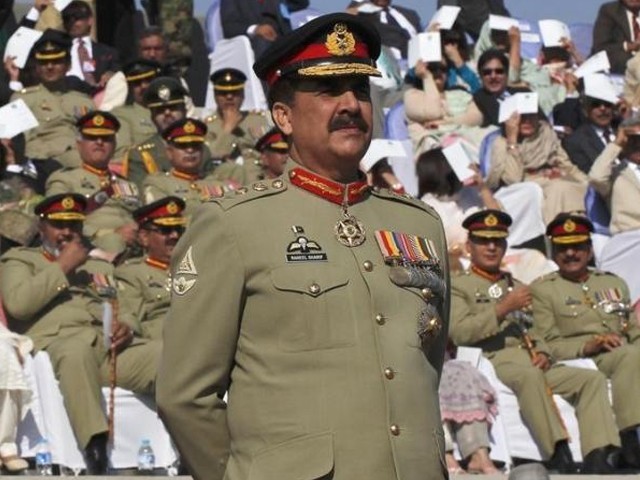 These men in khakis continuously play their role in the strengthening of the country both overtly and covertly. PHOTO: REUTERS

Be it the terror attack on the Army Public School in Peshawar, Eid celebrations in the middle of war zones or right behind enemy lines, some of our brave generals have never let us down. First it was General Pervez Musharraf, and now it’s General Raheel Sharif. Both these men of honour and valour have set examples for the entire country to be proud of.

Pakistan Army has always been there when needed or whenever the country was left abandoned in a quagmire of turmoil by our corrupt and inefficient politicians. These men in khakis continuously play their role in the strengthening of the country, both overtly and covertly. While our main stream leaders prefer to spend their Eid time abroad in the Kingdom of Saudia Arabia, or with the opulent Sheikhs of Dubai, it’s our Army Chief, General Raheel Sharif who chose to spend his Eid with the troops in Waziristan and the families of the APS massacre victims. Such is his resolve and appreciation.

How conveniently did our ‘democratically elected’ politicians forget about the tragedy that struck our young kids and left their families devastated?

It was the Army that took the initiative back then and it’s the same Army that has taken up the responsibility to cleanse our homeland from all kinds of local and foreign terrorists and their masterminds.

General Sharif has redefined military statesmanship by ensuring concrete steps towards a safer Pakistan, while digging in further to search and expose the hidden hands behind all kinds of criminal activities taking place in the country. He was all praises for the brave security guard Talib Hussain of Quetta, who sacrificed his own life while saving the lives of several others by averting a suicide blast attempt in Quetta on Chaand Raat. Even an acknowledgement and a few words of praises by a serving Army chief means a lot to individuals and groups who have never hesitated for a single second when it came to defending the sanctity of Pakistan. Such actions clearly draw a line between the elites and the patriots and this is how our soldiers earn the trust of their fellow countrymen.

Pakistan Army’s role has always been a positive one. Be it a natural catastrophe, maintenance of law and order or holding of fair and free elections, the civilian administrators reach out to this epitome of discipline and courage which has never hesitated in coming to the rescue. The trust that the entire world has in the abilities of our armed forces is evident from the fact that whenever a man in uniform has held the reigns of this country, foreign direct investments shot up and showed a positive trend.

It’s the trust that the international community has in the strong institution of Pakistan Army. The on-going operation in the crime-infested city of Karachi is yet another example of how the Army can get things done systematically and without succumbing to any political influence. We have a winning combination in the face of General Sharif, DG ISI Lieutenant General Rizwan Akhtar, Corps Commander Karachi Lieutenant General Naveed Mukhtar and DG Rangers Major General Bilal Akbar.

Together, these four have brought normalcy to a city which used to be in the news for its lawlessness. Despite of some reservations shown by the political stakeholders of this city, the Army is committed towards going after terrorists and their handlers. If this Army Chief succeeds in bringing the corrupt to task and eradicates terrorism countrywide, he will leave behind a legacy for generations to be proud of.

This institution has always provided one of the finest men to this country who served their motherland well and brought laurels to Pakistan with their valour and patriotism.