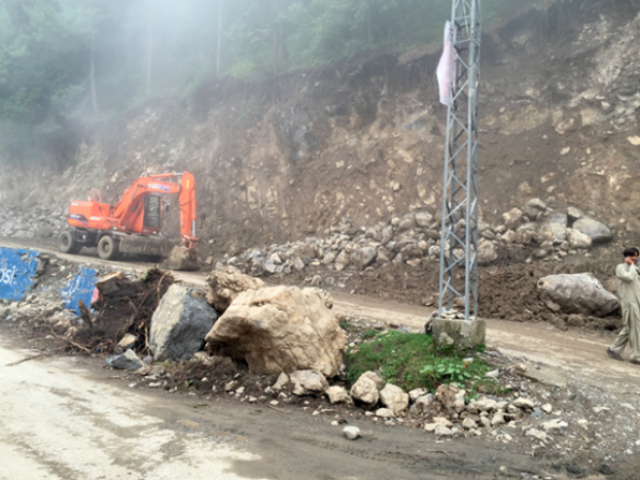 Landslides, destruction and chaos on the roads leading into Nathiagali. PHOTO: AAMINAH QADIR

I spent my childhood playing in daisy-filled meadows, walking the pakdandis and exploring the narrow roads of Nathiagali. I have drifted along these pakdandis for miles, getting lost in the green hills only to be brought home by the villagers who witnessed us growing up. My family and I are blessed that we can flee to the Galiyats, escaping the hustle bustle and frenzy that has seeped into almost every other city in Pakistan.

The hill station has been my parents and grandparents retreat of choice since the 60s. This year brings the fourth generation of our family to the Galiyats at a tender age of just nine months. Over these decades, Nathiagali has become our home and the people residing in the villages surrounding it have become our extended family. The residents of Nathiagali have taken over the preservation of its unique charm personally by planting over 150,000 trees. They also started a local ambulance service and have uplifted the educational standards of schools. And hence, predictably, any destruction of my home evokes strong emotions in me.

What has set Nathiagali apart from other hill stations is how it remains in its natural state — untouched. The occasional VIP movement shakes the peace — whether they are passing through to go to the governor’s or chief minister’s house — but they all pass, leaving behind the quaint town with its residents and its narrow roads. The hill station has been conserved, because unlike Murree and other once-beautiful hill stations, its care has been left to the people who live within it. That is until the Pakistan Tehreek-e-Insaaf’s (PTI) government came into power in Khyber-Pakhtunkhwa (K-P) with its lofty plans to expand roads and tourism.

Let me clarify — I am a proponent of increasing tourism, as are the shopkeepers and locals I have consulted. The K-P government’s plan to open guesthouses to the public is promising; this will provide tourism spaces that once belonged solely to government and army personnel. I am hopeful the plan will be mindful about the importance of proper maintenance of facilities and historic spaces.

However, their intention to make these free or cheap for the public is misguided. Heritage sites such as the ones they have now opened up to the public are preserved by charging top-dollar worldwide. Furthermore, the previously government-run chalets called the “Sarhad Tourism Chalets” are run-down and dilapidated, due to a lack of adequate maintenance.

None of the locals are willing to stand by and watch the destruction and defacing of their hometown; one of the rare few places free from the clutches of our short-sighted and ill-planned leadership. Shopkeepers say that they find no logical reason to expand the roads of the bazaar (market) — the project the government has embarked on — as tourism is peaking, even before such expansion. They complain construction was at a standstill the entire year and only resumed in the last six weeks of summer, during peak tourist season, with no management present which is clearly hampering this tourist season currently underway.

Consequently, the bazaar is ridden with slush, landslides and overflowing water, and age-old trees are being cut at random. Many in the marketplace are disillusioned; they say the new government has destroyed Nathiagali beyond repair, that it can never be restored to its original state. Shopkeepers complain their business has seen a decline since the beginning of the project and worry things won’t pick up if the area’s sanctity isn’t safeguarded.

Ultimately, the government fails to recognise the problem is of management, that wider roads will not alleviate traffic problems as there are no policemen or government officials supervising the streets or the construction work. It is heart breaking to witness the PTI government ruin the character of a beautiful hill station — a hefty price to pay for wide roads. After all, small hill stations and towns in Europe and America have flourishing tourism industries with small, winding roads, so why can’t we?

Below is the story in pictures:

This road leading to the Nathiagali Bazaar was constructed during the British Raj. It has been demolished in order to construct a dual carriageway. Shopkeepers say the government has “ruined” the bazaar.

A view of the 40-feet deep parking lot that was set to be constructed. Locals say the government has now abandoned the idea of a lot, and is simply extending the road, obstructing current access to the shops.

Age-old trees destroyed. Could they not have been avoided?

Here is a picture of a newly carpeted road. Why have these trees been cut when they are clearly not obstructing the road path? The management displays a sheer lack of care for the few regions of Pakistan that remain in their natural, beautiful state.

Landslides, destruction and chaos on the roads leading into Nathiagali.

The township I strive to preserve.

In light of the above, I question Malik Amin Aslam, the architect of the PTI’s green growth initiative, about the efficacy of his Billion Tree Tsunami project (quoted by Rina Khan in Dawn).

Is PTI implementing a policy whereby every 100 trees chopped down in Nathiagali will be planted elsewhere? I fail to understand this “creeping green revolution” after seeing 200-year-old trees, which can easily be preserved, being destroyed on a daily basis on the pretext of “development”. The way the expansion project has been at a hiatus for the last 10 months is testament to an inefficient government’s effort and to what lies in store in the future for my home. Some argue the PTI is taking positive action in K-P, but the reality in Nathiagali says otherwise.

I urge everyone to press Imran Khan to bring an end to deforestation in Nathiagali. What does it say about our leadership, Mr Khan, knowing that we cannot even preserve a township of approximately 50,000 people?