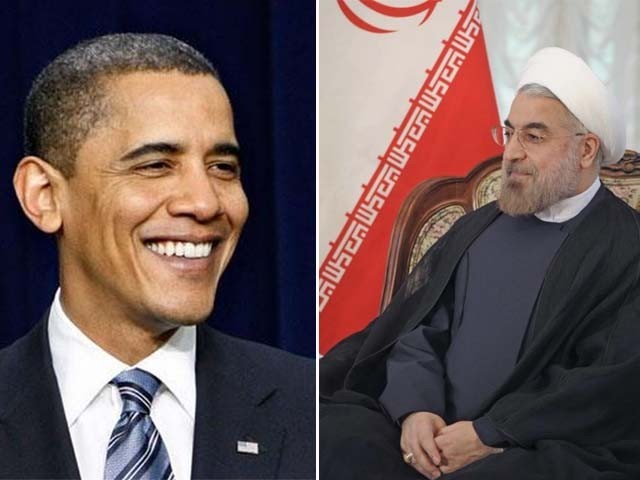 For President Obama this accord is the greatest victory of his foreign policy. Iranian President Rouhani smiling victoriously called the document historic. PHOTO:REUTERS

After 13 years of struggling and negotiating, a deal has finally been concluded between Iran and the West that rightfully is called ‘historical’.

The main bone of contention has been the Western fear that Iran might be developing nuclear weapons, which could destroy Israel and change the balance of power in the Middle East. Though the newly concluded long-term agreement is supposed to prevent this, Israel and Saudi Arabia, a newly found friend of Israel, have been first to condemn this agreement before the ink on agreement was dry.

Despite the fact that Iran always insisted that it was developing nuclear facilities for peaceful energy production only and never aimed at the production of nuclear weapons, the West, for its own reasons, preferred not to believe this and suspected the contrary though – like in the case of Iraqi weapons of mass destruction, where it did not have any plausible proof. A year of harsh sanctions against Iran and diplomatic isolation have made life for the Iranian people difficult and has put pressure on the new, less hard-line government to ease the life of Iranians.

Thus the main points of the agreement are the following:

– Iran has to dispose 95 per cent of its enriched uranium and to destroy or sell two thirds of its centrifuges. In addition, nuclear research will have to be not only restricted but open for International Atomic Energy Agency (IAEA) inspection.

– The Iranian nuclear program will last for 25 years, and will be re-allowed to produce nuclear energy for peaceful usage. In exchange, western sanctions will be withdrawn, the financial and economic ones in the first place.

– First measures are expected to be taken from early 2016 and in case Iran does not act according to its contractual obligations, sanctions would be re-imposed.

Despite these tough conditions, Iranian President Rouhani was seen smiling victoriously calling the document historic. Iranian people interviewed by media were hopeful for better living conditions in Iran in the future.

Since 1979, the year of the Iranian revolution assets worth billions of dollars are frozen in international banks that will now become available for economic development in Iran. For outgoing President Obama, this accord is the greatest victory of his foreign policy which he wants to set the otherwise less successful performance of his tenure right.

However, for him, the odds are much less positive so far. He will have to sell this accord to the Congress, and strong criticism can already be heard not only from the Republicans but from within his own party as well. Even Hilary Clinton has not voiced any enthusiasm, though as the possible future president, she might have to oversee its implementation, but at this point in time, she wants to have safe sailing and not antagonise the Jew lobby in her forthcoming elections.

Republican critics doubt that the accord is really limiting Iran’s nuclear capability and vow to boycott it in Congress. Reports coming from senate are also not in favour, and only time will tell whether President Obama will stick to his promise to veto in case the agreement is not approved by both the houses in the US.

The outcome of this tussle is still open and might be a nightmare for Obama.

The loudest protest is coming from Israel. Benjamin Netanyahu has severely criticised the deal and doubted that it will prevent Iran from building a nuclear bomb. He and the pro-Israeli lobby in the US will do everything possible to influence Congress members for voting against the deal. Severe critique is coming from Saudi Arabia and the Gulf emirates as well. They fear that with the deal in their hands, Iran will be strengthened economically and politically so much so that it will dominate the power relations in the region.

The reaction in Europe and Germany is more positive as they have learnt a lesson from the last two wars. Since the EU economy has been suffering from its own sanctions imposed on Russia, they hope relief from economic plunge by new opportunities of trade with Iran will open new vistas for peace and progress. All in all, the hurdles that have still to be overcome are formidable but given the positive impact of a crisis averted and a conflict solved, there is a good chance that all will go well and Iran can be a worthy member of the international community again and play its role in the changing global power relations.

With Iran being an esteemed neighbour of Pakistan, this will definitely improve the neighbourly relations. For instance, the Iran-Pakistan gas pipeline could go ahead and many other projects could be started or expedited.

However, there should be another lesson for Pakistan as well. Learning from the sacrifice that Iran made in order to improve the life of its population and to enhance its economic and political strength, it could encourage Pakistan to rethink the options for solving the Kashmir conflict in line with the commitment given through UN Resolutions to the people of Kashmir on both sides of the Line of Control (LoC).

Change in stance afterwards by erstwhile Indian leaders on Kashmir settlement, according to UN Resolutions, is the bone of contention that is strangling peace in the subcontinent and a solution of which could promote our membership in the Shanghai Cooperation Organisation(SCO), more beneficially for both India and Pakistan. That doesn’t mean to give up Kashmir but to move a stand on a conflict that has been there since the foundation of our country, has cost us several wars and countless lives of our soldiers while the conscience of the world is in deep slumber on this.

Pakistan has so far been unfair in tackling this issue due to the political expediency of our rulers. Take for example our nuclear issue; our rulers failed to take a stand against Israeli propaganda against the Pakistani nuclear program. The idea was sponsored after the Second Islamic Summit in 1974.

Pakistan has to learn the first and basic lesson to stand on its own two feet instead of looking for requirements of foreign donors and their assistance. It is a known fact that nobody is your permanent friend in today’s world; every country keeps its national interest closer to its heart than other countries’ interest.