Remembering the legacy of Nelson Mandela on his 98th birthday 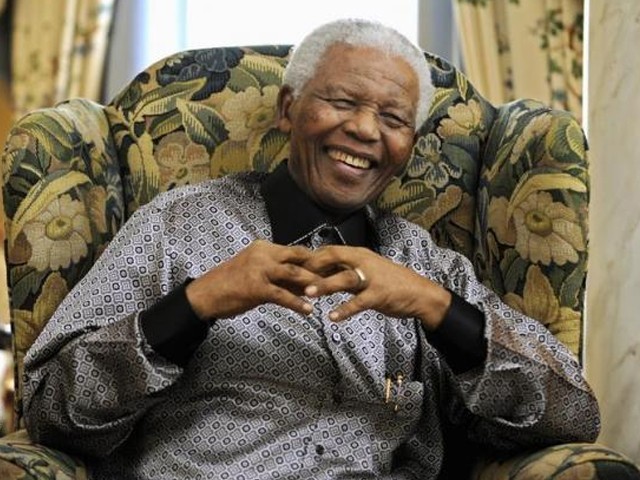 Mandela’s ability to build South Africa as a Rainbow Nation of different communities was highly appreciated by the international community. PHOTO: REUTERS

As the world burns along the shores of the Mediterranean to the heart of Africa and from the valleys of Tigris and Jordan Rivers to the Dnieper River in Ukraine, one wonders how Nelson Mandela would be celebrated on his birthday on July 18th this year.

Madiba (as he was called by the proud South Africans) held his ‘Long walk to Freedom’ covering six decades of struggle to rid the Black Africans of the ruthless Apartheid rule and give them a sense of dignity. The tall Xhosa and his simple soul were too strong for the white apartheid regimes of Southern Africa. His strong resolve to fight for self-determination and empowerment of the indigenous Africans won him many laurels in the international community.

Mandela’s life has been recorded in detail, from his birth in the Thembu royal house of Xhosa tribe to his death in December 2013 in Johannesburg. While it may be appropriate to review his complete life on the auspicious occasion of his birthday, I feel it more appropriate to highlight his contribution towards international peace and his ability to build South Africa as a Rainbow Nation, where all communities could live in harmony for collective good of the people.

This is also necessitated by the world of chaos and anxiety we see around ourselves; can we, the people of Asia and Africa, learn from Mandela’s legacy and turn the conflicting shatter zones of Middle East, North and central Africa into abodes of peace?

Mandela and his close associates had suffered enormously at the hands of White Apartheid regimes from Francois Malan in 1948 to FW de Klerk in 1988. He was chased, prosecuted for his liberal ideas, imprisoned at Robben Island and then transferred to Pollsmoor Prison, Cape Town with the total period of imprisonment spanning almost three decades.

Mandela was maltreated and kept in the squalid condition of a damped concrete cell measuring eight feet by seven feet and even poisoned (which later on developed into tuberculosis) but his will and resolve remained unshakable.

His high point of statesmanship was May 10th 1994, when he was sworn in as the first Black president of a South African nation as almost a billion viewers worldwide watched. Mandela’s ability to build South Africa as a Rainbow Nation of different communities and his reconciliation with his former tormentors (white leaders and the community) was highly appreciated by the international community. His policy of reconciliation laid the foundation of a modern South Africa, as he once remarked,

“Courageous people do not fear forgiving, for the sake of peace.”

Having travelled to South Africa and having visited Mandela’s monument in Cape Town, I was amazed by the magical effect of Mandela’s legacy. From the small village of Mvezo to the sprawling metropolis of Johannesburg and through the meadows of the coastal road leading from George to Cape Town, to the valleys of the lofty Drakensberg Mountains, the peace and harmony South Africa has enjoyed so far is a result of Mandela’s spirit of peace and reconciliation.

Although South Africa has recently witnessed some hindrance on the behalf of the downtrodden indigenous Africans in form of Xenophobia in the recent past, by and large Mandela’s spirit has held it together as one union of people, where you can coexist and prosper irrespective of your colour or creed.

I feel that Mandela’s legacy and spirit of reconciliation and peace can lead the world today through the bad patch of conflict and turmoil it’s going through, towards an era of lasting peace. I fail to understand why we, the people of Middle East, West Asia, and North Africa torn by petty conflicts and divisions, cannot coexist in the 21st century as normal and cordial humans.

Why is it that the egoistic regimes and their cohorts across the great divide of sectarian fault lines in the Middle East cannot sit down on one table and resolve their issues through dialogue and reconciliation?

How many more innocents will be bled in conflict zones to satisfy the power hungry leaders and surrogate groups like ISIS?

Can we learn anything from the icon of peace and reconciliation, the great Madiba?

I wish I had a magic wand to request his spirit to visit the warring lands and spread the much needed importance of peaceful coexistence.

The author is a Defence Analyst based in Lahore. He is an African Art enthusiast and loves to paint Africa's wild life in his leisure time. He tweets as @Waqark Khan