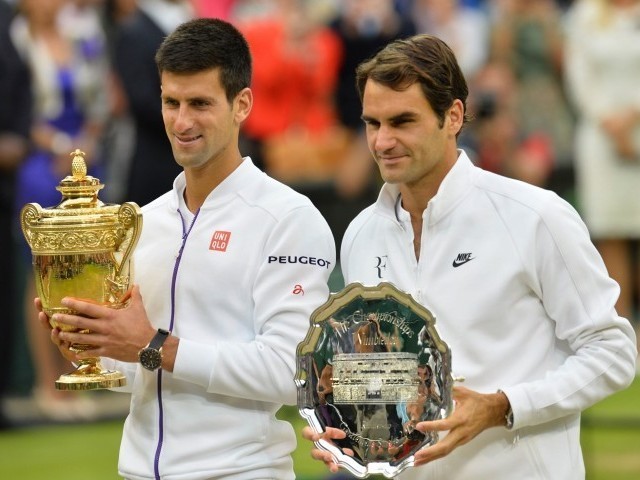 Serbia's Novak Djokovic (L) and Switzerland's Roger Federer hold their trophies during the presentation after their men's singles match on day thirteen of the 2014 Wimbledon Championships at The All England Tennis Club in Wimbledon, southwest London, on July 12, 2015. PHOTO: AFP

Regardless of how much the heart yearns for something miraculous to happen, the human mind has this uncanny ability to quash those hopes and let you see the reality of the situation. That same thing happened in the Wimbledon final between world number one Novak Djokovic and the man the Serb had idolised all his life — Roger Federer.

Federer, the darling of the world of tennis, the winner of 17 Grand Slams and a joint-record seven Wimbledon titles, had the entire world behind him. Every single fan wanted a fairy tale ending for the Swiss maestro who had inspired countless others in the last decade.

However, as history has taught us time and again, fairy tale endings are a rarity, and yesterday, Djokovic was, in all honesty, completely deserving to win his ninth Grand Slam.

The Swiss had come out blaring against the Serb from the onset and had taken the first break point, but Djokovic was undeterred and he immediately bounced back to take his own break point and eventually won the set.

Federer huffed and puffed from thereon and even managed to win the second set, that too by a whisker, but his once-infinite stamina gave way and he started giving points from many unforced errors. It was simply not to be Federer’s day. The once-mighty Swiss who was untameable at one point, had a chink in his armour now, and Djokovic knew it.

He made sure that the 33-year-old runs around and it was exactly that element which brought Federer’s downfall.

However, modest and humble as ever, the maestro was honest in his post-match conference. Federer said,

“I had my chances in the first set. I got lucky to win the second, had chances in the third, but he was better on the bigger points. He was rock solid, I didn’t play badly myself. That’s how it goes.”

We will keep our fingers crossed till the next time the Swiss maestro gets in contention to add another Grand Slam to his trophy cabinet. However, the heart sinks with the realisation that those moments can decrease with time.

Age is a phenomenon which befriends no one, and after all, Federer is only a human.

English Premier League transfers — Most expensive but not the most rational