Can the minions compete with Despicable Me all by their mischievous yellow-selves? 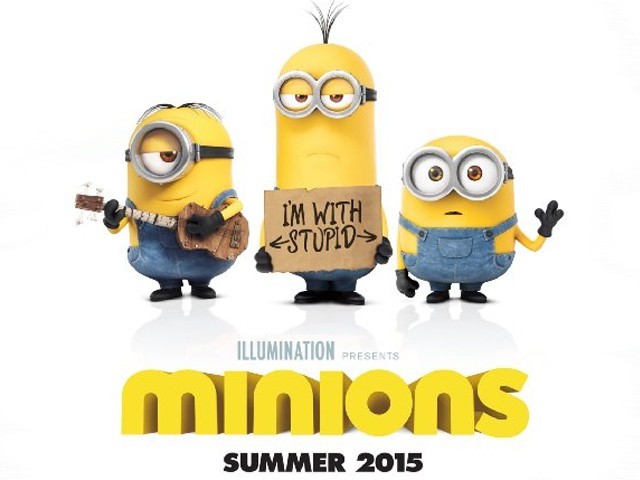 Minions will make you feel alive if you are an adult, and children will not stop laughing until the credits roll at the end. PHOTO: IMBb

After appearing as the henchmen and later as sidekicks of super evil felonious Guru in Despicable Me and Despicable Me 2 respectively, the little yellow-coloured, one-eyed, and two-eyed adorable creatures are back with their very own movie – Minions.

The movie, however, begins during the era of the dinosaurs, and shows the minions travelling in herds over a period of centuries in search for an evil mastermind as their leader. However, the minions are not that fortunate because all classic masters who they wanted to serve meet a tragic end. Watching these villains on the screen will surely make you feel like travelling back in time.

The story will tell you the reasons why the minions stopped their search for an evil master and why they lived in exile in one of the world’s most frozen areas, away from any human or animal life. However, the minions – known for their resilience and determination to get things done despite their miniature size – are not to be defeated that easily. The story then focuses on three minions, Kevin, Stuart, and Bob, who leave their herd behind to explore the civilised world in search for the most ruthless villain.

The minions enter civilisation during the 60s to find the master and they do so in a rather unique place. I will not go into the details of how and where the three minions find Scarlett Overkill (Sandra Bullock) and Herb (Jon Hamm), the two villains, whom the minions consider super evil. However, Overkill and Herb have plans of doing something with the Queen of England and the three minions are happy to assist them.

The movie then revolves around Overkill’s plan and the minions’ comical and ingenious ways to help her. During the movie, we find about the origin of the minions, the reason for their quest for an evil leader, and how they find the trademark clothing they wear – blue-coloured overalls.

The adult viewers may find some hiccups in the storyline as some parts do not add up, but perhaps that is the intention as nothing the minions do or say is of adults’ interest. However, Minions will certainly amuse the younger audiences with their gibberish language, facial expressions, vocal intonations, and their spontaneous acts of humour. The animators, therefore, must receive applause for giving attention to detail and for adding life in these creatures, making them children’s beloved characters across the world. Since the movie is about the minions, therefore, there are several one-liner jokes and antics as compared to the Despicable Me franchise.

Director Pierre Coffin (director of the Despicable Me franchise) has ample of experience working with the minions and knows exactly how to make them appear on screen. Moreover, many fans are not aware of the fact that Coffin has been rendering his voice for the minions in every movie they have appeared in.

Even when the minions are creating havoc in the movie, there is some sense of maturity as the narrator, actor Geoffrey Roy Rush, narrates the story – his voice adds charisma and gives logical appeal in all the amusing and hilarious disorders that the minions are creating. In my opinion, it is a combination that was risky, because maturity and senselessness can be a dicey decision. Nevertheless, the risk paid off well.

The only aspect missing from the Minions is that their adorability may not be able to bring out a Minions sequel. If there is a sequel, it must include Guru but showing the movie from the minions’ perspective is also a prerequisite. However, Guru does make a cameo appearance in the end and does something that ensures that the minions have found their new master.

Minions stands alone as a perfect comical adventure and delivers what it promises. Furthermore, there is not a single boring moment in the movie except for the scenes where all the audience gets to see is Overkill with no minions in it, but that was essential to move the story forward.

Surely, Minions will make you feel alive if you are an adult, and the children will not stop laughing until the credits roll at the end. The movie is the perfect entertainment option if you want your kids to have a great time, while you enjoy it as well.