Is Modi now credible and trustworthy enough to steer a peace process? 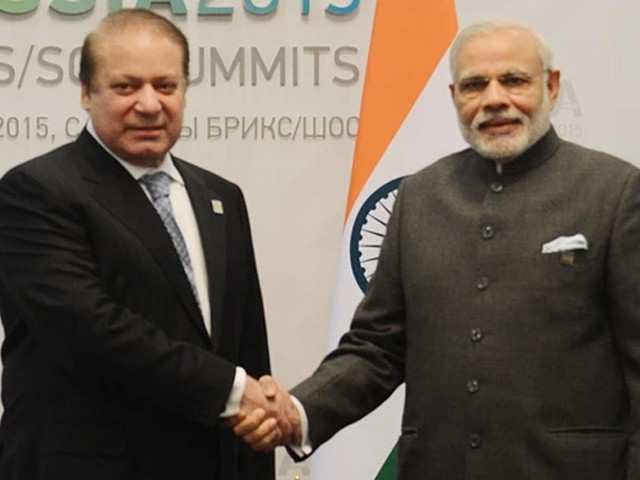 Dialogue has a long shelf life. It never gets old or fades away. Sooner or later it asserts itself. It renews itself. That is what has happened in the Russian town of Ufa on July 9th, when the Indian Prime Minister, Narendra Modi and his Pakistani counterpart, Nawaz Sharif, shook hands despite indulging into acrimony for a year.

The Indian government has termed the meeting a ‘breakthrough’ and counts it as a great step forward in dealing with Pakistan. The interaction has paved the way for both civilian and military engagement between the two neighbours in time to come, which will address all the concerned issues, including the vexed problem of terrorism. But before we welcome the new initiative, one needs to ask some uncomfortable questions.

Is the Modi regime ready to engage Pakistan in all seriousness, forgoing all the prejudices and hypernationalism of the past?

Is the dialogue with the Islamic republic a diversionary tactics to take away the attention of the people of India from the raging debate on corruption which has put the new regime in a politically difficult situation?

Has the ruling Bharatiya Janata Party (BJP) prepared its hard-core constituents and countrymen for peace with Islamabad?

And the most important question, is Modi now credible and trustworthy enough for the people of the subcontinent to steer a peace process, which became a victim of his own jingoism last year?

The new peace process has come at a time when Modi’s honeymoon with the Indian masses is all but over. The recent development within his party and the involvement of some of senior BJP leaders in graft cases has put a big question mark on the credibility of the prime minister. Instead of addressing the issues in a straight way, he has chosen to be silent thereby opening himself to allegations of compromising with corruption.

His six-nation foreign trip has also been overshadowed by the domestic political developments. Only yesterday when the talks with Pakistan started, his foreign sojourn came to occupy front page space. Indian people also want to know what he has achieved by the abrupt cancellations of secretary level talks last year.

People on both sides of the border were very optimistic about Modi’s initiatives in May 2014 and they were expecting some major paradigm shift in Indo-Pak relations. His gesture of inviting Nawaz for his inauguration ceremony got an overwhelming response from the people of Pakistan. No such goodwill exists now.

Can he generate the same momentum and trust now?

Domestic consensus eludes any new initiatives with Islamabad. Even if one excludes the pre-election rhetoric of Modi on talks with Pakistan, the narrative of his government so far has been largely strident towards the western neighbour. Till a few weeks ago, his ministers were talking about “teaching lessons to Pakistan”. The sudden development on peace talks is not shocking, but neither is it assuring.

The BJP government has not tried to reach out to the opposition, Congress, on peace talks. Before starting a dialogue with Pakistan, a tete-a-tete with domestic political players and the constituency is important. In the absence of any domestic consensus and debate, the reaction from the main opposition has been very belligerent. The media, particularly electronic, is jingoistic as usual.

The important thing is that the hard-core supporters of the BJP are not taken into confidence. Their experience in the last one year shows that the Modi regime has been rather silent on the aggression displayed by his core Hindu supporters, be it the issue of violence against minorities or the propagation of the divisive ideology of the Hindu right wing party, the BJP government has maintained an enigmatic silence.

Many compare the present peace initiatives with the former Prime Minister Atal Bihari Vajpayee’s similar venture during his term between 1998 to 2004.But Vajpayee was a moderate leader and his gesture was always received well across the political spectrum. Modi is a hardliner and a divisive figure, therefore, he cannot carry everyone together.

In the last one year, Modi’s relationship with Muslims in India has been mixed. On the one hand, he tries to reach out to the community, but on the other hand, he allows the fringe element in his larger family to launch offensive attacks against the minority community. Bans on cow slaughter in Maharashtra, rise of religious violence in BJP ruled states such as Haryana and other areas, have pushed the largest minority of India into a corner. This development combined with Modi’s established anti-Muslim image does not add trust value to his new initiatives with Pakistan.

People in the Islamic republic would always be wary of the move of the Indian leadership.

Talks, nevertheless, are good for the health of the Indian subcontinent. Scepticism and cynicism are valid but no one can discount the supremacy of dialogue for a peaceful future.

People in Pakistan should also support the new beginning without any reservation. They should not allow the establishment and the parochial political interest to hamper the peace process. The history of Indo -Pak talks has been full of missed chances and opportunities, full of flips and flops, therefore, the latest trust building exercise does not inspire much confidence amongst its people.