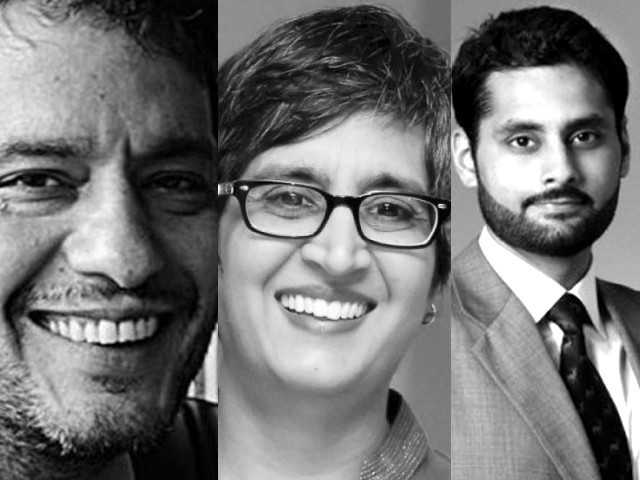 In May 2013, just a little over two years from now, there was a wave of change which brought with it new possibilities and ‘hope’. Pakistan People’s Party’s (PPP) tenure had come to an end and elections were going to take place. We had various political parties competing against one another for the win. In the entire hullabaloo that was taking place, there was one young man, about 26-years-old who ran for the NA-250 constituency. Jibran Nasir ran his campaign actively on social media and other forums, and gained many followers, however he lost the political end game.

Shaan Taseer, very well-known in the social circuit for belonging to a well-off family and the son of Shaheed Salmaan Taseer who was murdered in cold blood for ‘blasphemy’ charges, has been seen standing by Jibran through all his campaigns. According to Shaan,

“I think the Jibran that stood outside Lal Masjid against extremism is the same man that stood for the 2013 elections. The basic demand is the same; transparent governance.”

For a while, there seemed to be silence from this young man. Many thought that he ran for a political career out of sheer patriotism. Yet, when the unspeakable Peshawar carnage took place, we all saw Jibran back on social media, on our television screens and on the roads. It was a day that has scarred Pakistanis to an immense degree. Keyboard jihadists began tweeting and putting Facebook statuses against the Tehreek-e-Taliban Pakistan (TTP) faction that had taken responsibility of the gruesome attack on innocent children who were murdered in cold blood.

Our political leaders solemnly condemned the act, as they always do. Imran Khan, the leading political frontrunner of Khyber-Pakhtunkhwa (K-P) took days to visit the grieving families, while our Premier Nawaz Sharif was seen giving a televised condemnation. As the country mourned, Jibran and his team took the stance of justice and “transparent governance” to the next level. He ran campaigns on social media and got around to making sure that humanity existed. It was a breather in a nation that has been dead for quite some time.

As events unfolded, we saw Jibran and Shaan braving the intense cold in early 2015 and standing against Abdul Aziz and the likes of him who blatantly spread hate speech in their sermons. So much so, that this same Maulana who is now referred to as Mulzim (criminally accused), Aziz did not condemn the Peshawar attack.

Aziz was a part of the Lal Masjid incident. He was the same man who wore a burkha (veil) and ran away. He is also the same person who has been invited many times over by renowned television channels spreading hate speech. Yet, no one dared to question his morality. This bearded man was pious, and although pretentious piety was at its best with Aziz, not a single television anchor who hosted him, asked about this man’s ethics.

The Peshawar attack changed people’s mind-set. Yet, Abdul Aziz was still not held accountable for not condemning the attack and carrying on with his hate speech. It took a 27-year-old nationalistic young man and his team to gather and stand against him.  In Jibran’s words,

“Islamabad in December 2014 was not a city much known to me. I hardly knew any people there. On the first day when I stood outside Lal Masjid to condemn Mulzim Abdul Aziz, there were hardly five people whom I had met for the first time. Yet, it was nothing but a natural reaction a sort of an expression of our individual frustration.”

“I was there on the second day, on Jibran’s call. Power drunk with the belief that Mulzim Aziz is above the law; he issued a press statement threatening to harm us all. It was then that we marched to the police station and filed an FIR against him”, recalls Shaan.

“In a greater scheme of things, it was (the movement) one of the most positive way that the citizens of Pakistan could have responded.”

Undoubtedly, we saw that there was a collective mind-set of humanity that was being questioned.

“We are not a nation of quitters nor is violence inherent in us. We just need to galvanise and channelise this potential,” he continued.

Currently, Jibran is involved in two projects. One is “Pakistan for All”, for which Shaan is the co-founder with Jibran. This project is an advocacy collectively aimed at giving voice to the marginalised sections of the Pakistani society. The project works for recognition and enforcement of civil liberties that cut down on hate speech and fight censorship. It is very much an extension of Late Sabeen Mahmud’s activism, as she herself was the co-founder of the project. Remembering Sabeen, Shaan adds,

“Memories can be short in our part of the world. However, in this case we have not forgotten Sabeen or the children of APS. Citizens in Pakistan and in the Diasporas have commemorated the Peshawar tragedy on the 16th of every month globally. A movement of consciousness is underway. It may seem that our heroes are forgotten, only because people need to move on in their lives, but a change in the zeitgeist is underway.”

The second project that Jibran is involved in is called Never Forget Pakistan (NFA). This project is an online media platform that he has created with a group of concerned citizens. The NFA is aimed at not only creating a counter narrative to religious extremism, but also populating it amongst the masses.

One of the most important aspects of both the projects is to ensure that our martyrs and heroes never become a fading memory. According to Jibran, it is apathy that results in people to forget easily.

There is one particular slogan that usually strikes the mind when Jibran’s name comes up, that being “Reclaim Pakistan”. When asked what this slogan truly means, in his apt words he replied by saying,

“It is not what I believe but what our reality is. Our country is home to over 15 ethnicities and it has more than 20 languages, while it practices many faiths. This speaks intrinsic ‘tolerance’. It is an innate notion of co-existence which is eroding and being lost to the growing radicalisation that was imposed on us due to state policy.”

‘Reclaim Pakistan’ is in short, going back to our roots, where we are one nation belonging to one blood. It is indeed, humanity before faith or creed. In Shaan’s words,

“It means to take ownership, control the narrative and to play your part as a responsible citizen.”

When I asked them how they are planning on tackling issues related to minority killings, Balochistan, Taliban and other grave issues in Pakistan, whether it is the massacre of the people of Hazara, or Christians being lynched or the Taliban going on a killing spree of innocent children and women, Jibran replied,

“For starters this question should be asked from Nawaz Sharif and Raheel Sharif and all chief ministers, people who have signed up and are paid for this job, not from ordinary citizens like Shaan and myself who are doing activism because we feel passionately about our country. Still, in our limited capacity through projects like Pakistan For All and Never Forget Pakistan we are trying to ensure sustainable means of carrying on the work.”

“We will continue to do whatever it takes to make more and more Pakistanis speak out. Those tactics may include social media, mainstream media, protests, or holding the government accountable through litigation. The goal is to break the apathy.”

On this note, we are proud to have people like Jibran and Shaan working fervently for our nation’s betterment and our basic civil rights. We have had people like Sabeen and many more who were driven in the same direction as these two patriotic gentlemen. However, we lost them too soon to cold blooded murders, yet they are our heroes, and Jibran as well as Shaan strive to keep their memories alive albeit fighting for a nation that has been looted, corrupted and tarnished.

We pray that they achieve their goals while the Pakistani citizens realise their worth and work alongside these two living heroes.