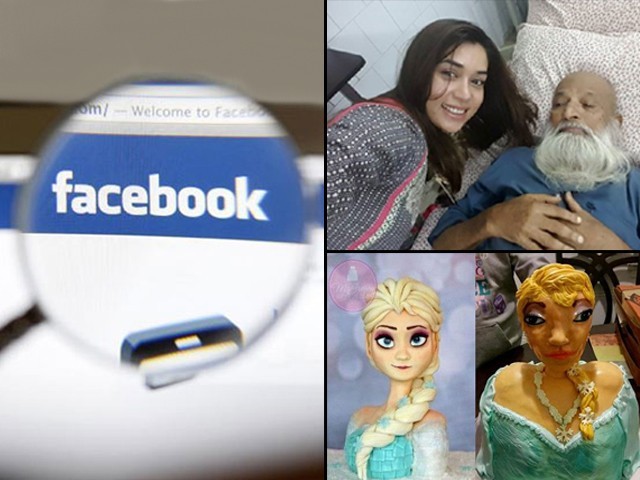 On social media, however, there are no rules. We are completely and truly free.

The social media, particularly Facebook, has transformed into a deadly force to reckon with. Its raw and potent power struck me in the wake of three recent issues that, although unrelated, have garnered massive negative response by the public. In all three issues, there was another side to the story, which majority of those who were commenting on the posts relentlessly, were not aware of.

The first is that of Komal Rizvi’s controversial selfie with Edhi. There were countless memes made, which led the singer to release an explanatory post.

The second issue concerns the alleged medical negligence of Dr Shehnaz Hussaini to her nine-month pregnant patient – Shaista Omer – who died during labour under her care. The family has pressed charges against Dr Shehnaz, while she continues to hold an unforeseen complication at the time of the delivery as the cause of death.

The third is the case of a Frozen-theme cake which was labelled as being “creepy and scary”. However, it was later revealed that it was made by a baker for Icing Smiles charity and the sick children were quite delighted with it. One comment on the thread even clarified that the baker tries to “customise all the characters to Afro-American features”, which is why the cake looked the way it did.

The reaction of the public to all three issues mentioned above has been fairly appalling.

In a physical social setting with five to 10 people in the room, one tends to choose one’s words carefully. We pay attention to our dialogues, watch our tones, screen our thoughts and use a brain-to-mouth filter. We’re aware that we might be judged, we don’t want to make enemies, and consequently, we adhere to the social norms and etiquettes.

On social media, however, there are no rules. We are completely and truly free. Protected behind the screens of our laptops or smartphones, we tend to overstep the line. Stumbling across any issue at all – serious or otherwise – it becomes incumbent on us to “give our opinion”. Not knowing the whole story, not having all the facts – that does not matter. Comment we must.

We shut off our rational thinking, and embrace the emotions coursing through us. Without being remotely sensitive of how our words will affect the other person, we spew them out, our fingers tapping mercilessly, not realising that our words might reduce the person on the receiving end to a shattered and broken mess. We debate extensively and criticise endlessly on issues that don’t concern or involve us in any way. It is classic narcissism, I think, which drives us to present our thoughts. Like our opinions are so significant, the website would come crashing down if we choose to withhold judgement.

The comments on the Facebook posts regarding the incidents above makes one shudder, when one realises how mob justice is not just existent in rural and underdeveloped areas, but is also prevalent and thriving in the urban, modern cities where people have smartphones and 24/7 access to the internet.

The angry crowd of people descend onto the helpless victim, eager to dole out justice, without any prior investigation into the matter, without listening to the other side, not pausing to think how depressing and painful the victim will find their comments when they come across them. Badmouthing, swearing, hurling accusations and insulting in ways unimaginable, people continue to wreak havoc. There’s zero sensitivity and zero tact, because there’s no regulation on the social media. One is the ultimate master and authority of one’s profile, and there is no accountability for what one says.

In the civilised society where physical mob justice is considered an unacceptable crime, maybe the virtual, online version of it should be held in similar contempt. There is a consistent association between cyber bullying and severe depression. The worst part is that this type of depression is often coped with alone. The victimised person is shamed into silence, and hesitates to share the countless insults and profanities hurled at him/her by total strangers. The world hating on someone has got to sting bad.

It’s high time we start paying attention to exactly what we’re typing out on our keyboards. We need to acknowledge the heavy implications of the statements we throw around so casually on social media. We need to realise that the person we’re discussing is not just a name on the social website, but is an actual living, breathing, feeling human being. We must learn to choose our words with caution, because who knows what our words will push the other person to do.

Suicides have resulted from cyber bullying, and the responsibility solely rests with those who tortured the victim with their cruel words. Civility is as much needed on social media as it is needed in physical gatherings, because the same people are involved. You can’t get away with saying whatever the heck you want, because you don’t have the right to slam the other person with your offensive comments.

Perhaps the social media sites need to curtail some of the freedom of expression that they have provided the masses with. This freedom is clearly being misused. Greater regulation needs to be imposed. Maybe an automatic filter can be introduced to all social websites that will screen out the crass and derogatory language people use. It would defeat the original purpose of such forums, but the alternative is more troublesome.

The sad truth is that ‘freedom of expression’, fuelled on by modernism, is slowly leading to a society where nothing is holy and nothing is respected. Every symbol – be it cultural, traditional, religious or otherwise valued by a particular set of people – is open to mockery and ridicule. The result is an obscene society – a place devoid of values, proprieties, respect, and humanity. Unless we work on combating excessive freedom of speech on social media, it will persist and society will fall prey to its consequences.