Dear PTI, your DJ Butt is no better than PML-N’s Gullu Butt 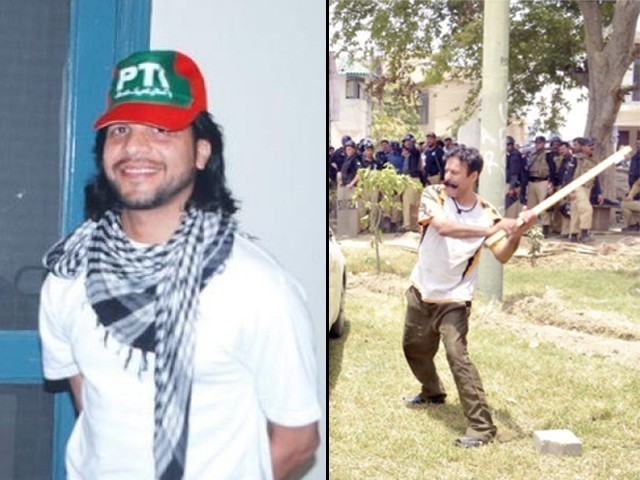 I have no issues with either Gullu or DJ Butt, since both of them are nothing more than pawns being used by the party.

These days, it is easier to find a similarity between the colours black and white as compared to finding similarities between Pakistan Tehreek-e-Insaaf (PTI) and Pakistan Muslim League-Nawaz (PML-N).

You will always find them on opposite sides of the table, bashing each other with no holds barred, accusing each other’s leadership of being corrupt, disloyal, and crooked. Their followers seem to be following the same course as well. They stoop to petty lows to defame their counterparts. Social media is now being used as a popular weapon where even personal lives of leaders are not spared.

Interestingly though, these rival parties do have one thing in common – they have produced gems as their sidekicks in their tale of politics, gems who show a variety of colours in the politics of Pakistan. They are none other than Gullu Butt from PML-N and DJ Butt from PTI.

To start off, I have no issues with either Gullu or DJ Butt, since both of them are nothing more than pawns being used by the party. While Gullu is a real exhibition of what the powerful can do in this country, the latter, depict the financial cost of a political activity.

Gullu sends out a clear message to the common man that if you want to take part in the politics of this country, this is what you have to deal with – a car-smasher who reminds us of the game Street Fighter in the bonus stage, ramming vehicles under the presence of the ‘custodians of law and order’, the police.

On the other hand, DJ Butt is a testimony to how much money one has to have in their bank accounts in order to arrange a decent sized protest and cover the cost of loud speakers. And obviously, you also have to cover the cost of chairs, the tents, food, etc. For those who haven’t read DJ Butt’s story, he has billed PTI for a whopping Rs14 crore, out of which six crore has already been paid and discussions are underway to settle the remaining debt.

For me, it all comes down to a couple of straight forward features of politics in Pakistan, power and money. Thugs, goons, and looters are nourished by the powerful in order to get their dirty jobs done. These jobs include everything from threatening to plunder and from rape to murder. Remember, Gullu is just one soldier from this notorious army and thanks to the media, at least one culprit was exposed. I am quite sure that some other soldier belonging to this army has been used to take down the custom officer in the on-going Ayyan Ali case.

But all jobs can’t be done by the brute force, and that’s where the other dimension of Pakistani politics kicks in – the money. I am not a fan of the metro bus, neither do I support PTI, but it’s really interesting to note that the PTI supporters, who were accusing the government in connection with the metro bus project, are now nowhere to justify their own party’s doings.

Fourteen crores for some dance, party, and masti (fun), while millions are suffering in Khyber-Pakhtunkhwa (K-P) in IDP camps, pleading for clean drinking water and health facilities, is unjustifiable. However, it highlights the vicious role money plays in the whole political setup.

Fifty shades of Grey may be very interesting, but it’s definitely not as interesting as the infinite shades of Pakistani politics.