Younus Khan rains on nine-year Lankan drought in the Island 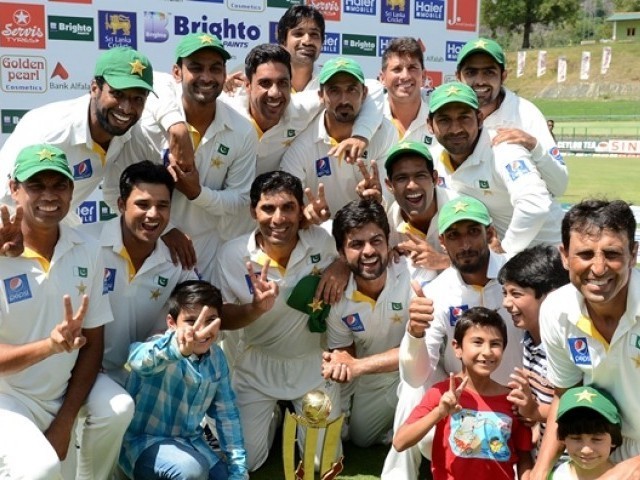 Pakistan cricketers pose after their team's series victory following the third and final Test cricket match between Sri Lanka and Pakistan at The Pallekele International Cricket Stadium in Pallekele on July 7, 2015. PHOTO: AFP

Misbahul Haq was optimistic that the absence of Kumar Sangakkara and Mahela Jayawardene on the Sri Lankan side would increase their chances of victory, but he forgot about Dimuth Karunaratne and the new young captain, Angelo Mathews, who scored centuries in the first and the second innings, respectively.

Meanwhile, the Sri Lankan team were harnessing skills to counter leggie Yasir Shah who took yet another fifer in the first innings, but they forgot to prepare for Imran Khan’s pace bowling on the good Pallekele track, where he dismissed the entire remaining five batsmen on day four of the Sri Lankan second innings.

Younus Khan, however, most would think, was still in the trance of his 100th Test being spoiled by a comprehensive loss to the Lankans. But the ‘Khan’ was down but not out. A 171-run unbeaten innings in what is touted to be the most difficult innings of a Test match – the fourth innings – would have taken something special from the Pakistan veteran. 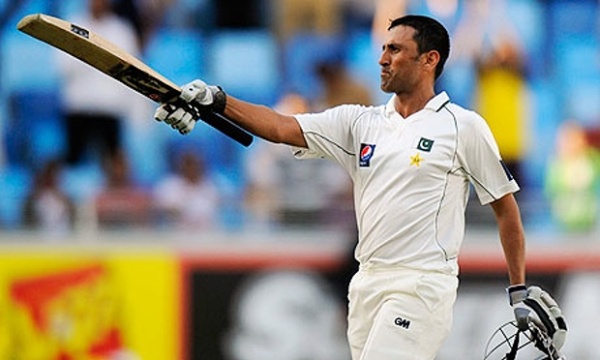 Sri Lanka scored 278 in the first innings and Pakistan replied with a hesitant 215, courtesy Sarfraz Ahmed’s late surge to fight for his 78. The Islanders, then, riding on the back of a 63-run lead, put up a hefty 313 on board stretching the lead to 377.

With the frame of the mind that Pakistan have been in the past, they would have opted to play slowly and try not to chase down the target on a wearing pitch where one wicket could lead to a sudden domino effect. However, when Ahmed Shehzad and Azhar Ali did what the Shaheens are famous for – take the long walk back to the pavilion as early as possible – opener Shan Masood and the miraculous Younus stepped on the gas and took the match away from the hosts, with one day left and less than 150 runs to chase.

Younus, with his unbeaten century knock in the third test, added another feather in his milestone cap when he became the first Test batsman ever to score five centuries in the fourth innings. Masood also entered his name in the record books by becoming the sixth Pakistani opener to score a century in the fourth innings of a Test.

Moreover, Pakistan as a team, were able to chase the highest test total in their cricketing history as Misbah hit Jehan Mubarak out of the park on the first ball of the 104th over. They also became the highest run chasers on the Sri Lankan pitch and the second highest in the sub-continent.

An ecstatic Misbah said that staying calm and keeping their cool was the trick behind the chase, while Younus backed his statement and claimed that they are both responsible for keeping the younger and more energetic Pakistani batsmen calm under pressure.

The cherry on Pakistan’s victory cake was, without a doubt, placed by Yasir Shah. He completed his 50 Test wickets in the fastest time for Pakistan and also jumped up quite a few places to enter the top 10 rating for Test bowlers with only 10 outings.

Pakistan has been resilient and fantastic when it comes to Test series for the last nine months. An Aussie whitewash in the UAE, a drawn series against the Kiwis and a series victory against Bangladesh have brought the men in green to the third position in Test rankings. Surely, the series win has provided Pakistani players with confidence after such a staggering performance in the longest format and if channelled efficiently, an ODI series win can be on the cards for the visitors.