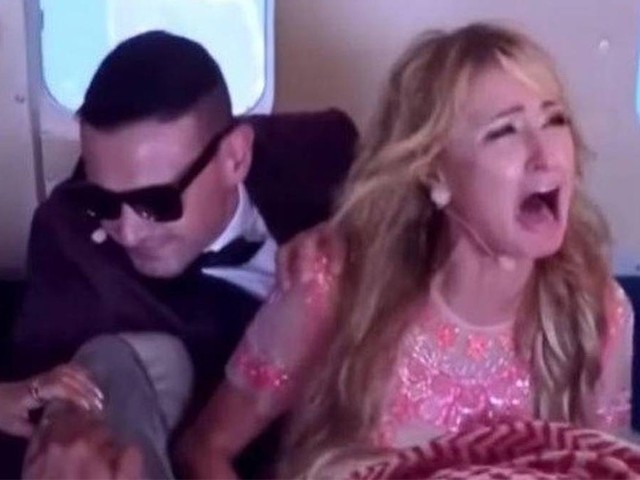 The viral video that showcased Paris Hilton being allegedly tricked in to believing her plane is about to crash didn’t make me laugh. PHOTO: SCREENGRAB

The viral video that showcased Paris Hilton being allegedly tricked in to believing her plane is about to crash didn’t make me laugh; it didn’t even make me smile or chuckle inwardly. In fact, I was struck by strong indignation as Ramez Galal, producer of Egyptian TV series ‘Ramez in Control’, made the 35-year-old socialite believe that the plane she was getting an aerial view of Dubai in was about to crash.

I grimaced at the ensuing scene of horror and panic while Hilton displayed the appropriate amount of terror. When the man posing as a flight attendant opened the back hatch and dragged another man out of the plane, my heart bled. The canned screams and practiced terror followed by laughs and mentions of the word ‘joke’ made me seethe in fury.

In the last year alone, hundreds of families have lost loved ones to aviation disasters. Many bodies were so badly mangled in these plane crashes that countless people did not experience the closure that comes alongside saying goodbye to their loved ones one last time and formally burying them. There were families who lost not one, but multiple members in different plane crashes. Then there are those who are still waiting, every single day, for news — any news— of loved ones who were aboard the MH370 that vanished in March 2014. Just three days ago, an Indonesian military plane went down killing 140 people – that is 140 families who lost someone they loved.

A plane crash is not funny. It is deathly serious.

Stories have emerged that Hilton was in on this prank and that the production company was offering somewhere in the million-dollar range to any celebrity willing to partake in it. If this is indeed true, it is unfathomable as to how any feeling person will accept money for a deed that hurts the sentiments of so many – and for what, a few seconds of publicity and a viral video? It is utterly shameful and beyond belief.

I would like to ask Mr Galal and all those on board this ‘joke’ if they, for one second, considered how people who have lost loved ones in a plane crash would feel while watching this video. When you carried out the carefully orchestrated plan of a man being flung out of the plane, did you, Mr Galal, think of all those who didn’t have parachutes or any safety gear to break their fall? Did you think it would be funny when mothers and fathers watched, replayed and imagined the horror their children might have gone through in the last seconds of their lives?

Karen Perry lost three of her children in a plane crash in 2011. No bodies were recovered in this plane crash, so Perry considered the Superstition Mountain in Arizona where the plane crashed, the gravesite of her three children. Even years after losing her kids, Perry finds the loss hard to cope with.

Your crass video, Mr Galal and Miss Hilton, is disrespectful to mothers like Karen Perry. Making a joke of the very real pain and terror people feel in their dying moments is not funny. And accepting money, Ms Hilton, for hurting people’s feelings is not funny.

Red is such an ugly colour on green