In Iran, you can marry your 13-year-old adopted child 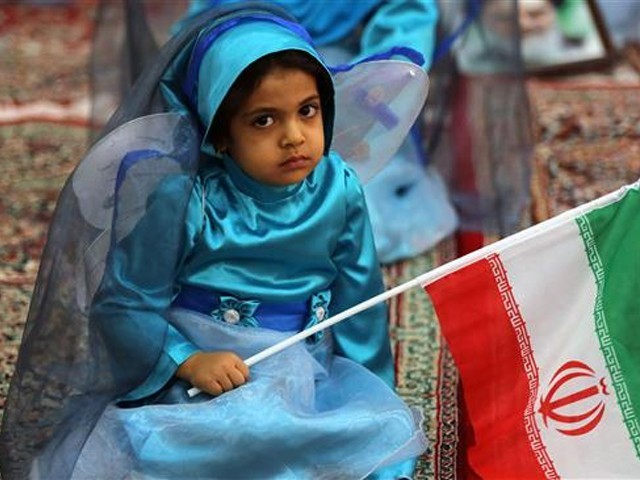 A young Iranian girl holds a national flag during a ceremony marking the 36th anniversary of the return from exile of the founder of Iran's Islamic Republic, Ayatollah Ruhollah Khomeini. PHOTO: AFP

Define irony: When you pass a bill to ‘protect’ children and in that bill you allow a man to marry his adopted daughter even if she is as young as 13-years-old.

Woody Allen, are you listening? I think it’s time to move to Iran. Or at least base your next movie there. Or maybe George RR Martin would be interested in this as his next plot twist?

Parliamentarians in Iran have recently passed such a bill, I kid you not. It allows the caretaker to marry his or her adopted child if the court rules in the interests of the child. There are so many fundamental issues with this bill that human rights campaigners in Iran are, quite understandably, distressed.

It is ridiculous to assume that a caretaker can only fend for the adopted child in the shape of a marriage contract. If the child is still under adoptive custody, what sense does it leave for someone to marry them – other than physical or maybe, in certain cases, financial exploitation? The even more disturbing fact is the age limit. This allows, as rights activists note, paedophiles to act freely and legally. All they need to do is adopt/marry their victims and they are completely safe from all kinds of punishment.

Officials claim that this is a bill that helps solve the ‘headscarf’ issue – such that a girl in the same household, who reaches puberty, does not have to wear a headscarf in front of her adoptive ‘father’. This argument holds absolutely no water at all. In order to help women maintain their veil/pardah, the answer cannot possibly be for them to marry their adoptive fathers.

What’s next? Marry all your cousins if you live in a joint family system?

Countries such as South Africa, Taiwan, Turkey, United Kingdom, United States, Australia, and New Zealand all have strict laws against marriage of adoptive parents to their adoptive children. What possessed Iran, I wonder, to pass a law that not only creates a frightening loophole for paedophilia but also a way to further entrench women of the society?

In Iran, it is permissible for a girl under 13 years of age to get married via permission of a judge. Instead of addressing this issue and instead of legalising the age as more than 16, which is the standard for the rest of the developed world, Iran has taken a step back in the field of women empowerment.

Even though the said bill is yet to find a verdict from the Islamic Guardian Council in Iran, rights activists are concerned because it just might pass this time around. Shadi Sadr, a human rights activist working for ‘Justice for Iran’ fears this bill will be passed by the Guardian Council. Her fear is that this would eventually be paving way for legalising incest and paedophilia. The previous bill had completely prohibited marriage to adoptive children but this one might pass because it includes the ‘headscarf’ as an Islamic legal loophole to let these marriages take place.

She’s not wrong. In 2010, 42,000 children between the age of 10 and 14 were married off in Iran. Conservative and fairly retrogressive councils such as these need to be monitored and criticism for their decision should be allowed, as they should definitely not be considered as the last legal stronghold/authority for human rights clauses. While their suggestions can be taken seriously and their reservations can be addressed, letting laws become their personal and religious battleground will not bode well for anyone – and from the way things are right now, especially not for the women of Iran.