Some of us cannot afford the hijab of today 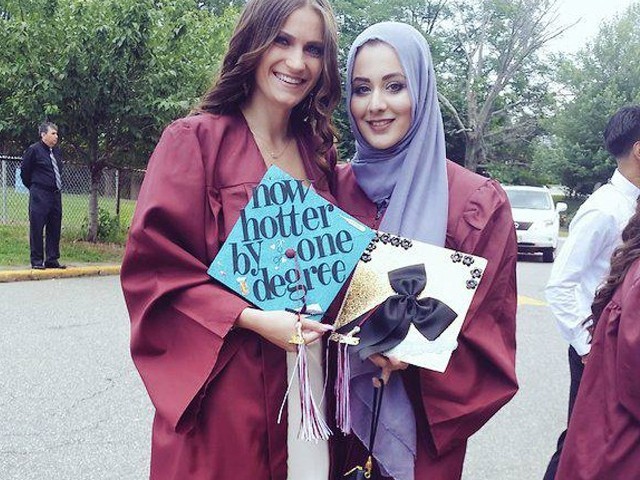 Abrar Shahin is a Muslim student of Palestinian descent who recently graduated from this school. PHOTO: TWITTER (@AbrarShahin)

There is a school named The Clifton High School which is not in Karachi but in New Jersey, USA, and Abrar Shahin is a Muslim student of Palestinian descent who recently graduated from this school. Sincere congratulations and best wishes in her subsequent career to the young lady who appears to possess a strong sense of identity since her photograph shows her wearing a hijab, and who is about to present us with what I hope, a healthy debate.

In the hormone-charged atmosphere of high schools, where girls dress quite revealingly, it takes conviction to cover your head with a scarf at all times. In her year book, Ms Shahin was seen wearing skinny jeans, ankle-high boots and a cropped white blazer in her yearbook photo, and if you look at her photograph, you will find that she is also meticulously made up with eyeliner, mascara, the works, the cosmetics, as a reporter for NorthJersey.com puts it perfectly,

It is interesting but not unusual. My children also went to a high school in the US where there were other girls similarly dressed in tight jeans, fully made up, but also wearing a hijab. My own daughter, whose mother did not agree with hijabs, did not wear one, and her jeans and tops were relaxed and not as fitted. I cannot recall her ever wearing make up to high school.

So tell me, not because I wish to be judgmental, heaven forbid, but because being human I am tired of some people flaunting a halo in addition to a hijab and I need this outburst, what is the purpose of a hijab?

Is it not worn to prevent men paying attention to a woman’s charms?  And is that all there is to be modest about in a woman’s body, the hair on her head? Is there not, if one must be obsessed with the subject, the face, the figure, and a lot else that constitutes female charm? I knew someone, my father in fact, who never considered a woman beautiful unless her feet were clean and well kept. And someone else who felt that there was nothing more attractive than a woman who wore a light perfume and nothing more off putting than one who wore something strong ‘like Charlie’ is what he said to be exact.

I suppose from some quarters the response will be that this is why women should be (according to them) covered from head to toe – incarcerated.

I know a very nice lady. She is covered from head to toe in what she tells me are mostly French chiffons. That, in my book, encapsulates the matter quite neatly. There is nothing more elitist, nothing that contributes more to the ‘great divide’ than such ‘pardah’. Only the rich, the very rich can afford to be quite so ‘religious’ which should make us question if that, after all, is what was intended by the religious requirement of modesty, to question the definition of ‘pardah’.

The rest of us who have to earn a living, who have to live with the curse of power load-shedding and who cannot afford fabric that drapes and breathes as well as chiffon either die under such incarcerating conditions (Karachi heat wave) or live a bit less encumbered if modestly, and rely on our own lungs not the abaya to do the breathing.

As an aside, please allow me to tell you that the fully incarcerated lady cannot exercise in her driveway as she used to in her pre-incarcerated days because of the chowkidar (security guard), so she must now do so in a gym. Also that she carries a spare set of slippers in her car in case they visit a home where she must sit in the same room as the men. In that case she wears the stodgy pair; otherwise she wears the prettier ones.  It is mind-boggling, is it not, how much thought in addition to cash goes into incarceration?

I am struck by the sentiment and the utter dedication to the subject of sexuality. But think for a moment. The world has come to a stage now where people eat breakfast on the hoof. While I do not agree with this other extreme of lifestyle, it gives some idea of how busy a world it now is. How much there is to achieve, and how much one has to adapt to get out of this rut we have fallen into. Our country is perilously short of water, power, education, justice, funds, political stability, women and children’s rights, health facilities, nearly everything. And we are stuck, mired, up to our heads in abayas, hijabs, trailing dupattas (the mind boggles in what all these trail in) and nothing but.

I am a woman. I dress well, and modestly enough. My son would never, ever treat a woman with disrespect much less hoot and whistle at one. I think this is the real pardah. Sometimes the route to self-respect and dignity is via both sexes, with the aid of nothing more than a bit of decency and common sense. A shroud is not required.