My husband is gay – A difficult truth 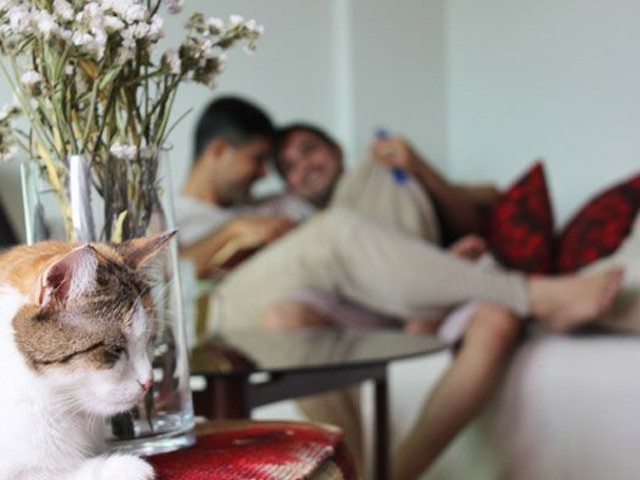 The existence of gays is a reality in our society, whether in closets or out of them, they exist and are a part of our society. PHOTO: BBC

On her wedding night, *Hira found out that her new husband had a male partner. Her world came to a standstill. He told her not to expect much from him because he had no inclination towards her as a wife. Hira came back to her parent’s house the same night and when she confronted her in-laws, they sheepishly replied that they thought he would be ‘fine’ once he got married to a girl.

*Shumaila’s husband lived in the UK and, despite having been married to her for eight months, didn’t sponsor her visa so she could join him in London to start a home and a family. Shumaila’s father somehow managed to get her the UK visa and put her on a plane to London. Upon her arrival in the UK, Shumaila was devastated by her husband’s rude and cruel behaviour; he seemed to despise her for reasons she didn’t even know. Ultimately, she discovered that he was gay and was living with his male partner who had to move out because of Shumaila’s arrival. Her in-laws never believed Shumaila’s narrative and blamed her for not making an effort to win her husband’s love. Their marriage ended in a sad divorce.

*Ifrah and *Sohail had been married for six years and had an adorable four-year-old son. Many a times, however, Ifrah saw her husband exchanging intimate texts and emoticons on his cell phone with his friends. He always told her not to worry about it because they were just his friends and men just communicate like this. After a few years though, her husband’s behaviour, interests and relationship with other men changed. Soon after she realised what was happening, he adopted a ‘take it or leave it’ attitude with her. Her happy little world, the family she built over years, all fell apart. She thought of giving her husband a divorce, but her parents refused to support her decision, fearing disgrace and finding it hard to get good proposals for her unmarried sisters in the presence of a divorced daughter at home. Their advice to Ifrah was to somehow ‘manage and get along’ with the same life.

‘My husband is gay’ – are not easy words to come to terms with. The painful discovery can, often times, shatter the dreams of a woman who married someone in search for love, family, security, stability and a partner. Such cases being taboo are not discussed very openly in Pakistan but they do exist, and are rising every day. Wives are silenced and along with their voices, their desires and needs are also muzzled. Instead of a ‘happily ever after’, something every girl dreams of when getting married, they forever left to live with questions like ‘did I make this happen?’ ‘what did I do to deserve this?’ or ‘why am I being punished?’.

The existence of homosexual men and women in our society is a reality; whether this happens inside closets or out of them, they exist and are a part of our society. A person’s sexuality is their own business – so I am not here to judge. The issue that is of concern to me today is the social crime that exists when the sexual orientation of an individual is not revealed and in turn ends up destroying the innocent lives of people who tie the knot in hopes of pursuing a straight marital relationship.

Unfortunately though, this social crime does not just end with a homosexual man marrying a straight woman. Having spoken to homosexual people, it is yet another story of helplessness and grief. Most of them say that they are forced and pressurised by their families to get married. They don’t have the courage to tell their parents straight up for fear of ‘disgracing the family’. The result is – they live isolated lives.

Many people who have tried to open up to their friends and family members have come across things like “It is all in your head” or “it is a psychological problem and can be treated, don’t worry”. Many people are taken to various doctors and hakims to be ‘treated’, some are beaten for even thinking along those lines and others are emotionally blackmailed by their parents.  But like Sohail, described in case 3, despite having been through ‘treatment’ and being married to a woman, his sexual orientation remained the same.

In situations like this, it is the parents who need to come to terms with their child’s sexuality. They must not force their children to get married to people of the opposite sex to ‘save face’, they must not put their children on guilt trips or accuse them of ‘dishonouring’ them in society just because they refused a proposal.

When parents knowingly force their children to get married to members of the opposite sex, they are not only playing with the lives of their own children but with those of other people too. They may think it is worth a shot to get their children married and force them to have children, but what if the child’s sexual orientation remains the same despite having children? Is Sohail not our case in point? Why treat the girl he married like a guinea pig? I do not see why it is so hard to understand that she is not a lab test for your son’s sexuality!

Remaining in a state of denial will not help anyone. Talk to your children; find out how you can help. You are parents for crying out loud – don’t judge your own child!

*The names have been changed to protect identities.