Are we really going to blame India for the heatwave? 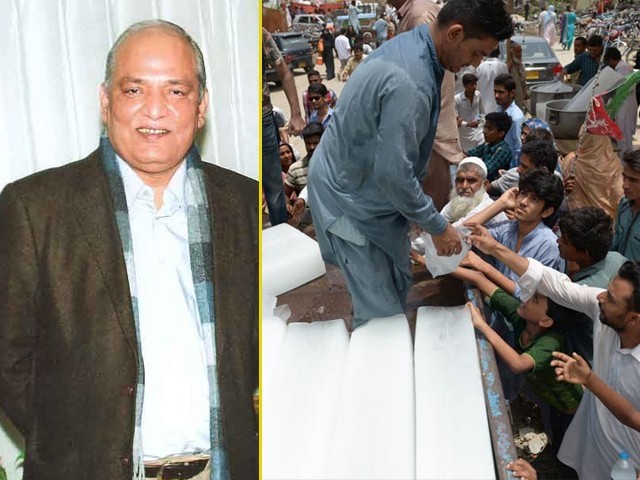 Pakistanis receive ice outside a hospital during heatwave in Karachi on June 24, 2015. A state of emergency was declared in hospital. PHOTO: AFP

The recent heat wave in Karachi that has claimed over a thousand lives is one more nail in our government’s coffin of negligence and its inability to deal with a crisis.

It has also become the norm in the subcontinent to give public officials the opportunity to show just how mind-numbingly dumb they really are.

In a recent statement, the Minister for Climate Change Senator Mushahidullah Khan has said that the actual responsibility for the heat wave lies with the boogie across the border, India. He claims that coal-powered plants in Rajasthan, India could have contributed to the heat wave.

The senator does not quote any scientific research to support his claim, and a quick look at his profile reveals that this is entirely unnecessary as Khan Sahab’s educational background in Law obviously makes him an expert on everything.

An official of the Pakistan Environment Protection Agency stated that,

“It will be easy to establish which direction the heat wave came from and where it was headed in the next few days.”

According to the official, we have technology available for that. One wonders why this ‘technology’ wasn’t used to predict the heat wave itself, especially after India experienced a similar environmental catastrophe in May that resulted in the death of more than 2,500 people. The Indian heat wave was attributed to changes in the monsoon weather system on which the entire region depends.

Would it have been too much to expect that the same thing might have happened here as well?

The good senator ignores the fact that his own party, the Pakistan Muslim League-Nawaz (PML-N), is a huge proponent of electricity from coal-powered stations.

An even bigger elephant in the room is the fact that our best friend in the whole wide world (at the moment), China, vastly relies on coal driven power plants. The country has, in fact, been the world largest producer of greenhouse gases since 2006. The emissions blame can, in fact, be laid at many quarters. This includes almost every human being who has benefited in some way from the industrial revolution.

But that is not how this game is played.

Our environment is at a tipping point. Temperatures have reached record extremes for both high and low temperatures; the sixth great extinction has begun.

We are running out of water.

We are running out of time.

We all share the same water and the same air.

Soot from China is carried across the Pacific to the United States. Medical waste from Africa washes up on the shores of the UK. Pakistan is no longer the rural idyll that it used to be.

Rapid urbanisation and deforestation has altered our immediate environment for the worse. The only solution to the crisis is for each country, each individual, to work, to salvage what little we still can of the Earth.

Preaching aside, government officials need to stop acting like they’re angels spun from light, incorruptible and incapable of mistake. We all know that Karachi’s dance of death was a long one.

Couldn’t the last 500, the last 300 or even the last 50 victims have been saved? We must expect more extreme weather events in the future. It won’t matter if the power plants in Rajasthan or Russia or Timbuktu are responsible, because if our government cannot manage a heat wave, threatening other countries with the UN will only be the punch-line in whatever new joke we manage to make of ourselves.