Punjab is Pakistan and Pakistan is Punjab 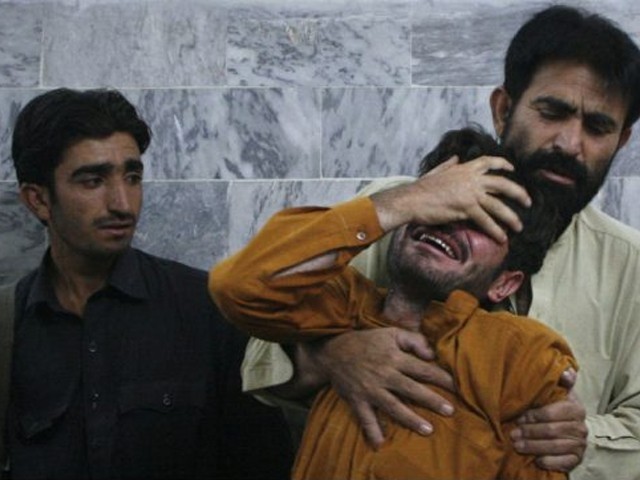 A man is comforted by his relative after he arrived at the local hospital in Quetta, Balochistan, Sept. 7, 2012. PHOTO: REUTERS

As 83 mutilated corpses are found in Balochistan, I further lose hope in our crumbling system and the state. A state which has failed its citizens over and over again.

Every man with an empty head and fickle mind is trying to formulate his own creed and ideology. It is tantamount to saying, in the presence of various man-made beliefs, that it is hard to follow one ideology with zeal and enthusiasm.

The case of Pakistan is verily the same. In Pakistan, people are blind followers of false narratives, whether enforced by the mighty army or by the corrupt and incompetent politicians. I pity the nation that is full of beliefs and empty of religion.

Here, religion is out-dated. Here, democracy is not what it’s meant to be. Here, the army has more of a political role than the politicians. Here, the sound of rattling guns is heavier than human voices. Here, elections are rigged. Here, the youth is voiceless and disfranchised. Here, laws are not for the poor and dispossessed segments of society. Here, man has no value and its fundamental rights are violated and suppressed. Here, law makers are not the real representatives of the man on the street. Here, the judiciary is a toothless tiger. Here, blood is cheaper than water. Here, the federation is fragile and is bound to experience a colossal collapse any time. Here, the politics of regionalism is at its pinnacle. Here, the so called journalists are blind to stories that matter. Here, the concept of peace and humanity are non-existent. Here, every man fends for himself. Here, women have no right to express themselves. Here, the concepts of racism and chauvinism run in our blood. Here, narrow mindedness and arrogance are our personal traits.

I do not believe in the way we are ‘progressing’ as a nation because this was never the way it was meant to be. It is not the path our forefathers wanted us to take. It is not the way of Muhammad Ali Jinnah and Allama Iqbal.

What I believe in is humanity, peace, progress, welfare, and the well-being of the masses. I believe in a strong federation with equal treatment of all its provinces.

Pakistan is a federal state with four provinces. Federalism is adopted in order to cope with the problems, but presently the federation is dominated by a single province. Punjab, the big brother is not only seen as a dominant actor the in army and the parliament, but is also in the bureaucracy and the judiciary.

Punjab is Pakistan and Pakistan is Punjab. This concept is a farce and it is a matter of grave concern. Balochistan, Sindh and Khyber Pakhtunkhwa, although existing, are voiceless, owing to Punjab’s mighty hand in all state affairs. The matter of fact is that politics of provincialism and separatism in present Pakistan are prevalent due to beliefs of our big brother. In Balochistan, hope is dwindling day by day because of the decisions taken by outsiders, without knowing the history, mind-set or culture of the locals.

Ardent supporters of guns and atom bombs have failed to bring the Baloch under the canopy of one central government. This is however, because of their unjust and exploitative policies over the past few decades. Unless and until, the military role is made obvious and implemented, there will continue to be bloodshed and more separatist movements will eventually emerge in Balochistan.

It is increasingly difficult to establish a strong Pakistani federation under the strong presence of the army in the realm of politics; a strong federation that will make people believe that it is possible to survive in this Pakistan with all our differences. To take pride in our diversity. To make Pakistan a confederation.

Clearly, our politicians and the military have learnt nothing from history. History is repeating itself today. Every peace loving Pakistani should know that the separation of Bengal was due to the rogue policies and rigid mind-set of a handful of people. People who thought they were more ‘Pakistani’ than the others.  Kahlil Jibran once said,

“Pity the nation whose statesman is a fox, whose philosopher is a juggler, and whose art is the art of patching and mimicking.”

I believe in democratic norms and values. I believe in fundamental rights, free and transparent elections, value of a vote, independence of the judiciary, and criticism and freedom of press. Under these present times, democracy is considered the real panacea to all the problems faced by modern man. Various totalitarian states are transforming into democratic ideals, owing to the people oriented values and virtues of democracy.

The case of the Middle East is the same. People there rejected dictatorial regimes and one man shows. They protested against the unjust policies of their mighty rulers and demanded fundamental rights. According to Francis Fukuyama, the world has achieved liberal democracy and it is the end of history. Democracy is the ultimate demand and desire of man in the universe and will ultimately heal all human suffering.

Democracy can be seen functioning successfully in western countries and in India as well. But in Pakistan, democracy is not performing according to the wishes of people. Here democracy is being used as a tool by corrupt politicians. This system has failed to amend the life of ordinary citizens.

In Pakistan, democracy exists as a label. Policies are made not in parliament, but somewhere on the side-lines. Here, political decisions are made under the shadow and presence of boots. Here, the military has castrated the civil institutions with the help of our submissive judiciary. Here, the press is only free on paper. Journalists are made to ignore the sufferings of the ordinary man. Here, the press is being used to propagate the state narratives rather than offering an olive branch.

For a mainstream journalist, all is well in Balochistan, but in reality, everything is rotten here and the people are depending on God’s mercy rather than the polluted system. Elections in Pakistan are rigged under the patronage of the army; the nexus of a few corrupt politicians, along with the military, don’t want a leader who will curtail their power or eventually hold them accountable.

How can we ever think of Pakistan turning into a strong democratic state if we carry on the same way? How can we think of a well-built federation if we have no right to elect our representatives? How can we dream of peace if the army remains the king maker? How can we hope Pakistan becomes a welfare nation if the budget of the army remains thrice the time higher than the budget for the common man? How can we think of a successful All Parties Conference (APC) when our army is the real leader of all our politicians? How can I hope for a peaceful, co- existent and prosperous Balochistan under the presence of state-made mercenaries and a proxy war? How can I believe in an army which has failed to protect our borders and is constantly living under the mercy of a blame game?

Democracy is only possible and successful if we push the army back to where they belong, the barracks. We can make Pakistan a real democratic state. A country that boasts of free and transparent elections, an independent judiciary, genuine  leadership in assemblies, a free press, provincial rights and bridging good relations with neighbouring countries.

Instead of making India the enemy, we should take a few tips from their democratic system. We must disown the state architected narratives that are no longer relevant.

I strongly believe in the power of the youth. Not the youth which is blindly following the constructed rogue narratives of the state, but the enlightened youth who believe in progress and peace. A majority of the population of Pakistan comprises of youth, but unfortunately the youth of Pakistan is not playing its due role. They lack creativity and zeal. They are acting at the beck and call of corrupt politicians and military generated propagandas. It is incumbent upon the youth to wake up and raise their voice against the corrupt system because the future is theirs.

I believe in humanity and the establishment of human relations more than that of the state. Humanity and the well-being of our masses should be of utmost importance, followed by the abstract concept of statehood. We should not dream of a powerful state by pushing its people aside. The state is meant to serve the people it encompasses. It is futile to think of progress and prosperity without recognising the value of humanity. In Pakistan, there are brutal institutions sucking the blood of it citizens dry.

Under the guise of state security, the military is getting away without a shred of accountability. A major chunk of the budget is allocated to serve the interests of a few generals, while others suffer due to their policies.  It is incumbent upon the intelligentsia and the enlightened youth to preach a valuable faith, free from pseudo narratives. Our law makers must not be from the GHQ but rather from amongst the people.

Our preacher should not be a puppet or counterfeited mullah, s/he should be an educated scholar. One must believe in Habib Jalib, rather than pseudo poets and intellects. The prevailing situation of Pakistan reminds me of another saying by Khalil Jibran,

“Pity the nation whose sages are dumb with years and whose strong men are yet in the cradle. Pity the nation divided into fragments, each fragment deeming itself a nation.”

The author is a gold medallist in the discipline of history, politics and literature from Government College University Lahore and is a former youth parliamentarian. He tweets as @rehaandashti