If Michelle Obama can do it, why not Reham Khan? 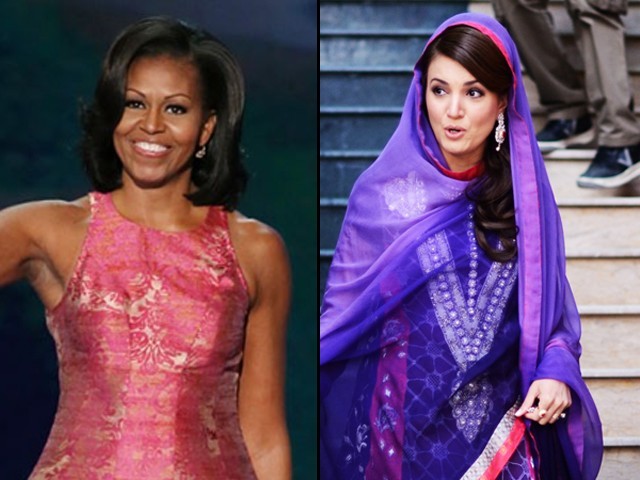 hat the women of the country would instead like to see is a greater, sustained and sincere involvement of the in-office first ladies in the social and cultural problems of the country.

The role of the First Lady in the US has continued to remain very prominent, active, and vocal over the years. It won’t be wrong to say that any national leader’s wife’s involvement with key social and cultural platforms helps to create positive vibes regarding his sincere commitment to the people who elected him.

Recently, First Lady Michelle Obama further strengthened her already strong ties with the community at large by supporting the ‘Let Girls Learn’ initiative that champions for the global education of girls.

Assuming a leading position in the educational campaign developed by the USAID, US Agency for International Development, Mrs Obama hopes to leverage US government investments for the education of 62 million uneducated girls around the world. In this position, her public speaking campaigns are targeted to encourage and support community sponsored solutions for girls’ education. Last week, Mrs Obama was on a visiting tour of Europe to speak for this long-term vision that she seeks to continue supporting even after her term as First Lady is over.

So how far do mere words go when it comes to displaying resolute support for a global objective such as girls’ education? A long way, if they come from an in-office First Lady. But then, one would argue, this is an easy task for the wife of the President of the United States or any other country. However, if it is indeed easy, then why is it such a big deal for the wives of Pakistani leaders? In other words, why are the Pakistani First Ladies never seen or heard of within this important parameter?

In comparison to a number of other countries, Pakistan has a myriad of worse issues than just education that could benefit astronomically from the support of its first ladies. But the country’s First Ladies are usually seen as mute, smiling, painted figures walking behind their husbands, the leaders of a country torn with cultural and social quandaries. Any argument that social and cultural norms create boundaries for Pakistani first ladies tends to fall lame since there are plenty of women very visible in the political arena in Pakistan.

So what stops them from assuming key roles in supporting causes that will only help increase public confidence in the leadership? Although there have been such figures in the past, in recent years, the role of the Pakistani First Lady has only dwindled into anonymity.

Sehba Musharraf, being the wife of an Army General, could have spearheaded such social and cultural initiatives but she didn’t quite fit the bill. When there was talk of her assuming a leadership role in any capacity at all, it was as a crutch to support Pervez Musharraf’s comeback to the country by leading the All Pakistan Muslim League (APML). In other words, it was for the benefit of politics rather than for any social cause. During Musharraf’s regime, Sehba’s role remained rudimentary and passive.

A handful of other Pakistani First Ladies can be picked out from history as working alongside their husbands. But even their roles mostly circled around the political benefit they could render to their husband’s party. For instance, Nusrat Bhutto worked for the empowerment of women and for the cause of democracy in Pakistan. Another name that springs to mind here is Rana Liaquat Ali Khan, a prominent stateswoman and economist who also worked under Muhammad Ali Jinnah. The first sister, rather than the First Lady, Fatima Ali Jinnah tops the list in this respect. Though Jinnah was not married, his sister Fatima Jinnah remained a stalwart of both his domestic and political life.

Although mostly in the context of providing structural political support to their husbands’ parties, these and many other examples still prove the dynamic role First Ladies can potentially play in increasing public confidence in the leadership.

Much contrary to the inconspicuous role of Pakistan’s First Ladies in the general social/cultural national scene in recent times, the role of ‘first children’, though more politically than socially, has nevertheless been prominent. From Benazir Bhutto, groomed under her father, to Bilawal Bhutto Zardari, Bakhtawar Bhutto Zardari, and Asifa Bhutto Zardari, and the Shahbaz and Nawaz Sharif progeny etc., they have all been primarily spruced and tidied up to assume key political positions.

However, this still fails to fill the vacuum created by the absence of a First Lady on the country’s social and cultural stage. Interestingly, Imran Khan seems to have put mind over matter in this regard. Assuming a possible future ascent to key leadership, he is already nudging Reham Khan into the position of his supportive right-hand. Although this start is more politically slanted at present, it may or may not turn into one of variant hues.

Banking on winning the Haripur re-election, Pakistan Tehreek-e-Insaf (PTI) has presented Reham as its candidate for that constituency. Since her marriage to Imran, Reham has discreetly increased speed in assuming a visible role in PTI. The Haripur move is well-planned since that is also the area of her maternal family, hence the strong vote-hold. But this move being political in nature will only help cement political groundwork for her husband. What the women of the country would instead like to see is a greater, sustained and sincere involvement of the in-office First Lady in the social and cultural problems of the country.

Pakistani politicians have relentlessly and unceasingly displayed a tiresome tendency to only talk about improving the plight of the common man and woman. But palpable results of such talk are yet to be seen. By expanding the role of First Ladies as champions of social and cultural causes alongside her husband, perhaps the Pakistani politician can garner more public confidence than he has been able to in the past.