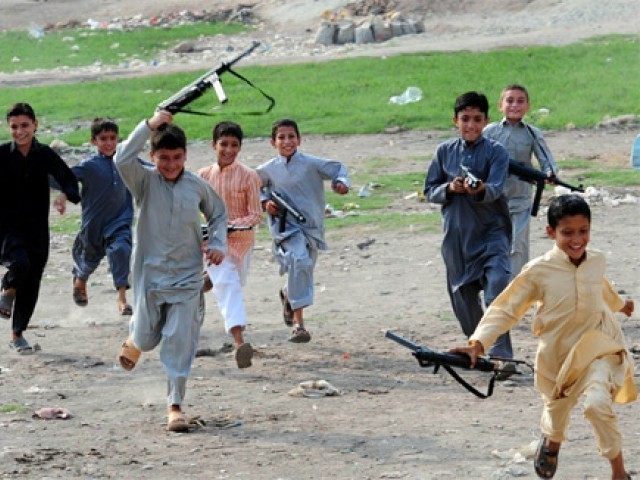 A couple of days ago, a SHO in Faisalabad, without giving any warning, shot two 14-year-old teenagers who were taking a selfie with a toy gun. One of the victims of that shooting died yesterday while the other is still hospitalised.

But this incident is not an isolated one.

Just a month back, in Daska, a SHO opened fire on unarmed lawyers, resulting in deaths of two lawyers and a pedestrian. The same SHO is said to have killed a detainee in police custody when he was posted in Malakwal and he still managed to keep his job.

Last year, the Lahore police killed 14 civilians in Model Town, and injured over a 100 others.

In 2012, an additional SP shot a 23-year-old unarmed boy over a parking row in Sargodha; the boy died on the spot.

There are countless other cases in which the police force has fired upon unarmed civilians resulting in the loss of human life. Needless to say, a majority of such cases have not been reported by the media because the media doesn’t have immediate access to remote areas of the country and usually the police officers manage to placate the families of the victims by using force and giving them blood money. For many, this makes reconciliation easy, as many of these families belong to lower-income backgrounds.

While violation of fundamental rights by the police is not a new phenomenon in Pakistan, cold-blooded murder of unarmed innocent citizens is certainly an extreme point on this graph. Alongside this, causing severe pain, violating the constitutionally-protected inviolable dignity of man, abduction, dispossessing ordinary citizens from their property and many other such crimes are a day-to-day routine of our police force. These crimes are also coupled with corruption that has somewhat been legalised in the department.  Meaning thereby that if a SHO doesn’t like your face, he’ll shoot you, or will publically thrash you, abduct you or formally arrest you and all you can do is bribe him to save your skin.

The police has recently banned the sale of toy guns in Multan and other areas of the district. But are toy guns really the issue here? No, they are not. Police officers with zero restraint over their actual guns are the problem. And the police seem adamant upon doing anything about it.

Police brutality is indeed the worst of all brutalities because the police are supposed to enforce laws and protect the life, liberty and property of the citizen. If the police fail to perform their duty then injustice prevails but if the police become a party to the violation of these rights, then there is sure chaos. And that is what this country is heading towards unless a step is taken to reform this institution.

In Pakistan, police reforms have been an election manifesto for almost all political parties. However, no substantial step has ever been taken by any civilian government to reform this force. The only step of substance was taken by the Musharraf government, which enforced the Police Order 2002. Through this legislation, the government introduced some necessary reforms. But the subsequent civilian governments have failed to implement it. In fact, Sindh and Balochistan scraped this legislation whereas in Punjab, the Shahbaz Sharif government has been indecisive about it for the last eight years.

The only issue that prevents democratic governments from bringing in police reforms is their desire to control the department. A professional police cannot be a personal police and if the transfers, postings and promotions are made while considering the professional competence of the officers, then who will bow before the mighty politicians?

The government, unfortunately, has failed to address this basic issue. The tyranny and injustice by these state institutions will only be tolerated to a certain extent, after which, the people will rise and take matters in their own hand – and when that happens, it will be total chaos.

Let’s hope that our government decides to do something about this issue before that happens.