Would I adopt this baby in five days, knowing the blood results? I’m not sure… 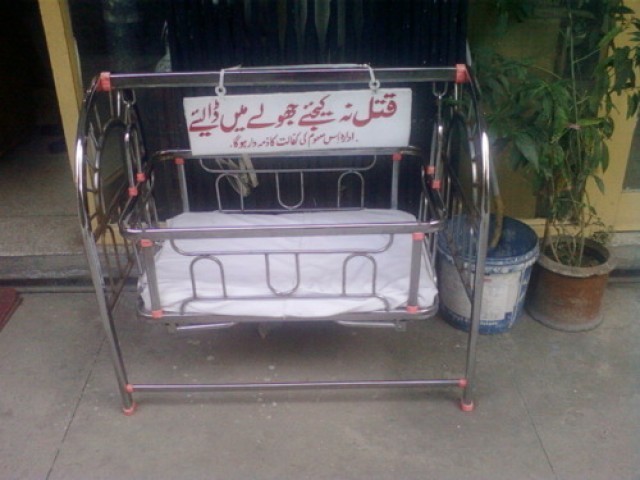 According to the Edhi Foundation, last year it rescued 110 such babies. Outside orphanages, the organisation leaves cots with signs above them which read “Do not kill your children, leave them here and we will care for them.” PHOTO: EDHI FOUNDATION

“If you ever had to adopt a baby, then whom would you settle for?”

This was the question I posed to myself recently. Not because I had to nor did I want to adopt a child. I have two of my own (biological ones, so my wife tells me), and they are more than a handful.

It all happened one fine morning in Karachi while I was working in the ER. A young couple had brought a two-day-old baby girl to me. The ER triages slip stated, ‘baby adopted’ as the reason for coming to the ER. I had never come across this as a presenting complaint in the ER, so my curiosity was piqued, irrespective of it still being the early moments of my ER shift without adequate caffeine in the system.

It turned out that the baby had been picked up half an hour before from an orphanage in Karachi. The baby had been delivered the day before, per the orphanage staff’s speculation, and she had then been left at the doorstep of the orphanage. Although babies being abandoned there might have been a normal occurrence for the staff, even contemplating that scenario was angst-ridden for me.

The above was the narrative that the adoptive parents had been given. The bottom line was that there were no pregnancy, labour and delivery records available; no information was there as to the location of delivery, i.e. whether hospital or home, although the latter was more likely. Furthermore, there was absolutely no biological family history available.

Initially, I had assumed that the parents were the adoptive ones, i.e. they had adopted the child. However, what was more fascinating and a tad bit alarming was that they had not gone through the entire process of adoption. Hence, I was unsure as to how to address the young couple; as adoptive or foster parents or merely as transient custodians?

The lady (adoptive mother), most likely figured the confusion written all across my face and stated,

“Doctor Sahab, we have been told that we can keep the baby for five days, have her tested and examined in any manner, but prior to that period ending, we are to make a decision.”

She said this in impeccable English. The young mother to be (or not to be) let her statement trail off and didn’t maintain eye contact as she said the last bit.

After a few seconds of uncomfortable silence that had descended, the father to be (or not to be) added,

“Doctor Sahab, we live in Los Angeles. We would like to have the blood drawn now and results available within the next two days. We don’t have enough time.”

I was tempted to ask the couple why they were contemplating adoption in the first place, moreover, why in Pakistan. I didn’t inquire because the ER seemed to be an inadequate place for gathering such information. It also occurred to me that I could refuse to send the blood tests as it certainly was not an emergency case.

However, given the novelty of the situation (from my perspective) and the fact that there weren’t many urgent or emergent children requiring my time, I agreed to examine the baby and send her blood work.

In spite of difficulty in remembering names, I inquire about every child’s name prior to starting a physical examination. This time was no different. I asked,

“Doctor Sahab, we don’t wish to get attached to this child within the five days period, in case we have to return her.”

This was all she said, and perhaps this was her explanation.

On examination, the baby was like any other normal two-day-old neonates that I had examined in the past. She was vigorous, pink all over, and sucking away at a pacifier. Her eyes were a remarkable greenish-grey in colour. Although babies that young are unable to focus very well, to me it seemed like she was looking at me right in the eyes. Somehow, I felt really connected to her. It might sound irrational, but right at that moment, I realised that I was silently praying for a good future home for her.

I forced myself to keep on track with the couple’s request for testing her blood. A few simple screening labs, including infectious disease-related ones, occurred to me. Reading my mind and perhaps disagreeing with my plan, the man took out a sheet from the folder he was holding and said,

“Doctor, this is the list of diseases that we would like the baby to be tested for.”

The list comprised of almost 60 diseases, several of which had exceedingly difficult names and were likely to be very rare. Methylmalonic or propionic acidemia, orotic aciduria, severe combined immunodeficiency, pyruvic dehydrogenase deficiency, familial hypercholesterolemia, and so on. Thus I stated,

“This list is quite illogical. We don’t have the expertise to test for most of these diseases. In fact, a lot of these can’t even be readily tested in the US. Last I checked, we are still a developing country.”

I couldn’t control that last sarcastic bit, although I had tried my best not to show my mounting frustration.

“Doctor, just do what you can then”, said the baby’s male custodian.

After the blood tests had been sent off, the family left, and I forgot the baby soon after as the ER became busy with genuinely critically sick kids requiring my attention.

A few days later, while reviewing laboratory reports, I came across a battery of blood tests that had been run on a single patient. It was the baby without a name. The identification given to her was ‘Baby Girl of Salma’, followed by a medical record number. Intriguing! Although the legal process of her adoption had not been completed by then, the baby had to be identified through the potential adoptive mother’s name, irrespective of her not wanting ‘attachment’ to the child at that stage.

Among the blood tests, there were two different Hepatitis B-related ones that caught my attention. One was positive and the other was negative. My analysis was that the latter highly sensitive and specific test made Hepatitis B in the baby unlikely.

Did the couple become parents to the baby? Did she get named? If so, what was it? Is she really without a Hepatitis B virus in her bloodstream?

I don’t know, as I never saw the baby or her custodian-parents again.

If I ever had to adopt a baby in five days, would I settle for this baby, knowing those blood test results?

I’m not sure, perhaps.

*The patient’s name, age and details of the event have been changed significantly hence any resemblance to someone real is purely coincidental.