“That crazy starving Muslim!” Why do Muslims fast, anyway? 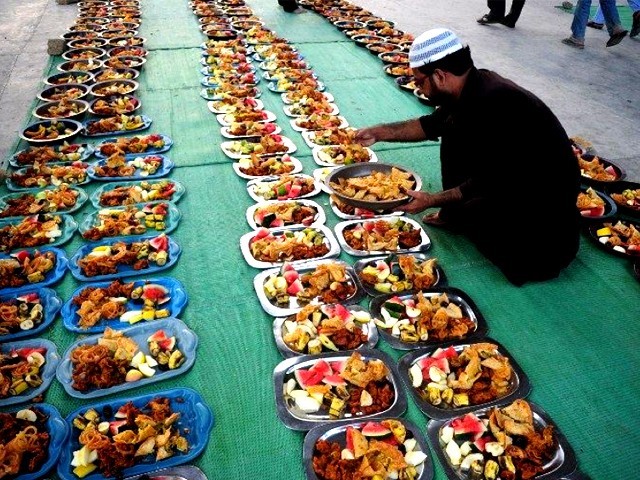 In Pakistan, a man arranges rows of food to prepare for Iftar. It is a common sight all over the world to see Muslims breaking fast together in mosques. PHOTO: AFP

When my Lithuanian classmate who sat next to me asked whether I wanted to have lunch one day, I explained to her that I was fasting as it was the month of Ramazan. She gave me a sarcastic smile and said,

“Well, you crazy people can starve all you want!”

On my way back home, I started thinking of how ‘crazy’ or ‘weird’ fasting could seem to some people, especially those whose lifestyle and culture are not familiar with this practice.

While trying to scrutinise my knowledge and trying to understand this further, I came to a painful realisation: I was not at all prepared to face a world that harbours so much ignorance about fasting.

Why had I been fasting all this while anyway? I had no solid answers.

So I studied, read, pondered and reflected.

I began confronting the truth.

Many Muslims do not really understand why they fast. If you pick any random Muslim on the street and ask, you might get one of the following answers:

2. People around (other Muslims) fast, so why wouldn’t I?

5. Without fasting, there’s no Eid. Bummer!

6. Just fast and stop asking. If I don’t fast, everyone will call me a bad Muslim.

Unfortunately, none of the above is true. These distorted ideas have been long propagated by some ignorant Muslim societies as a short cut to easily deal with those who question and avoid real discussions. Delving deeper into the subject, I discovered that God had answered my question 1400 years ago in Chapter 2 verse 183.

So the purposes of fasting were piety (God-consciousness) and righteousness. In simpler words, the objectives of fasting are first, to draw our hearts closer to God and second, to instil virtue, goodness and morality in us.

How can fasting make us closer to God, or teach goodness? Can’t we be religious and good without fasting? People who don’t fast aren’t necessarily bad, are they?

The real definition and practice of fasting extends beyond simply abstaining from food and drinks. Fasting also means self-restraint, from everything and anything that may displease God or go against the principles of decency. When we fast, we don’t eat or drink except at the right time, we don’t speak except for good words, we don’t perform except for beneficial deeds and we do not allow our hearts to be occupied by anything except for God, righteousness and all that is constructive.

Physically, fasting makes us hungry. Hunger makes one weak and vulnerable. Being in this condition reminds us that as humans, we are never self-sufficient and without continuous nourishment, we cannot survive.

Therefore, we are taught two things: that we are dependent on the constant need for a greater power, and how little gratitude we have shown all this while in the midst of enjoying the abundance of food. We eat and drink in abundance, but rarely thank the Provider. Often we waste, carelessly spend and spoil ourselves without any sense of guilt or responsibility, despite being aware that millions out there suffer from unimaginable hunger and poverty.

Fasting has other advantages as well. Scientists have long promoted this practice as a way of keeping the body healthy and young. In fact, many doctors say that the less you eat, the longer you live, and that occasional fasting has immense health benefits. It is also a known fact that numerous chronic diseases are caused by over-eating and unhealthy dietary patterns.

But hey, I am not interested in science as a way of proving the importance of fasting. My previous encounters with similar issues have taught me a good lesson – the Quran is a book of signs, not science. Living in a world ruled by scientific advancements does not make us obliged to always validate God’s rulings with science. If God’s commands are compatible with some scientific theories, I would rather take that as a sign of His infinite wisdom, and that the laws of nature surely have no choice but to be subservient to their Creator.

However, if they seem incompatible with each other, be mindful that science and all its theories are never absolute. They change from time to time. Scientists may declare today that a certain drug is the most effective treatment for a certain disease, only to find out 10 years later that it actually causes the body more harm than good. Similarly, who can guarantee that all the quantum physics theories will remain as they are 50 years from now?

When we fast, we are able to grasp the reality of hunger through first-hand experience. We feel the discomfort of a growling stomach and desperate craving for something delicious to pacify our tummies. We start imagining all kinds of delicious foods as sunset approaches. Does that remind us of someone, or something?

I flipped through a few magazines and discovered some shocking facts:

1. Roughly, 925 million people are afflicted by hunger, every day.

2. The world produces enough food for seven billion of its inhabitants, but hunger is still widespread.

4. Poverty is the principal cause of hunger.

5. The number of hungry grew in Africa over the period, from 175 million to 239 million, with nearly 20 million added in the last few years.

I closed my eyes and thought of all the innocent children who remain hungry day after day, having nothing left but their imagination of a possibly bright future, the gullible babies who are born underweight because the mothers have been undernourished, the toddlers who do not have enough to eat and succumb to simple, preventable diseases, men who starve in order to feed their wives and children and women who starve to make sure their babies are fed.

Had I not fasted, I would not have understood the difficulty and pain of hunger. People may know some facts and feel sorry for the needy, but genuine solidarity with the less fortunate can only be realised through experiencing the same harsh conditions that they grapple with on a daily basis.

One will not truly understand what it means to be a Palestinian living under siege in Gaza, until he stays there and sees for himself the daily oppression taking place.

One cannot grasp the fear and horror of Syrian children living in trapped districts where bombshells are dropped every few hours, until he goes through similar events.

The same applies to hunger and poverty. Unless we carry part of the burden on our shoulders, we will never understand the grief and torment of starvation and we will not fully digest the meaning of empathy.

Therefore, that is how morality and virtue is instilled through fasting. From now on, the sight of a beggar will not annoy me, for the month of Ramazan has given me professional training on what hunger is all about, and how to treat the needy. This holy month has infused the spirit of compassion and empathy in my soul. I now see the have-nots as my beloved equals, not a financial or societal burden as taught in many textbooks.

Upon understanding this beautiful ritual of fasting and the reason it is prescribed, I feel at ease. It is true that knowledge and understanding gives you the confidence and eloquence to face the world, no matter how ruthless or sceptical it might be towards Ramazan and the concept of fasting. The next time someone labels me ‘crazy’ for showing unity with the needy and hungry, I am more than ready with an answer. But before that, I will proudly say,

She is a medical practitioner currently doing general practice and is based in Kuala Lumpur. She obtained her MBBCh from Alexandria University, Egypt. She enjoys reading, writing, painting, calligraphy and doing social and humanitarian work nationally and internationally.