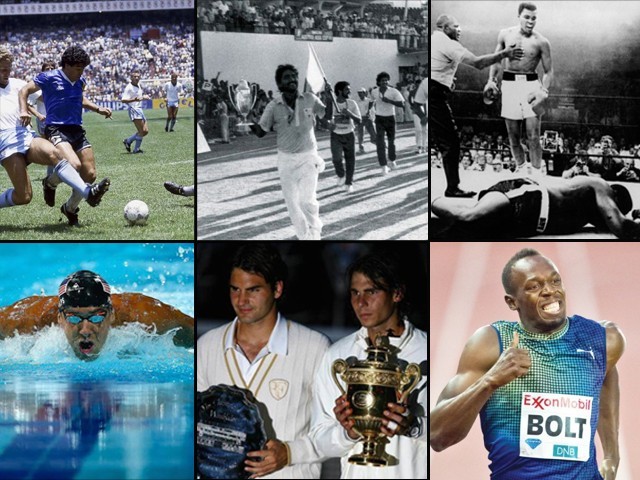 Every year, hundreds of sports events are held around the world, yet a very few moments among them linger on in our memories and eventually turn into classic moments we keep replaying in our minds.

Every year, hundreds of sports events are held around the world, yet a very few moments among them linger on in our memories and eventually turn into classic moments we keep replaying in our minds.

Here are 10 of the most irreplaceable flashes every sports fanatic can never erase from their memories:

Within five minutes of the second-half during the quarter-final match of the 1986 FIFA World Cup between England and Argentina, Diego Maradona gave the football world two of its most classic moments.

First, he scored the  famous ‘Hand of God’ goal as the result of an unnoticed handball, and four minutes later, he dodged six English players in his 10-second dash towards the English goal, to make the score 2–1. The goal was later dubbed as the ‘Goal of the Century’.

On February 6, 1988, Michael Jordan with his leaping ability, soared into basketball history with his jaw-dropping slam dunk from the free throw line during the slam dunk contest. Later his ‘air-ability’ earned him the nicknames like ‘Air Jordan’ and ‘His Airness’.

During the 2008 Beijing Summer Olympics, Michael Phelps from USA won eight gold medals, the record for the most medals won at a single Olympics. He also set seven new world records in the swimming arena. To date, Phelps is the most decorated Olympian with a total of 22 medals.

On April 18, 1986 , the cricketing world’s most ferocious arch rivals, Pakistan and India, were set against each other in the final of the Sharjah Cup. Four runs were required off the last ball, and due to Javed Miandad’s iconic sixer, Pakistan sailed towards victory.

5. The epic 2008 Wimbledon final between Roger Federer and Rafael Nadal

The 2008 Wimbledon Final between Roger Federer and Rafael Nadal featured one of the most competitive battles ever witnessed in the history of tennis. The match between the two lasted for four hours and 48 minutes , resulting in Nadal finally winning the cup.

6. The fight of the century – Muhammad Ali versus Sonny Liston

A year later, a second fight took place between the two which ended in about two minutes since Liston was declared  technically knocked out.

The one-inch punch is a punching exercise from Chinese martial arts (Kung fu) performed at a range of zero to six inches. It gained popularity when it was demonstrated by Bruce Lee at the Long Beach International Karate Championships in 1964. In the television show Mythbusters, the technique was tested quantitatively. The conventional punch measured 325 pounds of force while the one-inch punch measured 153 pounds.

On August 16, 2009, during the International Association of Athletics Federation (IAAF) World Championships in Berlin, Germany,  Usain Bolt  of Jamaica broke his own 100 metres record from 9.69 seconds to 9.58 seconds. He  is the first man to hold both the 100 metres and 200 metres world records and to win six Olympic gold medals in sprinting, and is also an eight-time World champion.

On October 18, 1968, during the Summer Olympics in Mexico City, Bob Beamon long-jumped 29 feet 2 inches to shatter the world record by more than two feet. The record stood for 23 years until Mike Powell broke it by only two inches in 1991.

On July 13, 1976, at the Montreal Olympics, 15-year-old Nadia Comaneci of Romania became the  first female gymnast to be awarded a perfect score of 10 in an Olympic gymnastics event. She won three Olympic gold medals at the 1976 Summer Olympics and two gold medals at the 1980 Summer Olympics in Moscow. In 2000, Comaneci was named as one of the ‘Athletes of the Century’ by the Laureus World Sports Academy.