Is PCB capable of hosting an IPL-level league in Pakistan? 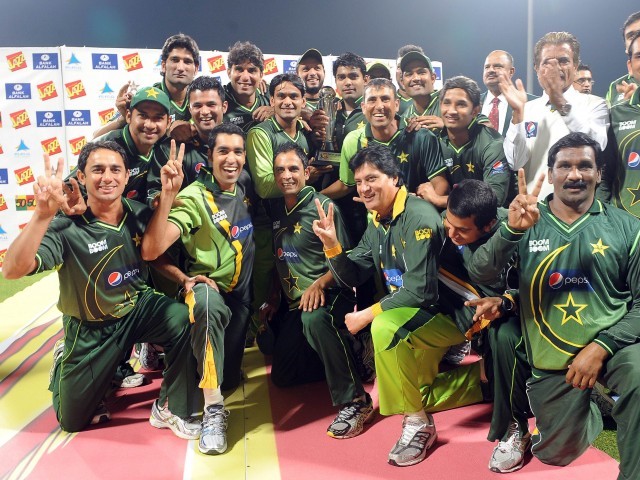 There’ll be nothing more delightful for Pakistani cricket fans who really miss their star players in the star studded IPL. PHOTO: AFP

While Nasim Ashraf sowed the seeds for Pakistan Super League (PSL) earlier in 2008, Zaka Ashraf watered them, and enabled them to grow further in January 2013. Not only that, he also spent millions of rupees to develop it. However, every time he would get closer to launching the league, something would go wrong and the dream of having Pakistan’s own league would shatter away.

This time, Najam Sethi and Shahryar Khan have revived plans of restructuring the league and launching it again in 2016. But this is being done without a concrete vision in mind.

There were quite a few serious steps taken initially, when the former Pakistan Cricket Board (PCB) boss, Zaka Ashraf was planning an Indian Premiere League-type T20 league in Pakistan.

Categories such as diamond, platinum, gold, and silver were established. The sponsors were named and the bids for imaginary franchises were also about to be revealed. The former International Cricket Council (ICC) chief Haroon Lorgat was hired as a consultant and Salman Sarwar Butt was hired as a managing director, and they were given huge salaries too.

Not only that, the panel – including Mike Procter as a match referee, umpires such as Rudi Koertzen, Russell Tiffin, Asad Rauf and Aleem Dar – was also announced.

The dream that Lorgat portrayed earlier, seemed fancy and not very different to what the current Board of Governors has disclosed. He said that the value of PSL could be in “excess of $100 million”. According to his plans, it was supposed to be a 15-day tournament, to be played between five teams at a single venue, involving a total of 23 matches for the first three years.

It all sounded great, but what happened to those ideas and plans?

Right after this plan came to the fore, the Professional Cricketers Association’s chief executive, Angus Porter, warned its players to not participate in such a league and advised the affiliated boards to refuse to issue Notice of Compliances (NOC) to its players. It only took a month and PCB postponed PSL on the basis of logistic issues.

“The delay was to give investors more time to submit bids and also to avoid scheduling conflicts with other cricket tournaments”.

But five days later, the managing director of PSL, Salman Sarwar Butt, stepped down and it became quite evident that the doors of PSL would be shut for quite a while. Later on, when Sethi took over, Nawaz Sharif sacked Ashraf as PCB chairman and PCB’s budget was announced, which revealed that the PCB was facing a huge financial crunch.

There was a shortfall of Rs70 crores (approximately $6.7 million) which the PCB was trying to cover up by initiating the PSL and Indo-Pak series, but unfortunately, India refused to share its revenue from the ODIs and the T20s, and PCB, despite investing millions of rupees, had to postpone PSL.

A few days back, I came across another story. Apparently PCB is planning to host the jinxed PSL project this winter and UAE has been chosen to host the league in order to “attract the maximum number of foreign players.”

Aims and promises are the same as Ashraf had made during his time, those of companies showing serious interests in bidding, millions pouring into Pakistan, and so on. Yet, PCB has nothing concrete to offer.

Some people are arguing over UAE being chosen as the host for the event, when we are talking about the revival of international cricket at home. Why did PCB go through the drama of calling the Zimbabwe cricket team? Are we still in doubt regarding the security situation in our country? Why are we using UAE as the launching pad to host our country’s first ever cricket league?

Confusions may further increase since PCB chose the window of February for this league, whereas another league named Masters Champions League, has already been scheduled in the same month and at the same venue. On top of all this, the UAE cricket organisers have reportedly said that they didn’t receive any official request by PCB for any league.

The irony is that the current PCB, which is planning to organise an IPL-level league, has never successfully hosted a single-international level domestic tournament. Take, for instance, the matches in our domestic season, such as, the Quaid-e-Azam Trophy, the President’s Trophy or the recently concluded Super Eight T20 Cup. The standard of these matches was so pathetic that none of the cricket fans want to watch these matches. The structure of our domestic cricket has been inconsistent, where revamping has occurred every two years over the last decade.

The upsetting fact is that 60 years since the first scheduled first-class season, Pakistan still does not know what system serves its purposes best because they have never stuck with one long enough.

Are we capable of conducting an IPL-level league? If one is expecting a sensible answer, it’s a big no.

The fact is that nothing is fixed in Pakistan. The much-hyped PSL was supposed to be held two years back but it was postponed indefinitely. Sethi took over as chairman PCB in May 2014 and was replaced by Shahryar Khan just after three months. PCB made headlines for scheduling an Indo-Pak series in December this year and soon the chairman of the cricket board announced plan ‘B’ to replace the series.

What if PCB issues a press release saying that the venue wasn’t available due to which we had to postpone PSL for another year? As we all know, there is no accountability in Pakistani cricket. I have a small request for the PCB management; if they have serious plans regarding the PSL, then they should work on it with serious intentions.

The PCB will have to change its mind-set and make an earnest effort to match the standards of the IPL, because it’s not an easy task. They should make it a policy that they’ll stick to their plans and preferably make efforts to hold the event in Pakistan, because if the dream of PSL turns out to be a reality, there’ll be nothing more delightful for Pakistani cricket fans, who really miss their star players in the star-studded IPL.