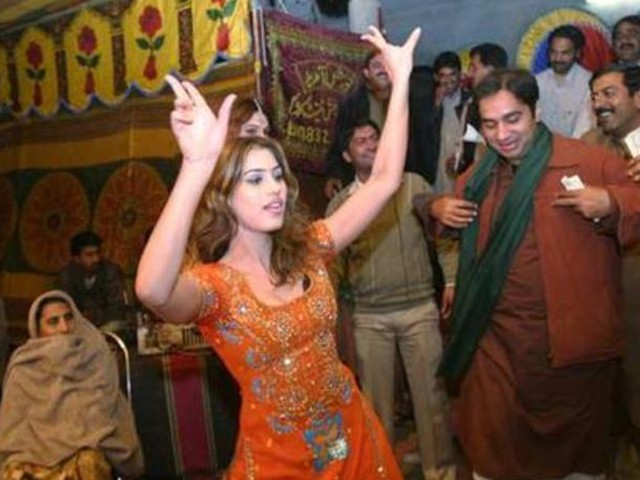 The reason they think they are the icons of the society, is the reactions of the 50 odd rows behind them. PHOTO: REUTERS

Right at the outset, let me apologise for this rant. I do not normally criticise or write negative reviews, but this time around, it just felt like I should say something on behalf of the common, harassed and saddened citizens. This ensuing blog is about a stage show on television, like the numerous we see regularly.

There is this lady and there is a lot of her. Most of it is showing. She is dressed in black and her smile never goes away. Around her are 20 young men, all dressed in white and they are all gawking at her. The lady stands out more than she is supposed to. She epitomises Venus and suddenly she starts cavorting. The 20 flunkies around her cavort back at her, while garish music plays in the background.

Suddenly, as the music changes its tone, the lady becomes still, the flunkies collapse to the floor, and out bound two scrawny looking break dancers, who somersault and have their 30 seconds of limelight. They are dressed in bright green, in order for the audience to differentiate them amongst the rest.

Shortly, the music changes again, the break dancers bound off and the dead flunkies come to life. The 30-second break has done them much good. They now make a determined effort to grab the lady in black. The lady is lifted by them and she contorts in their hands and her dress comes off, to reveal a skimpier silver coloured outfit. She smiles throughout and the music becomes a crescendo. Then it comes to a grinding halt. The lady stretches out her arms in ballerina fashion and strikes a pose to convey acclaim.

Down in the audience, the main act on the stage is not the real thing. The front row is packed with renowned faces. Most of these faces are stuck in a Botox smile, to be shown to the wider world. Behind the smiles, they are bored stiff and thinking what the hell, another evening uselessly spent. They have spent most of their working lives doing this, thus it comes to them naturally.

They are what you may call superstars and therefore any price is worth it. One of them wears a striped pyjama-type trouser and a hat, like The Great Gatsby. He has bound on to the stage a couple of times. It’s his desperate move to be noticed, as his last couple of movies have bombed at the box office. Anything to be noticed! They are apparently icons of the society, but in reality they are unstable, shallow humans, who have mastered the art of creating a facade.

The reason they think they are the icons of society is obvious by the reactions of the 50 odd rows behind them. These are the so-called lucky commoners, and by hook or crook, these people have obtained entry to this event. Some have sold their souls to get here, others have used influence and the rest have simply entered by paying exorbitant rates. They feel they have achieved nirvana. Tomorrow they shall boast about being there. Today, they gawk at the bigwigs, trying to get close and touch them. Some dance and cavort as the stage-show goes on. Others are whistling, clapping, and being altogether star struck.

It’s a sight to see, as the ones in the front row smile, look superior and condescending. The objective of their narrow existence is to be admired. They do not quite realise that their success depends on these gullible masses in the common rows. They are so used to adulation, that they are convinced they are God’s gift to mankind and will succeed regardless.

It’s called ego and arrogance. The whole wasteful, ridiculous, repetitive and decadent event goes on, as it has these last 12 years. Somehow, our masses don’t tire of this idiocy and the great unwashed laps it up one more evening.

Time to switch off the television and do something useful.