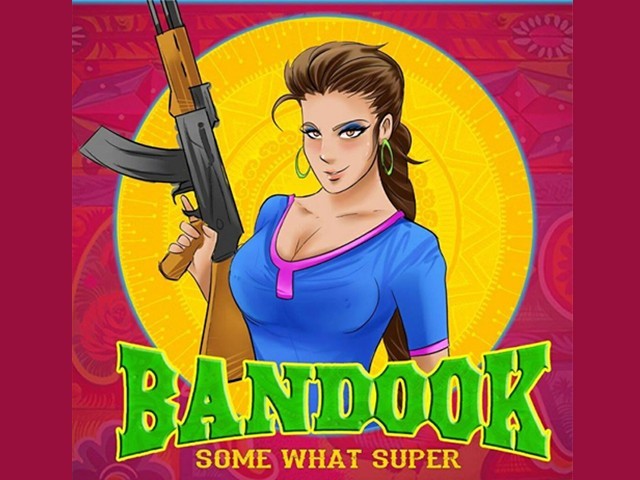 It was very similar for Bandook too, it took us two years to create the first half whereas the other half was done and finalised within 20 minutes. PHOTO: FACEBOOK PAGE

In the age of the cloud, things are progressing fast and people are accepting changes coming along with it. The internet has revolutionised not only the way we consume media, but also how the media infiltrates into our lives, and into the lives of the ones who control it.

Our music industry is witnessing a positive change, thanks to the internet, and new musicians with their creative music, are showing the world the amount of talent our country has. SomeWhatSuper is one such duo who recently came out with their single ‘Bandook’, a catchy dance track. But here’s the catch, it’s in Punjabi, which makes the track so much more interesting.

I recently got a chance to talk to Feroz and Talha, the voice behind SomeWhatSuper, about their experience of releasing and creating the track, and using the uber cool new music platform Patari to take things forth.

How did you guys come up with the lyrics to the song? What’s the story behind the lyrics? For me, it’s the lyrics which are the really catchy part of the song. What is the girl talking about? I don’t understand the Punjabi bit, so help us understand the song a bit.

The lyrics to the song were not just a random fluke; they were well thought out and were inspired by the research and experiment we did with our kind of music. Two years back, we bought a random sample pack off the internet. This sample pack had bonus vocals that later became the vocals of Bandook. The lyrics, ‘Tureya Tureya janda’ are from ‘Bajra Da Sitta’ whereas ‘Dukhan Di Roti’ is a Sufi poem by Shah Hussain. We call them ‘Tappay’.

A typical response to this might be that the lyrics are copied from Badshah, but these are a mix of two very old folk songs that inspired us to give it a twist with a genre of our interest and come up something phenomenal for our listeners out there. Initially, when we started on Bandook, we stopped working on it for a while, but the fact that we often found ourselves mumbling the addictive lyrics and tune gave us a signal to work on it and create something out of it.

The lyrics ‘Tureya Tureya Janda’ is where a girl is expressing how fragile her life is and the gun we have on our shoulder, we should be careful with that. The other part is the man, who is responding by saying that this is to feed my sadness, misery, and pain.

Why Punjabi? I understand that dubstep makes it something very catchy and appealing to the masses, but why did you decide to merge the two together?

Both of us belong to Punjabi families. People who do not belong to Punjabi families, even they are dazzled by the rich culture of Punjab. So the Punjabi background alone was enough to tempt us to work and experiment with Punjabi lyrics. Apart from this, we listen to Nusrat Fateh Ali Khan a lot. We listen to him musically and lyrically, and that is what signalled us to fuse (Punjabi and Electronic Dance Music) for good.

For us, this is not really dubstep; we call it the Moombahton style. Basically Moombahton can be referred to English bhangra beats, and to easily convert Moombahton to bhangra, the right instruments need to be selected and we did the same for Bandook. The result, although it took quite a while for us to understand the specifics and mechanics, can work for the lyrics we have selected.

Besides the Punjabi family background, we wanted to aim for the domestic music industry rather than going for the international industry. Our goal is to bridge the gap between the Pakistani music industry and its listeners, which is slowly dying. The bridging would not only revive it, but also establish a stable platform for others wanting to do the same.

How was the production experience and how did you decide that this is the sound you want to achieve with it?

The production process was not a simple one. It was difficult for us, as a team, to work things out and work our way through the lengthy and hectic process of production. The anticipation and interest kept us moving along.

We created around 20 demos for Bandook, but somehow failed to get the sound we wanted, until we worked on demo number 21. Even after that, we had to work on three more demos for the final product. We still have two different versions of Bandook. One is for user listening and the other is for us to play during our live performances. We have postponed the releasing of the other version for a while.

Things are very unpredictable when one is going through the production phase. You can never be sure how the final track, a demo or changes to a demo will turn out. It was very similar for Bandook too; it took us two years to create the first half whereas the other half was done and finalised within 20 minutes. We knew what we wanted the final sound to be, so it was easier for us to move forward with a clear direction. Producing our own music, when your laptops are your make shift studios is quite difficult, but the journey of Bandook was very stimulating for us.

The artwork, let’s talk about that. It’s just something really amazing. A bit raunchy and adventurous, were you conscious of what you wanted to achieve with the artwork of the single?

Being musicians, we appreciate art. It works as an inspiration, it can act as food for the soul or it can even complement the work we do. And that is why SomeWhatSuper and art go hand in hand.

For this specific cover, our friends Raza and Amar really helped us put together a fancy and catchy cover art work. We left it at their discretion and the cover took us by surprise. It is not only different and catchy, but completely complements what we have to offer to our listeners. It made our track a complete package, added to the unique element we were banking on, and added vitality to the entire Bandook story.

Have you heard it play in clubs, if that’s what you were going for with this single? What’s in store for the single and how do you plan to take it ahead and make it even bigger than it already is?

Aiming for the clubs was never on our list, especially when it comes to Bandook. For Bandook to become the ultimate summer anthem is what we had in our minds; we want people blasting their cars with this song. Many of our listeners and friends have sent us videos and Snapchats of people listening to Bandook in their cars or humming the tune.

To take this ahead, we have a lot more to offer but we are very concerned about how we should further progress while keeping the distinctive element people have started associating with SomeWhatSuper and the sounds we work on. Various tracks are in the pipeline right now. There are a lot of demos that need to be revisited and perfected for our listeners.

How did the collaboration with Patari come into being? Who reached out first? Do you think that this collaboration is worth it? Patari is making an effort to bringing Pakistani music to the mainstream in a streamlined manner, but what do you think of it?

Initially, it was us who approached and shared our work with the Patari team. We got a response from Khalid Bajwa immediately and he was super excited about Bandook. He pitched a plan to take it forward through his platform of Patari. We left it entirely up to him on how he wants to promote the track.

The response and feedback we got through Patari was very insightful and motivating on how we should take this forward from here. It’s been a month or so since the track was launched on Patari, we already have 20,000 hits. We are ranked as number one on their charts.

I think we were very lucky to be going live with Bandook the same time Patari is growing too. We hopped on to the bandwagon. As Patari grows, we have a more promising platform to come forward to and we get a chance to grow with it as well. It is an amazing venture for the Pakistani music industry which will further expand the horizon of opportunities for all the music lovers, listeners and musicians out there.

What were the musical influences behind this track? I see great potential in one single, but what do you as a band have in mind?

Bandook was not an instantaneous thing; there is no such story behind it to tell. There were instances where it hit us what we want to do to with the track and the production process was steered by us accordingly.

We are an electronic group and we don’t really work as a band. Although one of us is a guitarist and the other a drummer, we bring our own specialities and expertise to the table and work together as any other electronic group does.

We work from our laptops, collaborate, and keep on polishing it until we like what we hear. During this process, we share the raw demos with a few selected friends, which mostly bring in negative feedback or laughter.

We are currently working on four different types of tracks, where two of them are affiliated with one of the biggest names from the music industry. Our next track is completely different from Bandook. We like to experiment with stuff. We will not stick to a single sound or a single genre. Apart from this, SomeWhatSuper is also working on a 30-minute non-stop mix of a kind that has never been done before. This comes out right after Eid, followed by going live with other projects in the pipeline. The year 2015 has already started well for us and going by the plans we have, we see it ending even bigger for us as well as the music industry we cater to.

It’s evident how hard working and enthusiastic this generation of musicians is when it comes to their work. It is not just about creating commercial music, but also about innovation, collaborations, and having fun.

With Patari, the music industry might see the change it desperately needs. Young musicians are worth trusting and giving a chance to because they are the beacons of hope for the future. And we only wish they help our music industry grow, and create interesting things as SomeWhatSuper are doing.