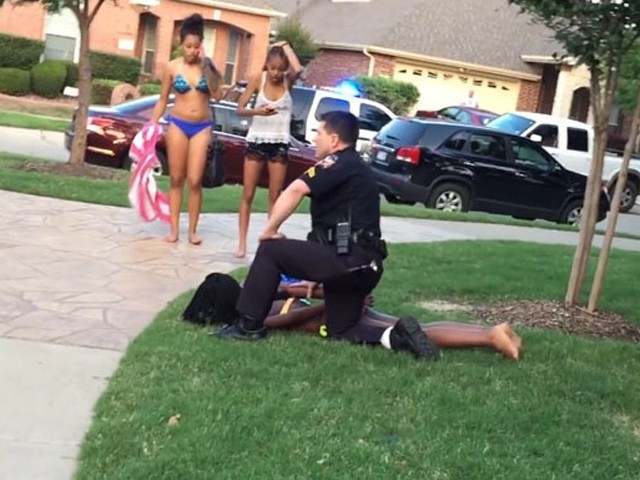 A screengrab of a video shows McKinney, Texas, police Officer Eric Casebolt restraining a 14-year-old girl after a pool party.

Over the past several years, there appears to be a rise in the instances of horrid brutalities, and murders, carried out by police officers, in the name of justice and safety enforcement, where Americans – mainly African-American and other people of colour – have been targeted, terrorised, and treated with much disdain and disrespect. And most, if not all, of these victims have not only been innocent of the crimes that they had been accused of, but they were also unarmed.

Nevertheless, the latest of such staggering police brutality occurred last Friday, where police officers arrived at the Craig Ranch Community Pool in McKinney, Texas, after they were informed that “a group of black teenagers were causing disturbance, did not live in the area, and were refusing to leave”.

The viral video that materialised over this past weekend showed the police officers angrily addressing the teenagers, terrorising and handcuffing them, despite them having done nothing wrong. The incident that was most disturbing to watch was when one police officer forcefully grabbed a young 15-year-old African-American girl by the arm and violently threw her to the ground by the hair, and then pulled out a gun, threatening to shoot anyone who tried to come in her defence. The injustice that was being done to these kids was just unbearable to watch, and I admit, it drove me to tears.

Watching that video made me realise that no matter where they go, or where they come from, African-American– whether old or young – will always be seen with much scrutiny and contempt, as were those teenagers who happened to be innocently enjoying themselves in a supposedly ‘high-end’ neighbourhood community pool. The general notion is that African-American people are not supposed to live or even be in such neighbourhoods, because they belong in the ‘projects’ or areas where the crime rates are high. And while it’s disgusting that such views exist in this day and age, it’s a view that many people still strongly uphold, as Tatiana Rhodes – the young 19-year-old girl who was hosting the pool party – stated,

“This lady was saying racial slurs to some friends that came to the cookout. She was saying such things as ‘black effer’ and ‘that’s why you live in Section 8 homes’.”

There is also the general notion that if you see a group of young African-American kids, whether it is on the streets or at a community pool, it must mean that they are up to no good; rarely will they be viewed as innocent human beings who are having fun, as would be the typical case if these teenagers were white.

Why? Because African-American kids are supposed to be a nuisance. They are supposed to wreak havoc. And most are seen to grow-up and become criminals, save a few “lucky” ones. Sadly, this is something that many young African-American kids learn to internalise as well – that they will always be seen as a potential criminal, in the eyes of society, even if they try so hard to be “good”.

It has been nearly a hundred years since the Emancipation Proclamation, and African-American people in America are still facing a plethora of discrimination, oppression, and injustice, including racial violence, not only within the communities in which they live, but also from the law, which is supposed to be just and equal.

African-American leaders like Martin Luther King Jr., Rosa Parks, Malcolm X, and a few others, who risked their lives in the name of freedom and equality, would not at all be happy to see that their vision has not fully succeeded. As a matter of fact, it has failed. For, very unfortunately, racism is still rampant, and stereotypes still exist and are deeply embedded, both within the society and the state.

The problem further exacerbates when police officers, who indulge in such inhumane brutalities are hardly held responsible for abusing, threatening, and even killing innocent or unarmed African-Americans as well as other people of colour. Most are either acquitted or seen as not guilty for killing whom they believed to be a “criminal”.

It’s no wonder we have Twitter hashtags like #BlackLivesMatter – it’s because people have repeatedly been told that African-American lives don’t matter, and whatever happens to them is only because they ‘deserved it’ and not because the police officers and the justice system as a whole was in the wrong.

We need to realise that the problem isn’t that there are just a few ‘bad’ and ‘good’ cops; the problem is deeper than that, much deeper. It’s the way these police officers are trained, the things they are taught, and how they should address certain people, including visible minorities and people of colour. The reality is that during training, police officers are taught to treat African-Americans and people of colour with the most brutality, like as if they are trying to annihilate a mortal enemy. This is the root of the problem – ignorance and further teaching ignorance. It’s a destructive cycle.

Black lives do matter, and someone needs to take responsibility for the state of policing and the ways in which police officers discriminate against and treat people of colour. And if the government doesn’t take action, we can be rest assured that its citizens certainly will.

Let’s just hope no more such despicable police brutalities and murders take place until that happens.