Blind the Kashmiri protesters: A new tactic employed by India 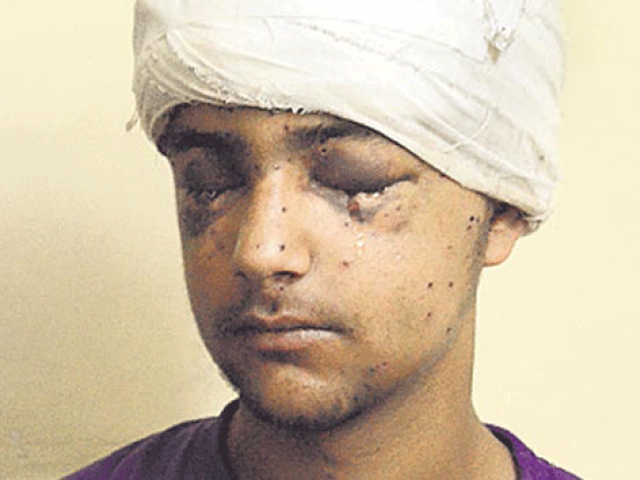 Hamid became a victim of the indiscriminate firing of pellets by the Indian occupation forces, blinding his right eye permanently, while the vision of his left eye remains uncertain. PHOTO: HINDUSTAN TIMES

This is the story of a teenager. His face is disfigured. One eye is lost forever. I have not spoken to him in person since he is lying in a bed in New Delhi, while I sit and write this in Islamabad. But if you see his face the way I saw it when his story broke, you will not be able to forget it. And you will begin following his story updates more vehemently.

He should not have lost his eye. Who loses an eye for carrying a placard, shouting slogans, and partaking in a peaceful protest for a political cause? I often do the same in Islamabad. I did it recently for Sabeen Mahmud after her brutal murder, raising her picture with colleagues at the National Press Club.

But Hamid Nazir Bhat, a 16-year-old resident of Palhalan District, Indian-occupied Kashmir, was not as lucky as I am, or as most citizens of democracies are.

On the afternoon of May 21st 2015, the day his world turned dark forever, Hamid was on his way to attend a tuition class. On the way, he came across a peaceful protest. He probably thought of joining it for a few minutes. Or maybe he didn’t and just happened to be a passer-by. But out of nowhere came these pellets—speedy fast, iron-clad and piercing.

Pellets are small pieces of iron, the size of ball bearings. Law enforcement agencies use mild forms of these things to control crowds. However, unfortunately for Hamid, India’s military and occupation police in Kashmir use a hardened form of pellets, and their use is now a common practice in Kashmir, where the Indian military personnel routinely fire them at protesters. Nearly 700 Kashmiris have received pellet-related injuries, minor as well as severe, since mass protests broke out in 2010.

Rights activists have advised the occupation administration and the Indian army to use the number nine pellet for controlling crowds as it does not cause long lasting damage; however, the forces routinely use number six and seven pellets. It is noteworthy that one cartridge contains around 400-500 pellets. The Indian occupation forces in the valley have been using these pellets extensively since 2010, and figures provided by the Government of India, which micromanages everyday issues in Kashmir, state that since 2010, 200 people have lost their eyesight. Independent sources, however, insist the figure is actually close to 700. Human rights organisations such as Amnesty International have already asked India to stop the use of pellets.

Hamid became a victim of the indiscriminate firing of pellets by the Indian occupation forces, blinding his right eye permanently, while the vision of his left eye remains uncertain. If this was not enough, the pellets pierced his skull, bones, jaw, lips, and nose as well.

This particular case drew severe criticism towards the Indian administration in Kashmir. A ‘minister’ in the Indian installed government, Asiya Naqash, visited the boy in Srinagar hospital immediately after the attack. The boy was treated at Jhelum Valley College of Medical Sciences and was later taken to Sher-e-Kashmir Institute of Medical Sciences in Srinagar. The father of the boy was not satisfied with the treatment in Kashmir and airlifted his son to India.

Hamid’s father is a carpet weaver and cannot afford specialised expensive treatment, but he is ready to take on a loan for the sake of his child’s future. Interestingly, the Indian government, its army, and its proxy government in Kashmir failed to offer any financial or medical assistance to the boy and his poor family.

The May 21st event was peaceful, but it turned chaotic towards the end when the Indian occupation army opened fire to forcibly disperse the seemingly peaceful crowd. It was a nonviolent protest against the Indian military presence in Raipora Palhalan, District Baramulla. The activity included sloganeering and carrying placards.

What was the response of the Indian-occupation police?

Here is the report of The Hindu, one of India’s largest daily newspapers, posted on May 25th, 2015, titled, Police Pellets Blind a Kashmir Teen,

“Hamid Nazir Bhat, 16, has lost vision in his right eye pierced by pellets, and nearly a hundred of these tiny iron balls have pierced his skull, jaws, lips, nose, and brain. The police fired them during a protest in his village, Palhalan, in north Kashmir on Thursday”.

A doctor treating the teenager said more than a 100 pellets pierced his skull.

The high-velocity pellets caused a vitreous haemorrhage in the right eye, and now his left eye holds out the only hope. Waseem Rashid, an ophthalmologist at Sher-i-Kashmir Institute of Medical Sciences, Bemina, told The Hindu.

“He had a corneal-limbal tear in the right eye, and we operated on it on Saturday. But he has no vision in it, and it seems he will not able to see with that eye again,” said the doctor.

This might come off as morbid, but pellet-related injuries in Kashmir have led to the flourishing of the cosmetic surgery business in India, especially for cases coming in from Kashmir. A large number of families, mostly the poor, are forced to travel to India, the only country they can access for treatment, only after selling their valuables. Many Indian doctors and investors have set up profitable businesses in Indian regions near Kashmir, where severe cases of injuries from iron pellets used by the Indian paramilitary are treated.

India is trying to crush the nonviolent indigenous freedom movement of Kashmiris. Indian commanders have apparently concluded that the best way to do this is by targeting young Kashmiri men, who fuel Kashmiri resistance through political organisation and action.

Sadly, New Delhi is ignoring the shift noticed amongst Kashmiris; the trend is shifting from armed resistance to peaceful and unarmed political protest. The reaction of Indian-occupation troops in Kashmir to any form of Kashmiri peaceful protest is as violent as it would be, regardless if Kashmiris are armed or unarmed.

She is a HR activist, and an international lobbyist at Youth Forum for Kashmir. She has addressed UN Human Rights Council twice on Kashmir. She has researched extensively on EU-Pak strategic relations as well. She tweets as @MariahAtiq (twitter.com/MariahAtiq)