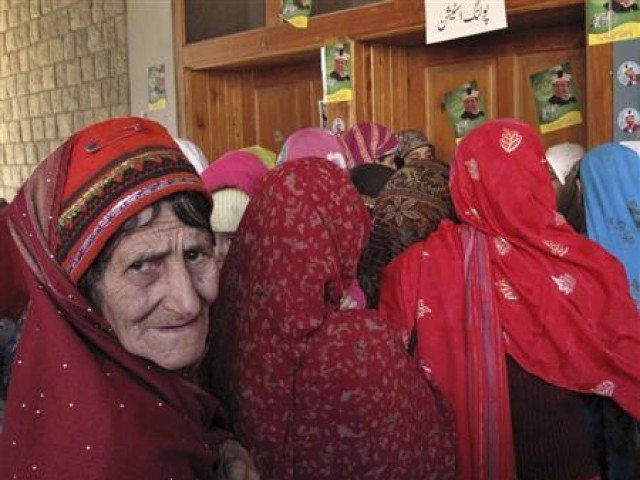 A woman stands in a queue to cast her vote during an election of the Legislative assembly for Northern Areas in Gilgit-Baltistan. PHOTO: REUTERS

During a chat with a local, who in his opinion, highlights the major causes and precursors (whether correct or not) of the shift in trend of the traditional voters in Gilgit-Baltistan.

“Doctor sahib, I am outside waiting for you, no one else turned in today.”

Askari (name changed), is around 50-years-old and is a van driver from my company. He belongs to the Gilgit-Baltistan area and has characteristic facial features of a Balti.

As I stood up, switching off the news being aired, the last few remarks I heard were from Syed Mehdi Shah of Pakistan People’s Party (PPP), citing one of the reasons that he thought was a precursor of their defeat in the current elections.

“This time around, the religious parties played their cards well like Majlis Wahdat-e-Muslimeen (MWM) and…”

“But you weren’t even second placed in this election, after ruling and governing the area for so many years”, interrupted the anchor.

“Well they (government) installed a governor that they should not have done and it was done in an undemocratic way. He already did 15 days back what he was being brought for into the fold.”

As I sat beside my driver in the empty van, I knew what the topic of conversation would be during the entire journey to the office on the crowded roads of Karachi – politics, one thing we should generally not talk about.

Before I could even start, Askari had a grin on his face and a light in his otherwise old eyes, suggestive of triumph. He said,

(Elections are already completed there.)

For the ease of readers, I will narrate the rest of the conversation that took place between us in English.

“Yes Askari, I heard that Pakistan Muslim League-Nawaz (PML-N) is emerging as a winner there”, I said.

“Well Mehdi Shah lost. We loved PPP and it’s Asif Ali Zardari who was the reason of the defeat. There hasn’t been any development since he came onto the scene,” he said.

“But I heard Mehdi Shah saying that it was the Shias who triggered his defeat”, I narrated from the TV show.

“What the hell? Isn’t he a Shia himself?” Askari, a follower of the same faith, pounced on to what I said.

“No sorry, I meant he said that the religious parties in this election cut PPP’s share of seats and votes as well,” I instantly clarified.

“Yes. That’s right. But PPP should know why a loyal voter for generations as well as commoners dwelling amongst all the atrocities was still voting for PPP. And why this time around that’s not the case.”

“Zardari’s PPP is doing nothing there. PPP was supposed to be a Shia party, but years back, during Muharram, blasts took place during Muharram processions and no one cared. Instead, a dozen of mourners were taken into custody. Yes, they were involved in minor stealing cases subsequent to the explosion, which was wrong, but what were the circumstances that propelled them into committing these shameful acts?”

“Dr Sahib, we love Zulfikar Ali Bhutto and his daughter. The night Bhutto died everyone back there cried like it was Ashura. It was a Shaam-e-Ghariban for us. How old were you when he was hanged by Ziaul Haq?” he threw the question at me.

I somewhat felt embarrassed of the lack of being there during ‘that’ time.

“Well, then you really know nothing,” he said.

He tightened his grip around the steering, which somewhat reflected on him taking the driving seat in our short conversation as well.

“During my teens, Bhutto came to our area. He stood with us and ate what we were eating back then. Standing amongst us, he showed his disbelief and even cried for us. He then held a handful of wheat in one hand and remarked that this is what you will eat from now on,” he continued.

I could tell Askari’s eyes were welling up.

“Since then a ration card was issued to every family which allowed them 10 kilograms of wheat and one kilogram of sugar per person. I can easily recall when the shipment for wheat and sugar would arrive in our area and it would be heaped outside. As a kid, I would make my way through the people and sneak a fist full of sugar, run away from the scene and enjoy it under shade of a tree. It would be like Eid for me. Sometimes, I would do it twice or even thrice.

This ration card was continued till Bhutto was hanged. The night we all cried. Everyone was so loyal, obliged and indebted to him for his generosities that they continued loving and voting for his daughter.  Her husband, however, ensured that no developmental work continued in our area during her tenure, unlike Bhutto who coerced the Chinese to build roads.

Not even a single road was developed in the past five years. None of the previous roads were maintained or widened for that matter. Mehdi Shah, himself, owns a couple of dozen shops in the main Skardu market, renting them out and easily earning four to five hundred thousand, as I have heard,” Askari explained.

I inquired from Askari regarding where he lives as I suddenly realised that this could be a very good discussion to pen down for the readers, what an average local voter bases his decisions on when he goes to cast his vote and how he thinks, regardless of the authenticity of the facts he comes across.

“I lived in Kharmang Valley, it is around a 90-minute drive from Skardu while going towards Kargil,” he further continued with the description of his area and adjoining areas north of Skardu.

“You see Dr Sahib, we don’t like Nawaz Sharif, but even if he fulfils half of the 10 to 12 promises he has made to us, then he will win the following elections as well. As compared to the last four to five years, he is likely to do something at least, anything at all.”

“So what else can you recall about Bhutto?” I cunningly inquired to take out more of whatever he believed in and was being told till now.

“The trees along the roadside were being marked by the government authorities.  Those were considered to be government property. We were allowed to have fruit that would drop from it, but could not harvest or cut it down. Bhutto stopped that practice. He ensured that in the future, no trees are marked that way and people would be allowed to cut those at will,” Askari’s face beamed as he could recall the triumph again.

The author is a Physician, health care leader, and a seasoned writer for local English newspapers and blogs. He tweets as @Ali_Shahid82

Should office timings be changed during Ramazan?