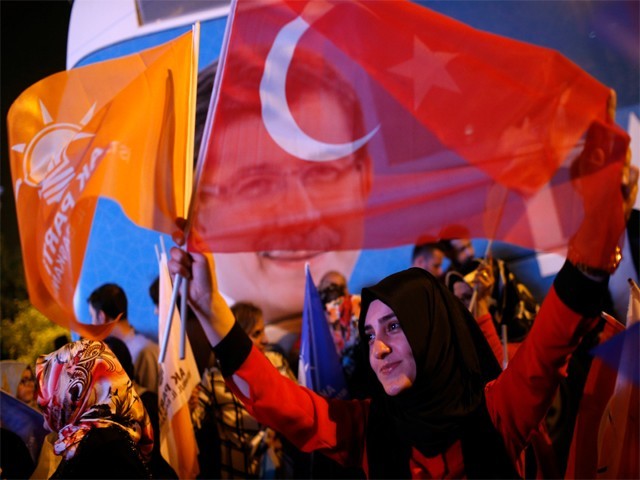 The 24th general elections of the Republic of Turkey were held on June 7, 2015, to elect 550 members of the Grand National Assembly. The election left many surprised as it resulted in the first hung parliament in Turkey since 1999.

However, from a purely Pakistani perspective, there are many lessons to draw, some which have been mentioned here:

1) The ruling party should not be over-confident

The Justice and Development Party (AKP) has governed Turkey since 2002 and won its fourth consecutive election this time. However, it lost its parliamentary majority as its total seats dropped from 311 to 258. Thus AKP, despite winning the elections failed miserably to meet President Tayyip Erdoğan’s ambitious target of getting 400 MPs elected.

There has been a visible decline in the popularity of top political parties. The Republican People’s Party (CHP) remained the second largest party, but slipped below. On the contrary, minor parties showed significant improvement. Nationalist Movement Party (MHP) and Kurdish-supported Peoples’ Democratic Party (HDP) unexpectedly won 80 seats each.

Lesson: Minor political parties can have significant local support due to various affiliations and hence need to be taken seriously for any possible alliance in future.

3) Infrastructural spending is not a recipe for success

From 2002 to 2012, under AKP’s rule, Turkey saw huge infrastructural development. The number of universities increased from 98 to 186. The total length of paved roads and highways constructed in last 10 years exceeds 13, 000 kilometres and a total of 24 airports were also constructed during the same period.

Lesson: Infrastructural development might be an important tool for gaining public support but there is no guarantee that it will translate into votes.

For the first time since the establishment of the Grand National Assembly, a total of 97 women have been elected as MPs in Turkey.This means women will roughly form one-fifth of the Turkish parliament, which is an impressive achievement.

Lesson: Although in Pakistan significant steps towards women empowerment have been taken through reserved seats  in the parliament, yet more measures need to be taken in highlighting the equality of women.

In 2014, during the presidential elections, Turkish nationals living abroad were allowed the right to vote. In recent elections, the votes from the Turk diaspora in Germany, France and other European countries played a critical role in the formation of the 2015 Parliament.

Lesson: In Pakistan, overseas Pakistanis should also be allowed to be a part of the electoral process and cast their votes.

A prominent reason for AKP’s comparative downfall can be attributed greatly to its harsh media policy. During its last decade, Turkey’s ranking in the Press Freedom Index has dropped from 100 to 149. According to sources, till date, 63 journalists have been sentenced to almost 32 years in prison.

Lesson: In the era of information, such practices are a sure-shot attempt for political suicide.

The Gülen Movement in Turkey is a religious and social movement led by Islamic scholar Fethullah Gülen. The movement has initiated forums for interfaith dialogues. Some have praised the movement as an alternative to more extreme schools of Islam such as Salafism. The movement has a significant following; AKP lost its support from the Gullen Movement in recent years due to various reasons – which led to them losing their majority in the Parliament.

Lesson: In Pakistan, religious parties operating under political or social umbrellas can help make or break a mainstream political party.

8) Regional grievances need to be addressed

One of the sore point for any Turkish government is the dispute of Kurdistan in Southeast Turkey which has so far resulted in about 40,000 deaths. In this regard, AKP has few successes to its credit. Kurdish was incorporated as a national language and the development budget for the region was significantly increased, but it did not help much.

Lesson: Issues revolving around regions such as, Balochistan, Gilgit-Baltistan, Southern Punjab, Interior Sindh and tribal areas need to be addressed to strengthen the federation.

Over the last few years, Turkey’s foreign policies have been noteworthy, which has been one of AKP’s strong suits. Most remarkably, despite maintaining diplomatic relations with Israel, it has shown overt support for the Palestinian cause. Similarly, Turkey under AKP government has raised concern on the military coup in Egypt on overthrowing of a democratically-elected government.

Lesson: Doubt or indecisiveness in foreign policy damages the credibility of an elected government and this can have a significant bearing on future elections.

10) Desperate attempts for “change” without support

AKP has strongly campaigned to write a new constitution to bolster the powers of the country’s presidential office. It needed at least 330 seats to unilaterally initiate such a change. All the other three main parties are against a presidential system. With the recent loss of a clear majority, hope for the emergence of a presidential system in Turkey is gradually fading.

Lesson: It is pragmatic to build a coalition to mark a lasting political change in the adventure of elections.

Turkey is one of the most successful modern democracies. Since Pakistan shares a special relationship with Turkey and its people, it is important we pay heed to the lessons Turkey’s General Election 2015 has to teach us.