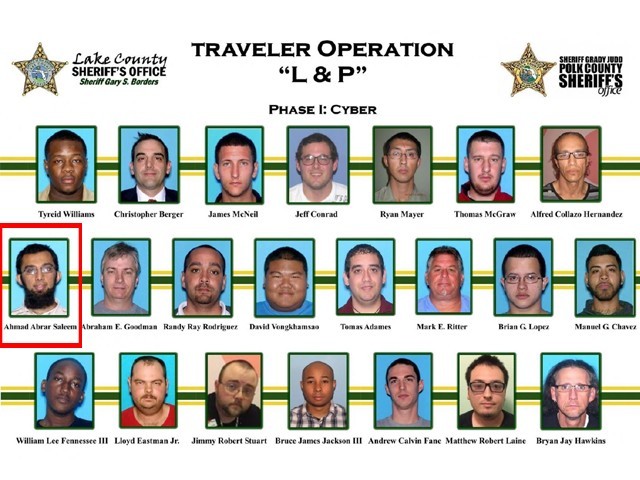 This week, American Muslims find themselves holding their heads and groaning over the new wave of sneering and jeering coming their way again. The tidal wave was set in motion last week with the arrest of Ahmad Saleem in Florida in a sting operation that busted a major child sex ring.

Saleem was one of the 100 men arrested in attempting to have sex with girls between the ages of 12 and 14. Police officers in Lake and Polk counties in Florida posed as young girls on chat forums to lure in these predators. When Saleem arrived at the arranged house looking to have sex with a 12-year- old, what he found instead was a detective.

What’s horrifying about Saleem is that his long list of credentials include being a former employee of the Council on American-Islamic Relations (CAIR), a Muslim youth coordinator not only very well known in the Florida area but also in other states, and the founder of Saleem Academy that focused, most ironically, on the empowerment of Muslim youth. CAIR is the foremost Muslim civil liberties advocacy organisation headquartered in Washington DC with state offices throughout the country and significant impact both within the US and internationally.

The plates on Saleem’s car read “Invest in children”. Though only 22, Saleem had built repute for himself across the country by networking extensively with Muslim community leaders in other states through major Islamic forums such as the Muslim Student Associations (MSA) at colleges and universities, Islamic Circle of North America (ICNA), the Islamic Society of North America (ISNA), conferences, and interfaith meetings focusing on youth development.

At present, CAIR, most vocal as an ‘organisation that challenges stereotypes of Islam and Muslims’ working on civil liberties anti-defamation cases, finds itself in hot water over the association of an active young community leader in a scandal as perilous as paedophilia. Prior to the arrest, the CAIR website had nothing but glowing words for Saleem that covered nearly an entire page. A paragraph reads,

“Ahmad Saleem is an active community organiser in Orlando, Florida. He is responsible for spreading CAIR Florida’s impact and presence in the Orlando community which includes serving and protecting the civil rights of the community as well as maintaining healthy relationships with other Muslim organisations, non-profit organisations, government entities, and the media. He is the son of Pakistani immigrants. His father, a paediatrician, and his mother, a school teacher, instilled in Ahmad the joy of caring for others and serving them wholeheartedly with love and dedication.”

However, following the arrest, as expected, CAIR immediately removed all mention of Saleem from its website. The Florida CAIR office also issued a general statement stating,

“CAIR Florida is shocked and deeply concerned by the serious crimes Ahmad Saleem is alleged to have committed. We trust in the legal system to hold to full account any and all persons found guilty. CAIR Florida takes the safety and security of the community very seriously and as such we attempt to thoroughly vet any potential employment candidates through standard hiring practices.”

The paedophilia displayed by Saleem is defined as a sustained sexual attraction for children 13 years of age or younger. Despite the reprehensive nature of the crime, paedophilia is classified as a mental disorder according to the American Psychiatric Association. However, although this bars the sentencing from being as strict as many people would like to believe, paedophilia in itself is considered among the most stigmatised of mental disorders. The negative societal attitude towards paedophiles works as a double-edged sword where it not only affects child abuse prevention but also discourages paedophiles from seeking help.

Studies show that societal attitudes towards paedophilia rank it as being more morally deplorable than even homicide. Although paedophiles may get off with less of a punishment than the greater number of population would like, the absolute and irrevocable societal and personal disgrace and condemnation faced by those caught in the act are worse than a double life sentence.

Saleem threw all caution to the wind in behaving in this manner and vilified not only his own reputation but the name of Islam in the process. Since Saleem’s arrest, the parents of the children with whom he had been in contact at the camps he had organised or the youth groups he ran are starting to get concerned over the exact nature of his behaviour and for how long it had gone undetected. In addition to this, there is a violent spew of derogatory and near blasphemous articles on Islam on the web. All articles invariably bring in and taunt Islam, Muslims and the names of CAIR and the other organisations with whom Saleem had been associated even remotely.

Needless to say, given the image of the ‘perfect Muslim’ that he portrayed with his appearance, words and actions, Saleem has managed to garner an unprecedented level of notoriety for all Muslims with his reckless behaviour. Even if paedophilia is his sickness, it is a pity he did not seek help given the fact that he is the son of a paediatrician and holds a bachelor’s degree in psychology himself.

On a personal note, paedophilia may be classified as a mental disorder but given the nature of its violent repercussions on society, it needs to be treated as a very, very serious crime rather than just a disorder.