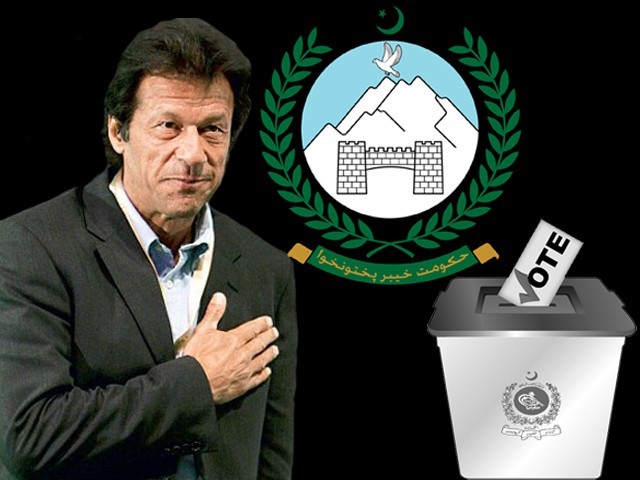 Imran Khan has offered to hold new elections in the province.

Pakistan’s north-western province, Khyber-Pakhtunkhwa (K-P) is ruled by Imran Khan’s Pakistan Tehreek-e-Insaf (PTI) that has been fighting its election campaign promising ‘change’ and ‘real democracy’. While Imran missed the opportunity to become prime minister of Pakistan by a huge margin, the party managed to gain majority in K-P and hence has been ruling this province since last elections.

One might think that PTI is now busy proving to Pakistanis that, in the next general elections, it would be worth voting for them and the ‘change’ they want to bring, by showing how much they have achieved in this one province to justify their credentials to change the remaining provinces as well. But last summer’s failed sit-ins by Imran and his party colleagues – that had blocked business in the capital for weeks and converted it into a stinking garbage dump – made it clear that ‘change’ in K-P was no priority for PTI and its leaders. During the tamasha in Islamabad, the chief minister of K-P, instead of ruling his province and bringing progress there, sat in an air-conditioned container listening to the beats of Pakistani pop.

Since then, more bad news has arrived from the ‘changed’ K-P.

The recently conducted local bodies elections were marred by frequent violence, with party representatives, armed with lathis and even guns, fighting in front of polling stations with the police – who were either standing by or incapable of securing law and order. Several people lost their lives in the process, amongst them a PTI activist Habibullah.

A day after the local government polls, the Free and Fair Election Network (FAFEN) in its preliminary report pointed out irregularities and mismanagement as the major issues reported by its 987 observers from 462 wards of 24 districts in the province. One issue noted by FAFEN was the lack of education amongst not only female voters but polling staff as well, which was unable to guide the women who came to vote that day but were unable to do so because of the confusing procedures.

Similarly, many female voters did not even come out to vote, given the lack of security around polling stations. Here, one begs to question PTI’s leadership: couldn’t the party at least create such an environment where they could employ female volunteers at the polling stations who could have motivated and helped female voters? These volunteers could have helped those women, who were afraid of going to the stations physically, by telling them about postal ballots and how to cast them.

This could have made a lot of difference.

After this fiasco, the media surprised the public by reporting that ANP leader Mian Iftikhar Hussain had been arrested under charges of murder of PTI worker Habibullah. Imran, during a press conference on Sunday, said that Hussain’s arrest was not at all politically motivated and that the K-P police was not under the political influence of PTI. This statement turned out to be a plain lie as a day later we learned that the father of the deceased said in court that he was pressured by the police into registering a case against the Awami National Party (ANP) central general secretary for the murder of his son.

During the hearing, the victim’s father Sher Alam stated that neither the ANP leader nor his guards were involved in the murder of his son and two days later he was released on court orders. To justify their actions, the police tried to convince ANP supporters that Hussain was taken into custody in order to protect him from the enraged PTI crowd which had gathered outside his house after Habibullah’s death.

So much for good governance, apolitical police force and provision of tight security in the province.

There is no doubt that the local-bodies elections have been mishandled completely by the PTI government. While PTI is trying to shift the blame on to the Election Commission of Pakistan, it should understand that the people of K-P are not fools. Everyone saw how a PTI provincial minister took the ballot boxes and was about to flee with them in his car. Even though the said minister was handcuffed and arrested, this doesn’t help in making PTI’s image better. Blunder after blunder, PTI has done everything to tarnish its reputation.

Because of the uproar that has ensued ever since the mismanagement and possible rigging on the elections have surfaced, Imran has offered to hold new elections in the province.

Does this not prove that the PTI failed as a provincial government?

What a blame for a party and party leader who claimed and wanted to be different! What will happen in 2018 when the next general elections are due? It seems that another hope for betterment of many Pakistanis, especially young ones, has proven to be in vain.

This should make us think about whether change can ever come in this country; and if yes, then from where? Surely, not from PTI. And every other party has lost its credibility. So where does this leave Pakistan?

As in the case of fighting radicalism, the solution lies probably in a process that involves ideally all of us or at least a majority of us. And, of course, we need to learn from history to make sure that we do not repeat the same mistakes.

And here, specifically, we need to focus on the last general elections.

In order to understand the underlying issues of the 2013 elections, we need to take a step back and see exactly in what context the previous elections were held. According to our system, after the ruling party completes its tenure, a caretaker government is installed by consensus of the prime minister and the leader of the opposition in the centre and between the respective chief ministers and leaders of the opposition in the provinces, for 90 days, to hold free and fair elections. The policy of appointment by consensus also applies on all constitutional appointments, including the appointment of chief election commissioner.

So what we saw as a result of this constitutional gimmick was that two saner-aged retired judges, who could hardly take that work load on their shoulders, were nominated as chief election commissioner and the caretaker prime minister through the most questionable consensus formula inserted in constitution through an amendment. The varsity of 2013 election was doubtful from day one and now the media has shown that on the fourth day of election, the caretaker cabinet, while reviewing the conduct of elections, openly admitted of massive rigging during the polls.

This was followed by all the prominent party heads publically announcing massive poll-rigging which led to the resignation of the chief election commissioner. Yet, for the most part, it has only been PTI which has been vocal about the rigging in four constituencies, which led to the infamous dharna.

However, now, that the tables have turned and the judicial commission is about to finalise its findings for the K-P elections, PTI’s claims appear to have been compromised by its team of lawyers, who did not call certain politicians to give evidence in support of their claim.

Why is this so? What is it that PTI wants to hide?

This reminds me of a federal minister, when he contested for the National Assembly elections from Lahore in 1977 against Pakistan National Alliance (PNA) and tried to do something similar as the PTI minister who took the ballot boxes in his car. He was caught on camera and his picture appeared in the morning newspaper the next day. This led to PNA boycotting provincial polls on March 10, 1977. Prime Minister Zulfikar Ali Bhutto conceded to PNA’s demand for a re-election in October 1977, which was sabotaged by massive agitation and loss of innocent lives and it eventually led to General Ziaul Haq’s coup d’état on July 5th.

Today, it seems Imran is in Bhutto’s position.

He has offered to hold re-elections but not conceded to resign in K-P, which is a constitutional requirement and if this happens than the varsity of 2013 elections are known to all and has been proven that ECP did not adhere to fulfilling its responsibility in a proper manner when even forms 14 and 15 had been not complied with. So the government in Islamabad also has to step down to bring in a caretaker interim setup to hold fresh elections, which is going to be another exercise in futility seeing the overall governance, law and order situation and the overall temperament prevailing among our so called democratic players.

The only way out in the near future will be to change the system to proportional election in which two tiers of elections are held and leader of majority party is elected president, who forms his cabinet after evaluating capacity and suitability of a person for that slot and not forced under political party or group pressure through black mail and the likes.

There is no use waiting for a blessed leader who will descend upon us and lead towards heaven on earth. True change includes changing ourselves and the present system to start with. The most important vices of ours that have to be fought are lying, cheating, blackmailing and trying to avoid the law in our personal lives and in business by burring the feudalism and adhocracy for all times to come from our body politics.

Then wait and see; the law of nature will act to grind all this foul play. And I believe this time the wheel of nature will move fast and grind everything.