Has the Islamophobia network in America taken a new turn? 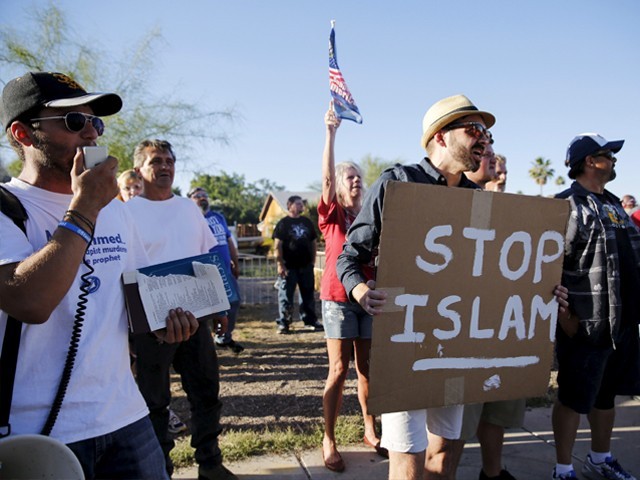 A demonstrator shouts and carries a “Stop Islam” sign while another rips pages out of a Quran during a “Freedom of Speech Rally Round II” outside the Islamic Community Center of Phoenix, Arizona on May 29, 2015. PHOTO: REUTERS

Since the tragedy of 9/11, Islamophobia has been persistently on the rise in America. The anti-Muslim rhetoric from the far right and the new atheist community continues to serve as fuel for the growing climate of fear, hate and suspicion of Muslims in America.

Just this past Friday, a significant anti-Muslim rally was held outside a mosque in Phoenix, Arizona. It was significant, not in terms of numbers, but for the fact that the anti-Muslim protestors came fully armed, some with weapons of military calibre. As they displayed their arms and chanted profanity against the Islamic faith, innocent men, women and children prayed peacefully inside.

Here are the right wing nuts protesting the #PhoenixMosque. Apparently, they fail to see their resemblance to ISIS. pic.twitter.com/adKnoydRww

Irony: So a group of guys with beards who look like ISIS stood outside a mosque with AK47's? #PhoenixMosque pic.twitter.com/NglTmTb5Ap

This is the first anti-Muslim rally of its kind in the United States and an indication that worse might yet be in store. I hope I am wrong, but it is true that extreme phobia of minority communities has historically been a precedent for violence against its members. This Islamophobia is not a random phenomenon. It is calculated, and is being disseminated through well-funded propaganda. The ‘Islamophobia network,’ as it has come to be known, comprises of funders, organisations, media outlets, propagandists, activists and political players as well.

The machinery thrives on the average American’s ignorance of Islam and Muslims.

The initial reaction of Muslim Americans to the events in Phoenix was obviously one of disgust. We could not imagine innocent women and kids who had only gone to the mosque to pray, being subjected to intimidation by armed thugs. However, our frustration quickly changed to happiness as we witnessed our fellow Americans flocking to the scene of the protest to form a line of protection in front of the mosque. Most of them wore blue shirts, and in time these pro-Muslim protestors outnumbered the haters. They were holding up signs promoting messages of love, peace and outreach. This human shield was referred to as “the blue line of love” on social media. This blue line was proof that love is stronger than hate, and that our fellow Americans would readily protect their Muslim neighbours from ignorant bigots amongst our midst.

Protest I-17, Glendale in #phx Police helmet shields down, between anti-Islam protestors, others, live on #12News.com pic.twitter.com/EuU7OWJtIi

This is what #America looks like protecting #PHxMosque this evening. 20 of @PamelaGeller's gang bangers were present. pic.twitter.com/rXkWtXcZX2

Toward the end of the protest, Muslims invited the anti-Muslim protestors into the mosque. Not surprisingly, the two that accepted the offer returned home from the protest with a completely changed mindset. The Washington Post quoted one of them saying:

“It was something I’ve never seen before. I took my shoes off. I kneeled. I saw a bunch of peaceful people. We all got along. They made me feel welcome, you know. I just think everybody’s points are getting misconstrued, saying things out of emotions, saying things they don’t believe.”

The other, who was proudly carrying an anti-Islam profanity-ridden message on his shirt, removed his shirt and assured the Muslims he wouldn’t wear it again. He was embarrassed at his own ignorance. Such is the power of outreach and dialogue. The protestors hated on Muslims out of ignorance and misinformation, thanks to the Islamophobia network. And those who dared step out of this echo chamber of hate – and into the mosque – were left astounded. They probably thought Muslims would blow them up if they went into the mosque. The only thing that blew was their minds.

Here's the dude at the anti-Islam rally in Phoenix wearing the white supremacist t-shirt pic.twitter.com/xEs0h7FFRK

It was equally heart-warming to see Christians and atheists take to social media to condemn and disown the minority of right-wing Christians and new atheists who were behind this embarrassing display.

Such hate and fear mongering of a minority community is not peculiar to America at all. In fact, we know this phenomenon far too well here at home in Pakistan.

Reminiscent of the Islamophobia network, the anti-Ahmadi network is a thriving industry in Pakistan. It comprises of funders, organisations – like the anti-Ahmadi Almi Khatme Nubuwwat group – and propagandists that use right-wing media outlets to promote hate speech, and political players that reinforce this same bigotry time and again.

To be fair, the Ahmadis in Pakistan have it far worse than the Muslim American community. Right-wing clerics regularly engage in hate speech against the Ahmadis and hold rallies calling for their expulsion, further banishment, and boycott. Some clerics even call for their death openly, without fear of any legal consequences.

Unlike America, where the police came out to protect the Phoenix mosque from the mob of haters, police in Pakistan routinely turn a blind eye to religious zealots in destroying Ahmadi mosques. Over a hundred Ahmadi mosques in Pakistan have been desecrated, burnt, closed down or illegally occupied since President Ziaul Haq’s implementation of the notorious anti-Ahmadi laws in 1984.

Unlike America, we do not see any blue lines of love in front of Ahmadi mosques either. The bigots have a free hand in intimidating and terrorising Pakistan’s Ahmadis right in front of their homes and houses of worship. They don’t just stop at swearing, but engage in open violence against the community time and again.

Unlike America, we don’t see any section of mainstream media questioning the bigots on television either. Nor are representatives of the Ahmadi community welcomed on media platforms to present their story and express their own grievances. At least in America, we are able to present our view on issues related to the Muslim American community.

The Islamophobia network is as malicious as the anti-Ahmadi network in Pakistan. The difference is the extent to which the state and society has bought into it. In Pakistan, the venom has infiltrated the very top and penetrated the very bottom of our society to a much higher degree. The state has specific laws penalising the Ahmadis for their freedom of religion and expression. The public opinion of Ahmadis in Pakistan is also extremely disheartening, and makes the very low 40% ratings of American Muslims look surprisingly great in comparison.

When will we form our own blue lines of love against the prevalent anti-Ahmadi bigotry in Pakistan? When will we use our voice to drown out those who seek the Ahmadis harm? When will we give them a platform to counter the one-sided virulent hatred spewed at them?

While the silent majority answers these questions, the ignorant soldiers of the anti-Ahmadi network in Pakistan should consider the Phoenix mosque’s message of invitation. Instead of choosing to live in ignorance, they have the power to shed it off. Reach out to fellow Ahmadis. Connect with them. Go visit their mosques. Befriend them. Talk to them.

Otherwise, you’d just be emulating the example of the majority of the anti-Muslim protestors who left without visiting the Phoenix mosque, choosing to carry on with the burden of hate and ignorance. It is indeed a heavy burden to carry.